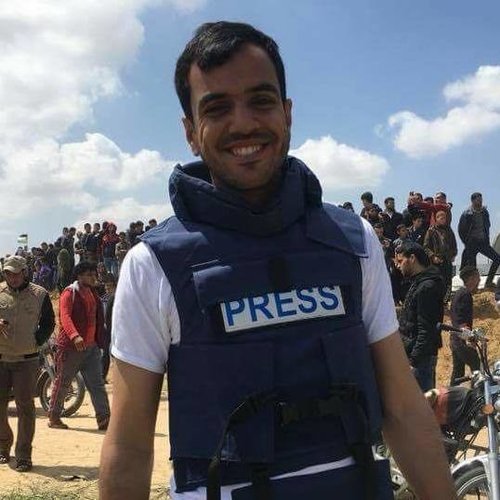 In August 2017, Al Jazeera World produced a documentary called “Gaza: Surviving Shujayea.” Much of the footage was shot by Yasser Murtaja, the 30-year-old Gaza journalist who was among 10 reporters shot by Israeli snipers since the six-week “Great Return March” kicked off in the blockaded Strip (to date, he is the only one who died).

Watch this documentary and it quickly becomes obvious why Murtaja’s funeral was attended by hundreds of residents from all over Gaza, from the most senior political officials to the many children who loved to follow him around. The documentary showcases his skill as a videographer for Ain (“Eye”) Media. He risked entering Shujayea along with paramedics following the Israeli massacre in July 2014, despite their inability to obtain a permit from the invading army to enter the community. Eight-year-old Bisan Daher was trapped in the rubble of her home along with two other family members (five others already had died) and Murtaja documented the daring rescue. His close-in shots foreshadowed the courage he showed by photographing Palestinian protesters near the Israeli border (reportedly about 300 meters away).

According to the Palestinian Center for Human Rights (PCHR), Murtaja was recording the events—while wearing a blue vest prominently labeled “press”—when he was hit in the abdomen by a sniper’s bullet, rupturing the main artery feeding his intestines; he was declared dead after 12 hours of severe internal bleeding.

“The facts on the ground confirm that no threat was posed to the soldiers' lives,” said the PCHR in a statement. “Murtaja and the other journalists were separated [from Israeli soldiers] by three security fences and fortifications with a huge sand barrier and personal shields. This confirms the absence of any possibility of a real threat to the soldier's lives.”

Nedal al-Weheidy, a fellow journalist and friend of Yasser’s who was with him when he died, agreed: "Once the Israeli forces opened live fire toward us, everyone began running helter skelter,” recalled “I saw Yasser laying on the ground. His face was shocked; he didn't want to die.”

Some of the final footage shot by Murtaja (right) was obtained using a small drone, a tactic for which the photojournalist was known and that has become a common technique among journalists. Some of Murtaja’s compatriots speculated that this is why Israel targeted him, although his Ain Media colleagues insist the young man was not using a drone at the time he was shot.

Ezz Abu Shanab, chief editor of the Skypress media agency, was injured by a bullet in his foot. “I was standing with my staff on a low hill, about 200 meters away from the protesters. We were clearly identified as journalists, wearing our press helmets and jackets. Suddenly, we found ourselves being targeted directly by Israel’s snipers. One of my staff members survived a bullet that hit his protective jacket and I got one in my foot.’’

The Palestinian Center for Development and Media Freedoms (MADA) is calling for the formation of an independent commission of inquiry to investigate the killing of Murtaja and the disproportionate use of excessive force by Israeli forces against journalists. MADA officials add that with the targeting of Murtaja, 42 journalists in the West Bank and Gaza Strip now have been killed by Israeli forces since the beginning of 2000.

The international Reporters Without Borders (RSF) joined the condemnation: "Palestinian photographer Yasser Mutaja was wearing a vest marked ‘press’: He was obviously the victim of an intentional shot," said Christophe Deloire, secretary general of RSF on Twitter. "RSF condemns absolutely the deliberate shooting of journalists by the Israeli army."

The Al Jazeera documentary showed more than Murtaja’s skill and bravery however; it also reflected his big heart. He later befriended the little girl whose rescue he filmed, helping to brighten her life after the trauma of losing so many of her family members, as documented in the program.

Unfortunately, Murtaja never had the opportunity to share his heart and talents beyond Gaza. The closest he had come to leaving Gaza had been in February, when he left the Gaza Strip through the Rafah Crossing into Egypt. However, after hours of waiting on the Egyptian side of the border, he was turned back due to the unstable security situation in the Sinai.

In his last post on his Facebook account on March 24, he expressed his yearning to travel. (Al-Weheidy said Murtaja’s dream was to travel to Turkey to exhibit his images of Gaza.) Murtaja shared an aerial picture of Gaza City's seaport captured by his drone and said, "When will the day come when I can take such a picture while I'm in the sky, not on the ground? My name is Yasser, I am 30 years old, I live in Gaza City and I've never traveled in my life!"