Will 2018 bring a third intifada in Gaza?

Will 2018 bring a third intifada in Gaza? 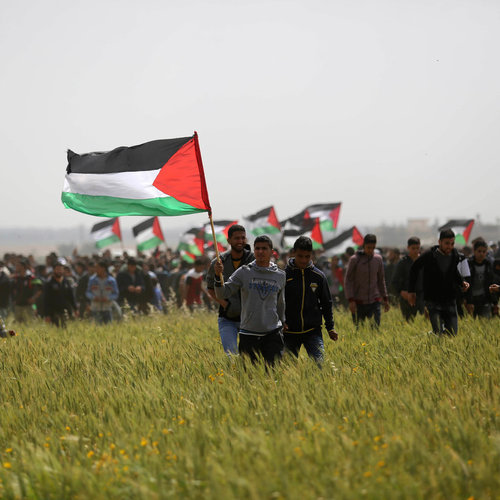 What drives the Palestinian youth of Gaza to demonstrate at the border, despite Israel’s retaliation (as usual) with snipers, exploding bullets and a seizure-inducing tear gas? Why do they insist on resisting, even though it's an almost ludicrously asymmetrical confrontation—flags and rocks against heavy munitions? Is it worth such a sacrifice in blood?

It's been more than a decade since the last true intifada. And although there have been sporadic demonstrations in the Gaza Strip since then, another civil uprising against Israel has yet to occur. At least until now.

Although Gaza City was where the first intifada erupted in 1987, Israel's evacuation of its settlers from the Strip in 2005 and the blockade that followed two years later effectively isolated the population. Palestinians in the West Bank confront Israelis daily–particularly in contested Jerusalem–while Gazans see them only from afar, behind guns in watchtowers (or from tanks during assaults). The only contact has been the three wars—2008/9, 2012 and 2014—that erupted between Gaza’s small resistance forces and Israel’s massive military machine.

The spark for a new mass uprising was ignited in December, when U.S. President Donald Trump declared his recognition of Jerusalem as the capital of Israel. Gaza residents of all ages flowed to regular Friday protests. Shortly after, Israeli soldiers fatally shot Ibrahim Abu Thuraya, a 29-year-old double amputee, in one of the resulting protests—fanning the simmering embers into stubborn flames.

Then came the Great Return March, launched on Land Day, March 30. Its model for resistance reflects the previous intifadas—banners, flags, stones and an occasional Molotov cocktail against heavy weaponry, but winning the contest for public sympathy. The Palestinians who are participating this time represent the new generation of Palestine. They are the descendants of hundreds of thousands of Palestinians who were forced to leave their homes in the 1948 Nakba (creation of Israel) and now live as refugees.

The new Palestinian generation in Gaza was raised with the atrocities of occupation; they are “normalized” to life in an open-air prison, fenced off from the outside world—barred from access to the outside world via land, sea and air. One consequence of the blockade is that Gaza youths have never been able to meet their compatriots in the West Bank, much less see their most coveted place to visit, Jerusalem. They are forced to settle for photos and television. As for their ancestral homeland, they listen to tales told by their grandparents.

Why the Great March of Return?

However, that does not mean they accept this reality. As the saying goes: “The old may die, but the young will never forget.” Resentment is alive and simmering as negotiations among world leaders (without their voice) drone endlessly on with no result. Trump's recognition of Jerusalem as Israel's capital sent a final bullet to the heart of the Palestinian cause, targeting the central and most sensitive issue for Palestinians, who regard East Jerusalem as the capital for their future state.

The holy city of Jerusalem long has represented a red line for the Arab and Muslim world. It was the spark for the second intifada in 2000, triggered by Ariel Sharon's visit to the al-Aqsa Mosque compound as a political ploy. In 2017, when Israel installed metal detectors, cameras and iron gates in the mosque compound, unrest flared anew—even in Gaza.

Adding further fuel to the fire, Trump punished the Palestinians for their resistance to his recognition of Israel’s claim to Jerusalem by withholding funding for UNRWA, the UN refugee agency for Palestinians. He defiantly announced the U.S. embassy would be transferred from Tel Aviv to Jerusalem May 14 (just one day before the 70thanniversary of the Nakba).

For the first time in years, the phenomenon of rage protests is resurging in Gaza. Along with anger at U.S. actions, Gaza is being squeezed in a blockade-induced vice: high unemployment, severe shortages of electricity, and a broken water- and waste-treatment system—just to name a few of the reasons why the United Nations predicted the Strip would be unlivable by 2020. Frustration on the Palestinian street is further stoked by a prolonged and rancorous division between the two ruling political parties.

The six-week protest that launched March 30 is scheduled to extend until May 15. Tent encampments are set up at five locations near the Gaza border with Israel: Beit Hanoun, two spots in Gaza City, Khan Younis and Rafah. Several thousand protesters stay in the tents all week and every Friday, up to 250,000 residents descend on the camps and venture as close to the border as they can without being picked off by snipers. Despite claims to the contrary by the Israelis and in the media, the various political factions are participating but not in control. No party flags or banners are allowed and mobilization outside the march itself is focused on activities such as planting olive trees, reading and listening to elders’ stories.

Ibrahim Hasna, 22 and unemployed, is typical. He says his grim prospects, which he blames first and foremost on the Israeli blockade, is what drives him to participate despite the risk.

"We began our day standing peacefully away from the border," Ahmed recalled of the first day. "But the level of violence we saw from the Israeli forces provoked us and we went closer, to a few kilometers from the fence. I wanted to set the Palestinian flag in front of their eyes to show them we're not afraid.

"When they opened fire, we hunkered down on the ground until the teargas began to suffocate us, and we were forced to stand and run. Once we started running, my companion was shot in his back and I was shot in my thigh,” he said.

Abu Hasna and the others are not deterred, however. Palestinian youth have nothing to lose: Either they risk their lives in protests or die slowly every day in Gaza. Some are starting to think, "when the two-state solution becomes impossible, then we might as well demand the entire land." One has to wonder: Does Israel understand the storm it will reap when depriving Palestinian youths of all hope?

May 15, which coincides with the first day of Ramadan—the Islamic holy month of fasting—is shaping up to be a tinderbox. The prospect of a third intifada looms large.

First published by The New Arab.