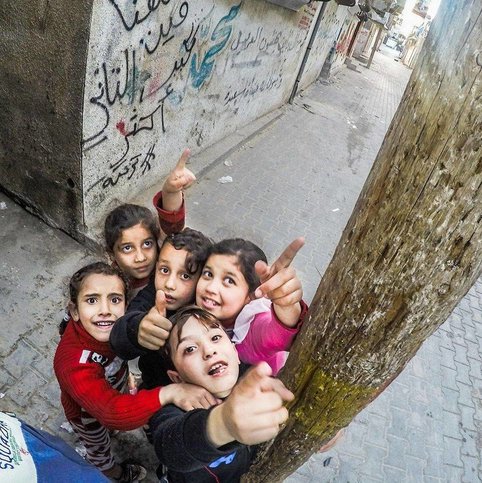 The power just went off and I need to get some work done. It's 5 p.m. and the electricity won't come back on until tomorrow morning. Where to go? All right, to Cordoba then. Cordoba is a restaurant and cafe in western Gaza City, where Palestinian heritage and history are showcased in the wallpaper, photos and other decorations. But it's also a place where youths meet, especially those who need to charge their laptops regularly, such as translators and graphic designers.

I took a cab from my house in Sheja'iya, eastern Gaza City, to Tal Elhawa, western Gaza City. One minute later, the taxi driver stopped for two children, apparently brothers who were about 11 and 13 years old, and asked: “Where to?”

Right before they got in, one of the kids murmured to the other, something I couldn't hear well. But I could sense a tone of fear or reluctance.

“Yeah, get in,” said the taxi driver.

"But you know, ammo (uncle), we've just lost the two shekels we were supposed to use to pay you!"

Less than one minute passed, and the kids starting arguing in low voices. The radio was a bit loud, and I couldn't hear them well. So I lied.

I was curious to know what the two kids were talking about. I'm often inspired by children and I love to listen carefully to them. Also, I can't quite let go of the child in me. In a sense, he is the truest version of me. Life with its ups and downs has shaped a lot of who I am today, yet I still have "access" to that child. So, I took out my mobile out of my pocket and randomly pressed buttons, trying to need to look like I was about to make a call, while not interrupting the kids' talk or attracting their attention.

The younger kid addressed his brother softly, but in a scolding tone: “Why did you do that? Didn't mom tell us not to ever lie? You could've simply told ammo we don't have money, or we could've walked home on foot instead.”

His older brother was silent, unable or unwilling to express the shame he clearly felt. Now, I knew it had not been fear in their voices, but embarrassment. My heart felt weighed down by sadness and my own shame. I had made the same mistake. I wished I hadn’t lied when I said I wanted to make a call, just so the cab driver would turn the radio down. I wished I hadn’t heard their sad story. I didn’t need to pry.

"You know what, you can turn it on now. I will call later," I said to the driver. No more.