War is leaving the house barefoot

War is leaving the house barefoot 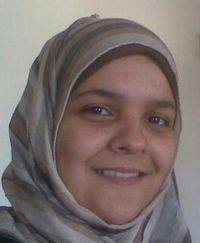 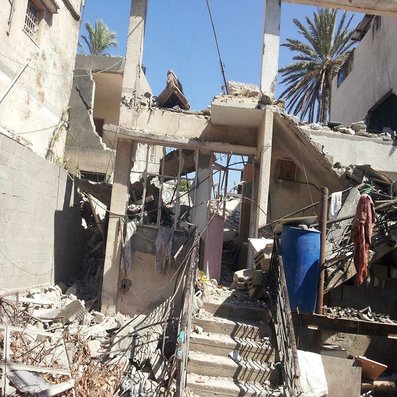 Boom! It's 3:05 a.m. We wake up for suhour, the pre-dawn meal in Ramadan, after a long and horrifying night made worse by the oppressive presence of Israeli surveillance drones in Gaza's sky. Friends on my Facebook newsfeed complain of sleep deprivation and continuing Israeli air strikes around them.

The radio has a poor signal, so I turn it off. My 2-and-a-half-year-old niece flinches as a deafening explosion strikes a nearby area. Her forefinger pointing upwards, she exclaims, "wawa!" (a colloquial Arabic word babies use to express that they are in pain).

On July 7, Palestinians found themselves in the throes of yet another Israeli aggression. Thirteen days into the Israeli onslaught on Gaza, more than 400 Palestinians have been killed, most of them civilians. At least 77 children are among the dead. Thousands of people have been injured and more than 50,000 displaced. Some 15,000 houses have been destroyed or severely damaged, and dozens of fishing boats have been burned, destroyed or damaged.

Buidings and humans: both targets

The main water line for the Al-Shati refugee camp in Gaza was bombed and damaged, while 50 percent of sewage pumping and treatment centers are no longer operating. A home for the disabled run by a charitable center was destroyed, killing two women and injuring others. A kindergarten was hit and damaged. A rehabilitation hospital was targeted. The house of police chief Tayseer Al-Batsh was hit by two Israeli bombs, critically injuring him and killing 17 people of the Al-Batsh family. Four children playing on the beach were slain as an Israeli gunboat targeted them in broad daylight. Another three children were killed while playing on the rooftop of their house. The list goes on and on.

Palestinian armed groups have fired a barrage of rockets into Israeli territory in response to Israel's occupation and illegal blockade of the Gaza Strip (with Egypt's complicity), its shooting at Palestinian fishermen and farmers, and frequent bombing. Sirens go off in Jerusalem, Sderot, Tel Aviv, Isdoud, Ber Saba' and other areas, forcing Israeli citizens into shelters. So far there have been two civilian deaths in Israel and five Israeli soldiers have been killed in clashes with Palestinian fighters.

In late afternoon on July 16, the house of my deceased grandparents – home to four families and 12 people in East Gaza – was bombed. My uncles and cousins received no phone call, no messages, nothing (not that a phone call telling you "we'll bomb your house" makes it any better). The distance between their house and that of their neighbors is less than a meter. No rocket could have possibly been fired from their house into Israel. And, yet, an Israeli "targeted" strike hit them. When the first missile fell, they ran out of the house. My uncle and 70-year-old aunt sustained injuries but they all miraculously survived.

Homeless, in every sense of the word, they are now split into relatives' homes. Their house has been completely destroyed. Most of their belongings remain in the street; they visit every morning, trying to find and pull out of the rubble anything still fit for use. My uncle's wife, an agricultural engineer and a lifelong embroidery enthusiast, laments, "How did I not take my embroideries? Why did I leave without them?"

We are still in the holy month of Ramadan, a time of spirituality, reflection and religious devotion, when people socialize outside and at home with family and friends. Mornings and evenings of Ramadan are no longer the same, though. Most workplaces are closed. People do not go to school or work. They are careful not to go out a lot, although many Palestinians still venture out to get food and perform Taraweeh – evening prayers. At night, most people, except for medical staff and journalists, remain indoors.

War is horror. War is our vulnerability and helplessness. It is our inability to protect family and friends. It is deciding not which area in Gaza is safer, but which one is less dangerous. It is packing official papers, a bottle of water, life savings, a mobile phone with a dead battery, and, above all, memories into one small "emergency bag" and forgetting the bag altogether when your house is shelled. War is having no time to say goodbye to your window, or the stickers on your wall, or a piece of embroidery, or that crack in the door you always hated. War is leaving your house barefoot. War is your grief aired live on TV. War is humiliation. War is remorse for things you have not done. War is traumatized children and traumatized adults. War is broken hearts and scars that do not heal.

It can all end in a minute

War is the painful abruptness of loss. All it takes is a minute, or perhaps less than a minute. A sky lantern lights up the whole area around the "target,” guiding the Israeli apache or F16 through the dark Strip. A terrifying whoosh accompanies the missile as it falls upon the house. Screams and silent tears. A last declaration of faith in Allah and his messenger. A last breath. The sky lights up again. A massive explosion is heard outside. Smoke clouds the area and the air around smells of death. Flames erupt. The explosion echoes in your ear. In seconds, someone's memories are buried under the rubble of their home. Someone's loved ones are gone forever.

It is 3:30 a.m. I hear the third boom in a span of only a few minutes as a reminder of the war. War is waking up for suhour not by an alarm clock, but by a blast. Faces are pale and food is tasteless. Time is meaningless. Power is now off and there is no way I can make sure my friends are alive. My niece, still crying and terrified by the sounds of bombing, yawns, her tears lulling her to sleep. I turn on the radio again only to hear about Western leaders staunchly asserting, from the comfort of their countries, the right of our oppressor to "defend" itself, while simultaneously denying a defenseless and besieged population that right. I smile at the irony of it all as another explosion roars in the background.