Anatomy of a viral photo

Home » Anatomy of a viral photo

Anatomy of a viral photo 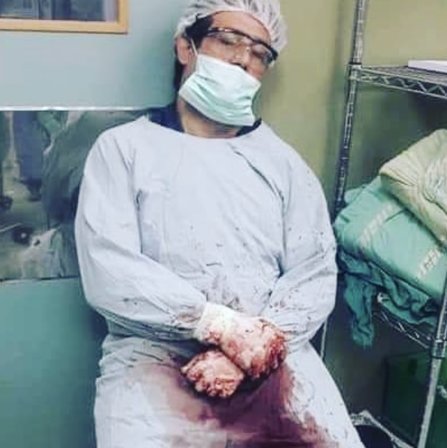 On May 14, 2018, this photo of a Palestinian doctor covered in blood went viral on social media. But while many people shared the photo, most had no idea who he was or how and when it was taken. Here is the story behind the doctor and his famous photo.

Adnan al-Borsh, 44, was born in Gaza’s city of Jabalia, one of the densest areas in the strip and long known to be a “home” of resistance. It is these roots that inspired him as a young man to study orthopedic surgery. It was after several of his bones were broken by Israeli soldiers while protesting during the first intifada that he chose his future career.

Dr. al-Borsh studied medicine in Romania, then moved to Jordan to continue his development. He was chosen along with two other physicians for a one-year fellowship in complex fracture surgery at King’s College Hospital in London.

“I chose this field to serve my people, who too often are in need of this type of medicine,” he explained. “Breaking bones has always been an Israeli practice, initiated by [former Prime Minister] Yitzhak Rabin.”

In addition to his medical studies, Dr. al-Borsh earned a master’s degree in political science from Al-Azhar University in Gaza, to educate himself on regional and global politics that affect life in Palestine. He tried to make a connection between medicine and politics in his thesis, which was titled “Israeli policies and its effect on the local health situation/fate.” He focused on how Israeli actions cause health conditions to deteriorate in Gaza and the West Bank.

Today, with the advent of the Great Return March protests just a year ago, Dr. al-Borsh is putting his specialty to work a bit too much, he says. About 80 percent of the injuries requiring hospitalization involve bullet wounds in the legs.

One of the worst days was May 14, 2018—when the U.S. government moved its embassy from Tel Aviv to Jerusalem, resulting in anger at the borders.

The medical staff was ready at Gaza’s largest hospital, Al-Shifa, at 7:30 a.m. and they began to receive a flood of injuries less than two hours later. There were not enough rooms and doctors to operate on all who needed it, so they triaged those in the worst shape. The Orthopedic Department received about 85 patients that day and Dr. al-Borsh alone had to operate on 28.

“The picture was taken at 1 a.m., after a long day of surgeries. I was about to finish taking care of a patient who was shot in both legs and was in bad condition.”

At that moment, Dr. al-Borsh could not stand on his feet, so he asked a colleague to finish up, allowing him to rest for a minute. Instead, he fell asleep as soon as he sat in the chair. One of his colleagues took the photo of him as a joke. Later, his colleague woke him up to discuss the patients they had treated and showed him the picture. Dr. al-Borsh warned him not to share it on social media, since it might disturb people. However, al-Borsh sent the photo to an Egyptian doctor and photographer, Ahmed Thabet, who shared it with a few others to show the tough reality of being a doctor in Gaza. And the rest, as they say, is history.

Dr. al-Borsh believes the Great Return March is a mostly peaceful phenomenon that calls attention to Palestinians’ legal right to return to their ancestral homeland. He also censures Israelis’ immoral and disproportionate response—resulting in more than 200 deaths and more than 17,000 injuries. It frustrates him when the media blame protestors for protesting, but never blame Israeli soldiers for shooting unarmed Palestinians.

He adds, “From my direct experience with the march injuries, I can state that the Israeli army is following a new strategy of creating a disabled generation by using destructive types of bullets and deliberately shooting protestors in their joints.”

However, Dr. al-Borsh is worried about the psychological, physical and financial burden of the protests. Physicians in the field and in the hospitals work for long, grueling hours in return for meager salaries.

“We are usually compelled to do two surgeries in the same room, sometimes even in the corridors,” he says. “And we are forced to give priority only to the most critical injuries at the time, which means some must wait for needed care.”

When international medical crews visit Shifa Hospital, he says, they are stunned at the number of injured persons received. They said their own, advanced hospitals would collapse if they received such a large number of complex injuries.

Even before the protests, the hospitals in Gaza were dealing with a crisis, due to the 12-year blockade. He says, “There’s a lack of medical equipment, doctors, medicine, beds, etc. The Great Return March, on top of that, dramatically drains the health sector in Gaza. We are forced to use methods and equipment that hospitals abroad stopped using a long time ago.”

In addition, the lack of beds and rooms forces doctors to discharge patients earlier than desirable.

The wounds from the 2014 Israeli war on Gaza were not as catastrophic as those from the Great Return March, adds Dr. Borsh.

“GRM participants are deliberately shot in a specific part of the body, mainly the lower limbs, using explosive bullets that tear up the bones and tissue,” he explains. “We didn’t see that during the war.”

The most challenging aspect of the Great Return March injuries, he adds, is the high risk of amputation.

“Our doctors do their best not to amputate as the first option. We are very proud that no more than 150 out of 5,000 such injuries have resulted in loss of lower limbs,” he says.