Home » This is Gaza too: art and the pursuit of freedom

This is Gaza too: art and the pursuit of freedom

This is Gaza too: art and the pursuit of freedom 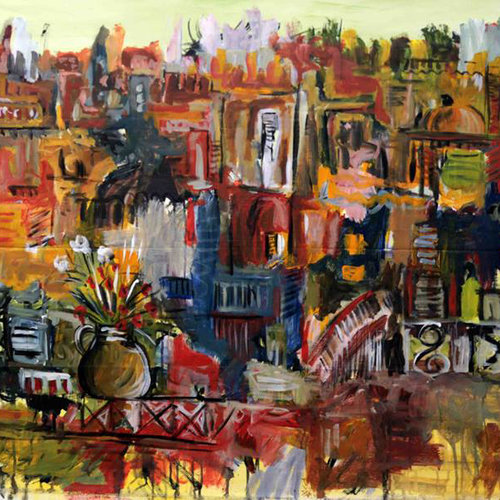 We Are Not Numbers is devoted to telling the stories of Gaza. Most of our members choose to share their truths via the written word. But the talent of others calls them to express themselves through paint on canvas or the lens of the camera.

One of those artists is Basel El Maqosui.

“I have liked drawing ever since childhood,” he says. “I was very good at it during my school years, but I was not able to pursue any higher education because of the lack of art colleges and universities in Gaza.”

In 1995, however, Maqosui participated in an arts training session offered by the YMCA in Gaza. That experience was the beginning of his “love affair” with modern art.

That passion was further developed during the summers of 2000-2004, when he traveled to Jordan to train with a German professor originally from Syria, Marwan Qassab Bashi. Five years later, Maqosui partnered with two colleagues to establish Shababek, an arts studio and gallery in Gaza.

Nonetheless, earning money from art is next-to-impossible in Gaza, where poverty is high and disposable income is so tight for almost everyone. Thus, to support his family, Maqosui teaches art to deaf children at the Jabalia Qualifying Association.

“In Gaza, traditions and the Islamic religion prevent artists from engaging in their talents to a full extent,” he explains “But even more than that, the Israeli blockade and restrictions imposed by Egypt prevent us from marketing our artistic work in galleries outside of Gaza. We also are unable to travel and participate in workshops outside of Palestine, or even inside, in places such as Jerusalem, Ramallah and the land now called Israel.”

And then there is the difficulty in importing art supplies. Thus, in times of shortage, such as last summer’s assault, Maqosui and others turn to the camera and the computer: digital art and photography—which they then share with the world through the Internet, particularly social media.

In October, Maqosui will travel to New York, USA, for an artist-in-residence program sponsored by the I-Park Foundaton.

What inspires Maqosui the most? “My people,” he says. “Their problems and their demand to live in dignity and freedom.”