Home » The wedding earrings: a tale of love and loss 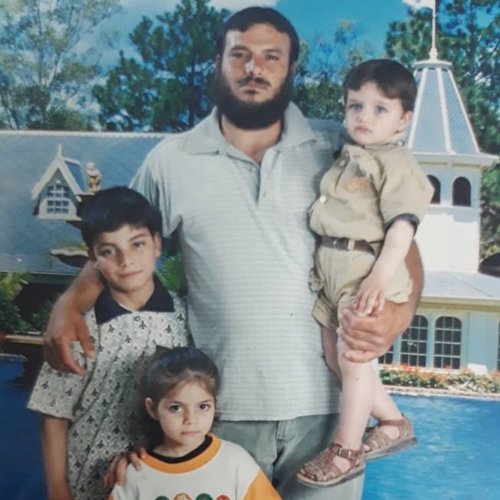 The greatest bearers of pain often are those with the widest smiles. Recently, I encountered a real-life example of that truism.  We participated together in an academy for freelance writers and translators, and he discovered I write for We Are Not Numbers. And so, he asked me to share his story. It is a great honor and huge responsibility; I'll try my best to do it justice.

On an oppressively hot June day in 2006, Dawood Thary, then 10 years old, lost his father to an explosion. Ahmad, Dawood's father, did odd jobs to support his family—sometimes harvesting crops, other times repairing furniture. Really, he would do any kind of labor if it paid enough to feed his seven kids. But he was ok with this life until one day, his pay just wasn’t enough and his wife sold the earrings she had bought for their wedding.

That’s when Ahmad became desperate and took on some work he had refused before because he knew it was too dangerous: disassembling missiles shot by Israeli war planes that had not exploded. (According to the Landmine and Cluster Munitions Monitor, there have been 3,653 casualties reported in Palestine due to “unexploded remnants of war” since 1967, most of them in Gaza. After the last war in the summer of 2014, 17 were killed and 100 more injured in this way, including 46 children.) The resistance forces used the parts to make rockets. And sometimes, artists and others bought the empty casings to make vases and other objects. For Ahmad, it was simply a way to earn enough to buy back his wife’s earrings. It paid 50 shekels (US$14) per day.

Ahmad had carried the weight of family responsibility since he was 16 and in the 11th grade. That’s when his father died from a work injury, forcing Ahmad to leave school to support his mother, sister and two younger brothers. His other six sisters were married and his oldest brother did nothing to help. Ahmad was a history lover and a bookworm, however, and continued to read every book he could get. Before the explosion, he was planning to return to school by taking his Tawjihi exam (the test required to graduate high school) and study history in university.

Ahmad’s younger brother—an officer with the resistance forces—told him about the work available, disassembling and cleaning the unexploded Israeli weaponry. Ahmad told his wife and son about the work, insisting that despite the danger, it was worth doing for a little while to retrieve the earrings. And sure enough, he was able to do so the first day. And, 13 years later, she wears them every day; in fact, she refuses to take them off.

"[When Ahmad left home for the second day on the job], I had a feeling something would happen. My dad looked sad, like he was bidding us farewell. And I felt a lump in my throat," Dawood recalls.

Later that day, Dawood's fear became reality. The explosion was so loud it almost seemed to burst their eardrums. Dawood and his mother ran to the window to see what had happened and he recalls vividly his mother muttering, "Rah abook, ya Dawood!" (Your father is gone, Dawood.)

His mother ran to her brother-in-law’s house, where Ahmad had been working, and Dawood "stood there by the window staring at my uncle's place. It felt like time had stopped. And then, I saw him. A very pale man dressed in white. He cast me a long, sad glance, then disappeared."

Dawood could not get through the crowd of people to see what had happened or what was left of his father. All he could witness was the big, black bags in which crews had collected his father's dismembered limbs.

In the aftermath, Dawood attended a new school for orphans to help him accept the tragedy.

"Summer for me brings back the smell of burned meat, which I smelled when I ran to the site of the explosion. It never leaves my nose until winter comes and washes it away," says Dawood.

Now in his 20s, Dawood still remembers his father as a superhero. Those who knew Ahmad say the two are very much alike—in the way Dawood speaks, for instance, and in the way people come to him for advice. It’s a fact about which Dawood is very proud.

"I loved how my dad didn't treat me as a kid, but as an equal,” recalls Dawood, now practicing his chosen skill, optometry. “He would tell me to take care of my mother and oldest brother instead of the other way around. No one else ever treated me like that."

I couldn’t help but notice how Dawood kept saying "Raheel walidy" instead of "Wafat walidy" ("Dad's departure" instead of "Dad's death"). This life is a journey no matter how long or short it is. It is temporary. In the end, we all will go back to where Adam and Eve began. We lose loved ones and they return to their maker. And it will be our turn next.  I hope Dawood departs to reunite with his father in a better place after a long, happy journey.

Note: Not long after meeting Dawood, Omnia lost her own mother. She writes about her loss in this poem.