Home » The bombs have stopped, yet the pain continues

The bombs have stopped, yet the pain continues

The bombs have stopped, yet the pain continues 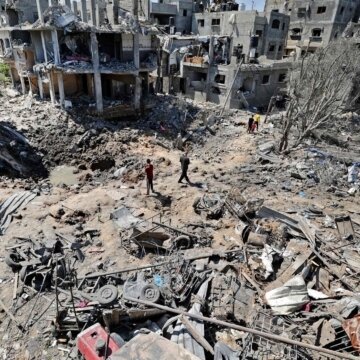 When the ceasefire between Israel and the Palestinian resistance was declared, I was sitting on my bed in my safe dorm room in Doha watching the news. My first reaction was relief: Gaza was and still is bleeding, and now I could finally sleep without worrying about my family and friends. I can sleep without having nightmares about bombs and Israeli missiles and warplanes chasing me and those I love. I can stop watching the news and get back to my routine. I had missed the last two episodes of my favorite Ramadan drama on TV. I couldn’t watch anything but the news ever since Israeli jets started to bomb Gaza. I can finally go out without feeling guilty. I had rarely left my apartment during the Israeli assault on Gaza, venturing out only when it was necessary, like to pick up food. Sometimes I just couldn’t handle it, so I’d turn off the news and go out for a walk. But even then, I would check Palestinian news groups on WhatsApp to keep updated on what was going on in my hometown.

Literally, every day during the 11-day assault I laid in bed and followed the news on TV and WhatsApp. In between reading the scrolling headlines, I checked on my family and friends–reaching out many times a day. I lived in constant fear. My head felt like it was about to explode. It may seem counterintuitive but living in danger with them is much better than living in peace without them. All I felt like doing was collecting my stuff and leaving for Gaza, despite the destruction and unemployment I knew would await me. My wish during the war was and still is for my family and I to die or survive together, so no one grieves the death of the other.

Instead, I was more than a thousand miles away from my loved ones. The peace, safety and tranquility of Qatar, where I have been attending university, felt suffocating. After all, my people were deprived of such peace due to the Israeli attacks not only on Gaza but also on Jerusalem’s Al-Aqsa Mosque, its Sheikh Jarrah neighborhood, elsewhere in the West Bank, and even on Palestinians in what is now Israel. As I channeled what I knew my family must be feeling, I imagined that the sound of airplanes was actually that of warplanes. All “bangs” startled me and made my heart feel like it was about to stop. It seems watching the news 24/7 made me feel like I was still in Gaza.

The trauma of war haunts us no matter how far we are from Gaza. I’ll never forget the moment when Mom sent me pictures of my room in our Gaza home, with its window now broken due to an Israeli air raid on my neighborhood. "It felt like an earthquake," said Mom. Thank God my family was safe, and no one had been close to the windows. When I was home, one of my favorite places to sit was the armchair where the glass fell. I can't imagine what would have happened to me if I had been relaxing there during the explosion. That heavy glass would've smashed my face. I am sure this happened to many other people, however.

Like all the people of Gaza, my family rarely slept. They spent most of the 11 days of the Israeli military assault in the hallway–away from the windows. Since we do not have shelters, people seek refuge in corridors and staircases, thinking they might be safer. But the truth is that no place is safe during war. Mom tried to reassure me whenever I called; however, sometimes she let her guard down. “The whole house shakes; even the armchair I sit on moves back and forth,” she said once. “I’ve started to think of leaving the country, dear Ali. I wish your brother and I could leave. Life here is unbearable.” She also mentioned how the neighbor’s kids cried and screamed when they heard bombs. On a positive note, she had a dream about me during the war. In the dream, I returned home to check on them, and she asked me to buy a popular Palestinian sweet called “namoura” and distribute it to neighbors, friends and relatives to celebrate my homecoming. A few days later, the war ended.

Being away during this time hurts so much because I can’t do anything for my country. Hearing Mom’s tired voice and my friends cry in voice notes paralyzed me. It sucks to feel helpless. However, I did my best to be part of the pro-Palestine social media resistance. I shared stories, posts and tweets on Instagram, Facebook and Twitter. I cheered when influential Arab and international celebrities and other public figures used their own platforms to raise awareness of the Palestinian cause. I received waves of messages of love, support and solidarity from friends all over the world, and that also consoled me.

In addition, I joined Qatar’s solidarity event in the State Grand Mosque. We sang and shouted against the illegal Israeli occupation and attacks on Jerusalem and Gaza. It warmed my heart to see people from around the world gather not only in Doha, but across the globe, holding Palestinian flags and solidarity signs while shouting “Free Palestine.” We urged them to pressure their governments to take action. We are sick of the world’s governments condemning Israeli crimes without backing it up with action. We are sick of the U.S. government, in particular, recognizing only Israel’s right to self-defense, when we are the ones under occupation and blockade. And we are sick of being dependent on sympathy and aid. We are strong and resilient. What we really want is JUSTICE.

I said I felt relief when the ceasefire was declared. I also felt pride. My people faced and endured a new war waged against us by one of the strongest armies in the world yet are now rising back to life like the phoenix. But in equal parts, I felt sad, frustrated and angry. Yes, Israelis suffered, but what they lost is nothing compared to Gaza’s devastation. According to Gaza’s health ministry, 248 Palestinians were killed, including 66 children. At least 1,910 others were wounded. More than 90,000 residents were displaced from their homes, and much of Gaza’s infrastructure was badly damaged or completely levelled.

Most main streets, especially the one leading to al-Shifa Hospital, the biggest hospital in Gaza, were bombed. Whole neighborhoods were leveled to the ground. One entire family of 21 was killed. And I will never forget the image of the young Palestinian begging his mom to stay alive while she barely breathed under the rubble of their house. I cannot forget the injured father holding his wounded infant, the only two from their family to survive. This was not a “conflict” or an “assault.” This is an ongoing GENOCIDE. In contrast, in Israel, 12 people were killed.

Meanwhile, Israel’s attacks on the al-Aqsa Mosque continue, along with the attempts of Jewish settlers to displace the residents of Sheikh Jarrah, and now Silwan. If anything, those efforts have escalated in the days since the ceasefire. It’s an endless circle. All the root causes that provoke us to resist continue to fester. It’s not enough to stop the bombs and tanks. What about the grinding poverty and slow death we suffer every day?

A third COVID-19 wave is now sweeping across the Gaza Strip due to the lack of vaccines. Only 2% of our residents are vaccinated, compared to 60% of Israelis who have received at least one shot. During Israel’s war on Gaza, an airstrike killed a prominent Palestinian doctor, Ayman Abu al-Ouf, who had been overseeing COVID care at the largest hospital. He was killed alongside 12 members of his extended family. People can’t even get tested for the virus, since the only testing laboratory was damaged. Meanwhile Gaza lacks medicine, fuel, electricity, fresh water, construction material and jobs. Residents now have electricity for just two to four hours a day, since Israeli jets bombed Gaza’s power plant and destroyed many of the networks.

Ceasefires will be meaningless until the Gaza blockade is lifted and Palestine is liberated.

I am definitely against violence, and I never wish death to anybody. We are all humans after all.  But it is also human nature to fight back against oppression. Some people think that this war was the first bombing since Israel’s aggression in 2014. But that’s wrong. Gaza is periodically bombed, but Israel usually plays it smart by hitting us sporadically, just under the radar, so it doesn’t attract too much attention.

Our world is in desperate need of humanity. It’s not about land, race, religion, etc. It’s about HUMANITY.