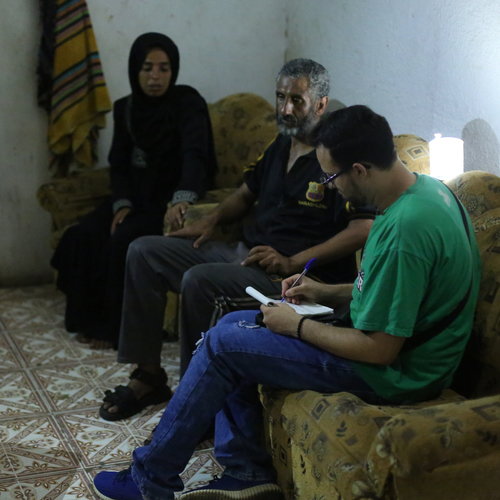 One of the many consequences of the Israeli blockade of Gaza is a lack of income. According to the World Bank, annual income per person in Gaza fell from $2,659 in 1994 to $1,826 in 2018. In large part, that devastating statistic is due to unemployment—which is the highest in the World Bank's database.

So, what does that look like on a human level? An example is Nedal Hutthut, 47, who lives with his wife, three sons and two daughters in a tiny cement house in the al-Shati Refugee Camp west of Gaza City. Like many others in the neighborhood, it is scantily furnished. For the six of them, there are two bedrooms, a living room, a small kitchen and one bathroom. An old fan, an even more ancient TV and a few armchairs are all they have for furniture. They sleep on the floor.

Nedal is unemployed and the U.N. aid they receive every three months is insufficient. “I used to sell things like groceries from a cart, but then the owner went bankrupt. I am still looking for another job, but I can’t find any. I don’t even have a single shekel for us to buy water to drink,” he says, referring to the fact that the water from their faucets is unpotable.

“I go to the market very late so I can collect food [that is discarded or has fallen] from under the sellers’ carts. I can’t find other ways to feed my kids,” he explains. When his wife prepares meals at home, the ingredients are usually donated by neighbors or relatives. Cooking is difficult even with donations, however. Cooking gas is too expensive.

Um [mother of] Muhammed, Nedal’s wife, adds, “Our neighbors sometimes help by paying for the cooking gas. We need help with everything. I just returned from my family’s house in Khan Younis and they gave me some sugar.”

Um Muhammed does not visit her family very often, since she can’t afford transportation; she usually goes only when food or other aid is needed. Their financial state isn’t that good either, but they try to help whenever possible.

The couple’s oldest son, Muhmmed, is 23 and thus could normally work and contribute an income. However, he was in a car accident when he was a child, and one of his feet was injured—requiring insertion of seven platinum rods and making it difficult for him to stand for very long.  This has made it hard for him to find paid work.

“He tries so hard to find a job. He doesn’t like burdening us,” Um Muhammed says sadly. “But his handicap is, sadly, an obstacle.” All Muhammed wants is a project such as a cart from which he can sell tea and coffee to passersby on the street.

“It hurts to see my kids jobless and uneducated,” says Nedal. “They stopped going to school because we can’t afford the expenses. They even tried to find jobs to support us, but in vain. My youngest daughter is the only one who goes to school.”

Also making it difficult for his children to learn is the lack of electricity for up to 20 hours a day, which leaves them in the dark. They can’t afford a generator to provide back-up power. Instead, however, they have received help through five solar-powered lights donated by the American nonprofit Rebuilding Alliance and distributed by Gaza’s Youth Vision NGO. The nur al-amal (light of hope) allows them to read and do chores in the evenings, when otherwise they would be plunged into darkness.

Um Muhammed says, “We are so thankful for those who bought such useful lights for us. Our home is finally full of light at night.”