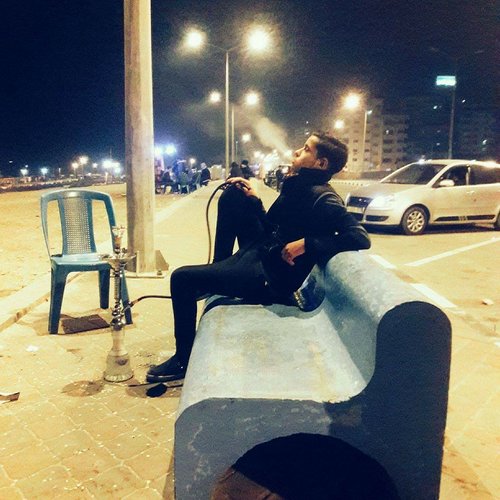 Abu Ahmed, 48, is a Gaza taxi driver who fears he will be imprisoned for being unable to pay his heavy debts.

"I wish I could give up smoking—not for my health, but because the government imposes such high taxes on tobacco," says Ahmed, who estimates he smokes two packs of cigarettes a day.  "These taxes are the reason why I'm drenched in debt."

He’s not alone. Despite a poverty rate of 80 percent in Gaza, smoking is on the rise in the Strip. The Palestinian Central Bureau of Statistics estimates the number of smokers in Gaza more than doubled from 2010 to 2015—jumping from 7.3 percent to nearly 15 percent. The smoking habit is most entrenched among men. In a survey published in 2016 in the Journal of Multidisciplinary Healthcare,  31 percent of adult men in Gaza reported smoking.

While the 2016 report cites the influence of friends as the primary reason why Gazans pick up the habit, smokers themselves cite stress as the factor that keeps them smoking despite the high cost. Many residents suffer from mental and emotional distress from past wars on the Strip, and Gaza has the highest unemployment rate in the world—about 45 percent overall and as high as 60 percent among youth. Smoking is driven by frustration, anger and boredom.

It’s a vicious circle: the addiction and the price cigarettes can command drives many young peddlers to the streets and alleyways to hawk the “poison”; one can barely navigate the roads and alleyways without stumbling over them.

“I’ve been smoking since I was 19,” shrugs Abu Ahmed, adding that the most contented moments of the day are when he has a smoke with a cup of coffee. “It’s the only way I’ve got to escape the boredom and depression of this miserable existence.” [Note that alcohol is banned in Gaza.]

Due to their high price and a general lack of purchasing power among the 2 million population, cigarettes are sold singly in Gaza. The most popular type is Egyptian cigarettes, due to their relatively good quality and affordability. Still, they cost 20 shekels (about $5.70) for a pack of 20—a price that causes many Gazans to struggle to afford. Abu Ahmed’s fear of imprisonment isn’t irrational; nearly 100,000 Gazans spent time in jail in 2017 due to unpaid debt.

Even more expensive than Egyptian cigarettes are the imported Viceroy, Parliament, Marlboro and Kent brands, ranging from 20 shekels ($5.70) to 27 ($7.70) a pack. The high charge for cigarettes is due to a tax imposed by Gaza's government on imported cigarettes—up to half the total price. In fact, the taxes have been fluctuating frequently recently—getting increasingly higher. If the cigarettes are smuggled in through a tunnel, the price is even more.

Although there are locally manufactured cigarettes—known as al-Araby tobacco—that sell for only 5 shekels ($1.50) a pack, consumption is low because of its poor quality and distasteful odor. A Palestinian brand from the West Bank, called Liberty, now is being sold in Gaza as a result of the attempted reconciliation between the two main political parties sell. The price is only 9 shekels ($2.57), but it still considered a poor choice compared to Egyptian and foreign brands.

The Gaza government began Imposing taxes on imported cigarettes during Israel’s 2014 war on Gaza. Israeli forces destroyed many of Gaza's tunnels, and most of the remainder have been targeted by the Egyptian government since then. Prior to that time, the average pack of Egyptian cigarettes cost just $1.14 dollars. However, today, the price of tobacco is never stable; it rises and falls within a day. Egyptian cigarettes have reached a high of 30 shekels ($8.57) each.

Hookahs (water pipes) also are common forms of smoking and e-cigarettes (vaping) are starting to make inroads. However, cigarettes continue to be the most easily accessible and popular.

Haneen (who asked that her full name not be used), a mother of one daughter and a son, complains about her smoker husband. Both are unemployed and his addiction to smoking forced him to sell her phone to get money. Today, he is in debt by 600 shekels ($171).

"I always beg him to quit smoking, but he says he can't. Instead of paying the fees of my daughter's kindergarten, he pays to smoke," she sighs.

Unlike in the West, there are no anti-smoking campaigns in Gaza. The government once tried prohibiting smoking in cars, but there was such a backlash that the ban didn't go into effect. The 2016 survey found that family pressure is the most effective at preventing the smoking habit—but stopping it once started is difficult.

"I sell the equivalent of at least 300 packs per a day. And sometimes, the number reaches 500, especially on weekends,” one cigarette vendor says, who owns a popular shop in Gaza and asked that his name remain withheld.  "Tobacco is like bread."

First published by The New Arab