Home » From out of the dark, light

From out of the dark, light

From out of the dark, light 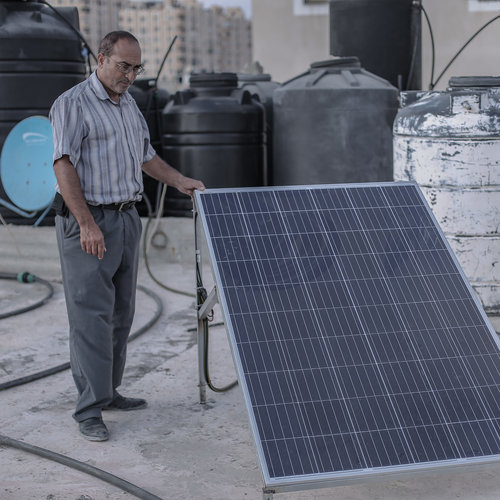 It was dark inside the house. The weather was steaming hot and since the electricity had been out for seven hours, fans were not an option. Nothing but a small, concrete box with one virtual slit for a window, it reminded me of an oven. Only the dim light from Walaa's phone screen relieved the gloom. She couldn't even turn on the built-in flashlight, only 10% charge remained, and she needed to save it to call her husband before he returned from work as a taxi driver at 2 a.m. It was just 10 p.m., and until then, she was alone.

Walaa Al-Nawajha, 23, is seven-months pregnant and feeling exhausted, aggravated by toxoplasmosis, a parasitic infection that gave her a severe headache, high temperature and a chronic cough. Yet the still heat kept her from sleeping.

The young mother lives among the narrow alleys of the al-Shati (“beach”) camp, the most densely populated refugee community in the Gaza Strip, west of Gaza City. While she tried to lay still, outside children escaped the confines of their own cement blocks to play in the streets. Entire families sat on their stoops with their neighbors, chatting until the electricity came back.

Suddenly, Walaa started coughing heavily, her heart beating fast. She tried to take a deep breath to control her coughing, but to no avail. She called her husband, but the battery shut down. She tried to yell for help, but the children’s shouts were too loud. It felt as if she was on an isolated island, floating in the middle of her city. Death seemed close, and she feared for the unborn baby within.

Walaa’s cough slowly petered out and she fell into a deep sleep. She recalls: "What a surreal night it was. I literally felt it was my time, that I’d die a silent death. I was so drenched in sweat my pillow was wet. It was like I was so hot I was about to explode.”

Wala'a’s biggest challenge in coping with her condition and life in general is the frequent electricity outages. She never uses LED lights, since fires have erupted when the battery explodes. Thus, when the electricity shuts off due to lack of fuel, she spends most of the time in the dark, using only her phone's flashlight. When guests visit, she sometimes lights a candle, although that’s a fire hazard as well. She is careful to place it in the middle of the floor, away from flammable curtains and furniture. "My phone is my life. When it's off, life is off," she explains.

Walaa even relies on her phone to help her 6-year-old son Hassan do his homework, as well as to light his way to the bathroom at night. One night, Hassan went to the bathroom alone, holding his mother's phone as a flashlight while she slept. Suddenly, while he was taking a shower, the phone rang—automatically shutting off the light. He screamed, crying, "Mom! Mom! Come here! I beg you, hurry up!" Walaa woke up terrified.

Fortunately, recently Walaa recently received what she considers a “miracle”: a SunBox system.  The SunBox solar-powered panels and devices were developed by a Gazan engineer, Majd Mashharawi, 25. It enables Walaa to charge the family’s phones and laptops, turn on the TV, access the internet and—most importantly—keep the lights on.

This solar power system is desperately needed in Gaza, but although Majd’s company keeps the cost low, many people still can't afford it without the help of American NGO Rebuilding Alliance. Its charitable program, "It's Time for Light," provides impoverished families like hers with the solar-powered lanterns and panels at no charge. To date, 10 needy families have received solar-panel units.  Lamps have been given to 35,600 others, and 20,000 more were scheduled for distribution this summer.

After the SunBox panels were installed, says Walaa, she no longer suffers during the electricity blackouts. In the summer, she can use the fan at any time and her son can do his homework. Her phone remains charged, so she can make emergency phone calls. Even some of her neighbors visit her to watch TV or give her their phones to charge.

"The solar panels are the most precious gift,” she says. Now, my nights are not so dark and not. And most of all, they are safe."