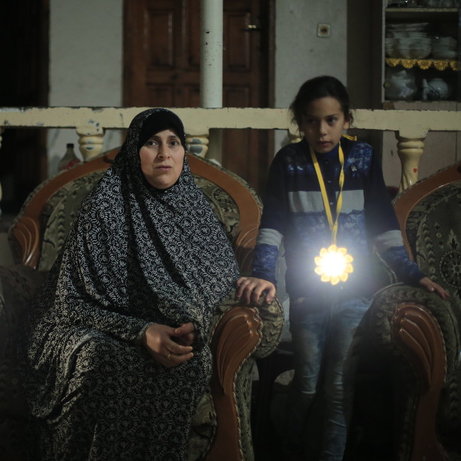 When life is drenched in poverty, the tiniest detail is a challenge. Um [mother of] Mohammed Moqdad, is a case in point.

It was 7 p.m. when I arrived at her home, accompanied by a group from We Are Not Numbers and our partner NGO, Rebuilding Alliance. Um Mohammed, a mother of six daughters and one living son, lives in the Al-Shati (“Beach”) Camp, one of the most densely populated refugee communities in the Gaza Strip, located west of Gaza City. The camp is well known for its puzzling, meandering alleys, with tiny, concrete-box homes seemingly randomly packed on each other.

After finding our way through the dark silence that hung over the narrow streets, we stepped through the rusty door as it creaked open. Inside, there was no furniture, only two couches and a table in the middle. The floor was cracked and the ceiling consisted of mere sheets of asbestos with holes that allowed rain to infiltrate, leaving the walls wet and mossy-seeming.

The room was curtained off into sections, as if to imitate rooms. There was only one, small window through which water seeped, staining the wallpaper that tried to cover the concrete. I’d never seen such poverty; I felt as if I was on an island floating in the middle of my city.

I gazed at the pictures two children on the wall.

Um Mohammed’s eldest son, Mohammed, was killed during the 2008 Israeli war on Gaza.  The 17-year-old had left the house to visit his cousin in Tel al–Hawa, a neighborhood in western Gaza City. He was killed while trying to extinguish a shell containing deadly white phosphorous dropped by Israeli warplanes. The boy didn’t know that such shells become more flammable when doused with water.

Her second son, Baraa’, died in the 2014 Israeli conflict when he was only 6 years old. He had left the house during a ceasefire on July 28; he had wanted to play with his friends on the first day Eid al–Fitr, a Muslim holiday that marks the end of the Islamic holy month of Ramadan. Baraa’ ran to a nearby playground, where he was killed along with 13 other kids. Some ceasefire.

‘’I sometimes panic when my third son spends too many hours away from me,” admits Um Mohammed. “I am so afraid I will lose my only remaining son.’’

Mahmoud, 21, left school when he was 18 because the family can’t afford to pay the fees. The young man also suffers from impaired hearing, but they can’t afford medical treatment.

The lack of funds for medical care is particularly tragic for Um Mohammed’s 2-year-old granddaughter, who was born with cerebral atrophy. The little girl could be helped with surgery, but Israel has not allowed the family out of Gaza so she can receive it.

Um Mohammed and her family depend mainly on humanitarian aid from the UN refugee agency (UNRWA) and the government of Qatar. Um Mohammed’s husband, Akram Moqdad, worked in construction inside Israel prior to the second intifada (uprising) in 2000. However, he has been jobless ever since.

One of the family’s biggest challenges is the frequent electricity outages caused by fuel shortages. When the power goes out at night, the family descends into utter darkness, dependent on their phones’ flashlights.

‘’We can’t even afford to buy a candle, much less LED lights,’’ Um Mohammed explained. ‘’Our life gets worse day after day. We spend all of our time trying to secure our basic needs, such as food and medical treatment.”

‘’My son uses these lights when he goes to the market after the sun goes down. And they help my daughters do their homework,” said Um Mohammed. “This reminds me there still are good people in this world who care about humans.’’