Home » Making do with second-hand (Israeli!) clothes for Eid

Making do with second-hand (Israeli!) clothes for Eid

Making do with second-hand (Israeli!) clothes for Eid 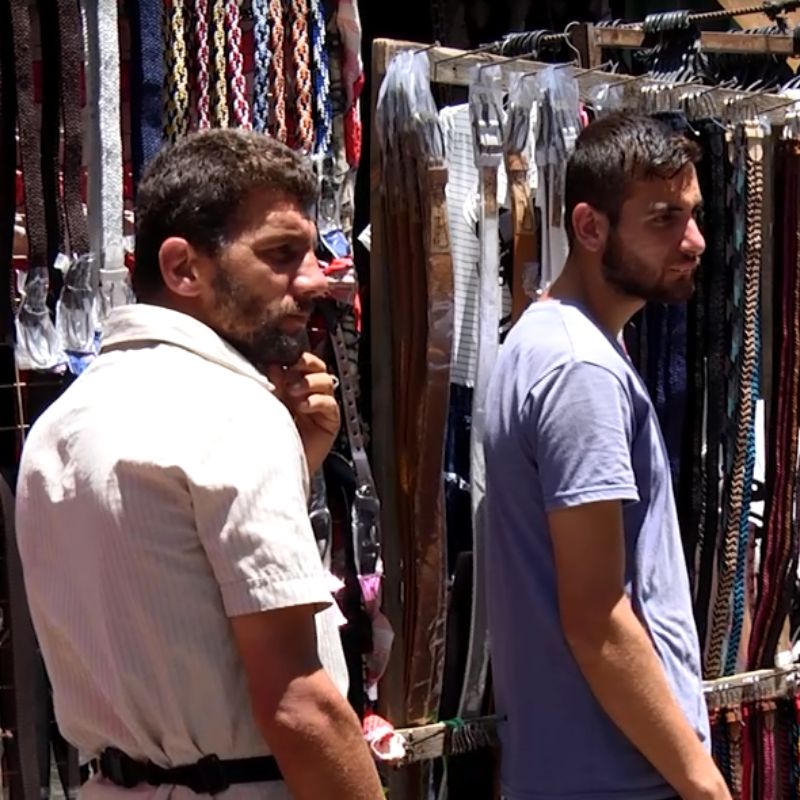 You know it’s hard times in Gaza when the best families can do as they shop for holiday clothes is to buy secondhand Israeli goods. And that is the situation this year as the 2 million residents prepare for Eid al-Fitr, the holiday that marks the end of Ramadan, the Islamic month of fasting.

Unemployment has soared to 44 percent overall and 60 percent among youth in the wake of the Palestinian Authority’s salary restrictions and U.S. cuts in aid to UNRWA, the UN refugee agency. About half of the population lives in extreme poverty.

During the Eid holiday, a typically joyful time like the Christian Christmas and Jewish Hanukkah, parents buy new clothes for children, women buy cakes and cookies, and families visit their relatives with gifts. When you have no money however, it’s difficult to honor the traditions.

One recent day, I encountered Mohammed Abu Safi, 18, and his mother in Gaza’s Omer Mukhtar market, looking for inexpensive clothes. It was two days before Eid. He said he knew his mom would not be able to afford to buy what he really wanted, but he still hoped to find something decent.

“Two weeks ago, I came to this market to buy clothes for Eid, but everything was too expensive,” he explained. “So, I asked Mom to come just before the holiday, in the hope that the salesmen would sell their goods at cheaper prices.”

Unfortunately, he didn’t find anything that day. One shirt alone cost 60 shekels (about US$18) and a pair of pants costs the same or a bit more. Good shoes cost even more—120 shekels (US$35), so the total cost of an outfit would be about $70, which most Gazans can’t easily afford.

Maher Tabba`, an economic analyst in Gaza, says that more than 255,000 residents are jobless, many of whom are university graduates.

“The level of food insecurity has risen to more than 72 percent,” he adds.

Ahmed Baraka, a clothing merchant in the same market, sat in a chair, looking bored and furious. His shop, stocked with shirts and trousers, was empty of customers.

“What do you want me to say? These goods are borrowed from another merchant, and I will sell them at lower prices so I can pay him back, which means I will be broke,” he said.

Baraka and other merchants are very pessimistic this Eid.

“Today I didn’t sell what I expected to sell. Eid is the day after tomorrow; in previous years, my shop was never empty during this time of year,” Baraka added.

Othman Abu Rokba, 45 and a father of seven, said he came to the market with his kids only to look at the clothes in the stores, a tradition for him. He creates the feeling for his kids that they are shopping for new clothes, then “sneaks” to another market for second-hand clothes.

“My kids need new clothes but I can’t afford them, since I’ve been jobless since 2007,” Abu Rokba said. “At the same time, I don’t want them to feel different from other kids who have new Eid clothes. So, I take them to Firas Market, which sells used Israeli-imported clothes.”

Firas Market, located in central Gaza City, is full of shops with second-hand clothes imported from Israel. They are cheap and a lot of them are international brands. How does he feel about buying clothes supplied by his occupier?

“For 50 shekels (US$15), I can buy clothes for my seven children, which is way more affordable than buying new ones,” he shrugged.