Razan: a superhero story from Gaza

Razan: a superhero story from Gaza 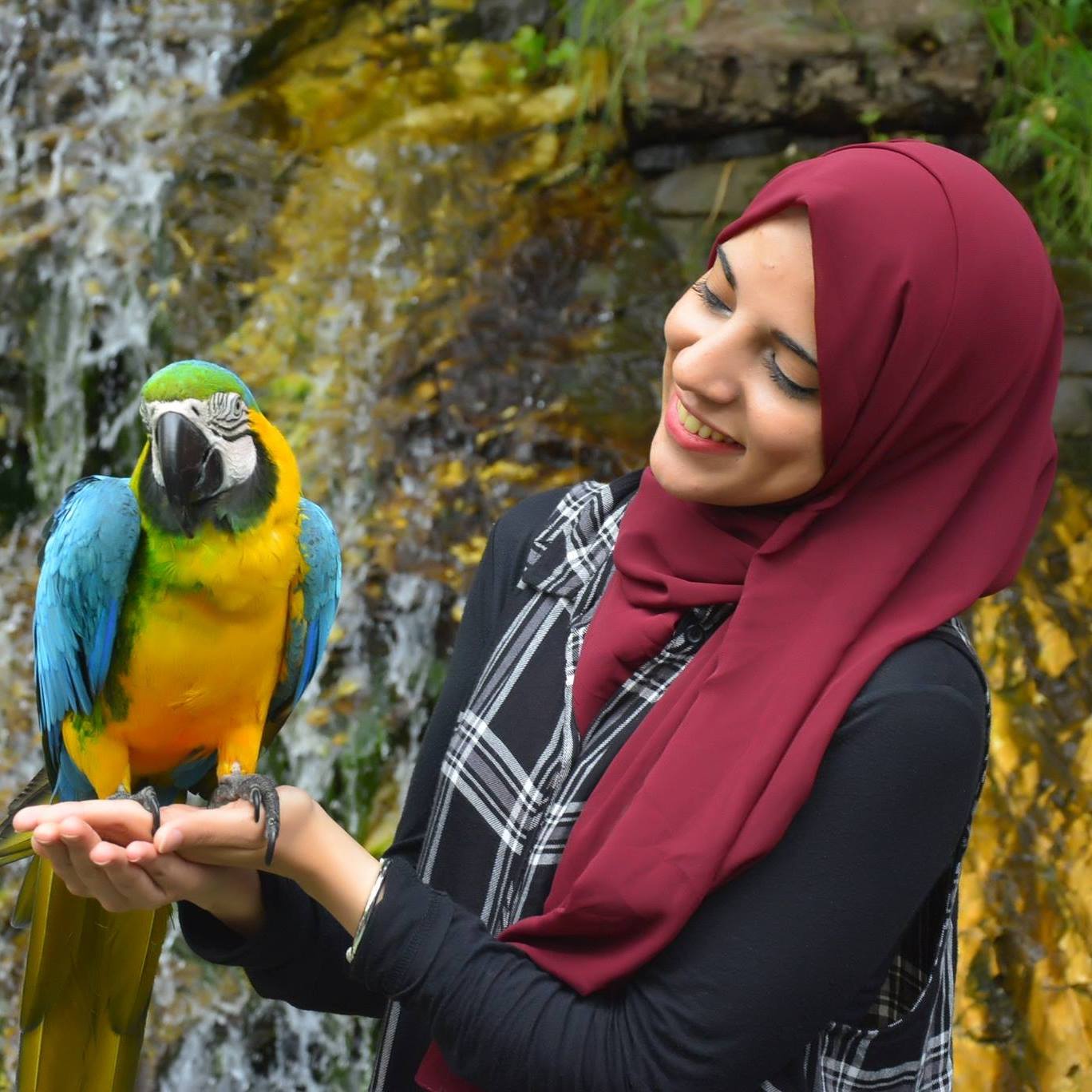 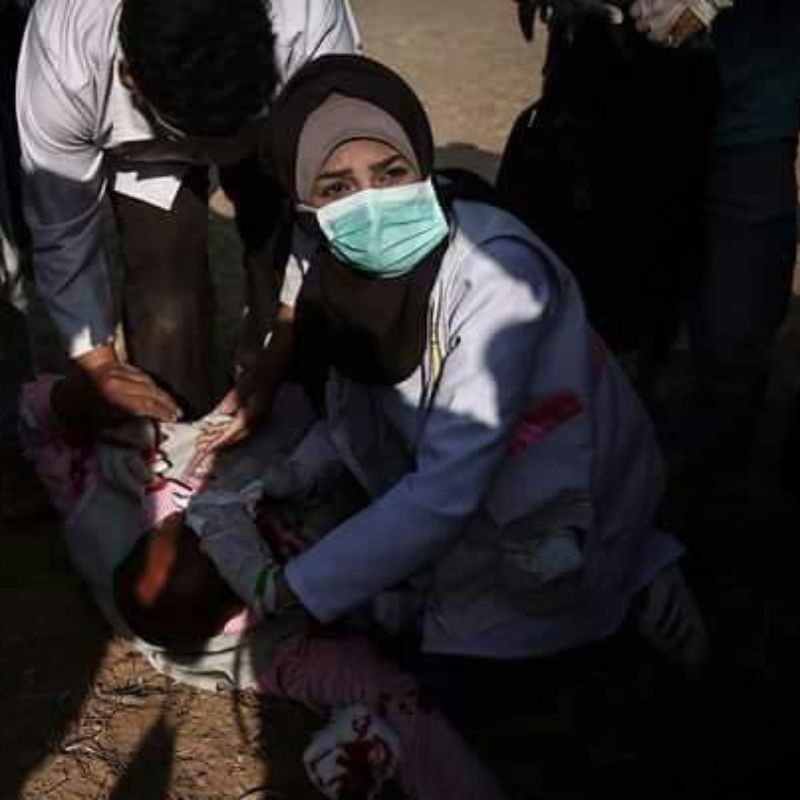 “Is she your cousin? You look the same.”

“Your cousin is a hero! You must be proud!”

These are some of the messages people sent me, along with photos and posts, about Razan, one of the few female volunteer medics working in Gaza's border protests, the Great Return March.

I did not remember her. I told the people messaging me that probably the smile looked familiar and I share blood with almost everyone in the Alnajjar neighborhood in Khuzaa, near the southeastern border of Gaza. It's a neighborhood that has been a locus for suffering and misery, a neighborhood that the 2014 Israeli aggression on Gaza almost wiped out–including many places where I played as a child.

I remember that everyone in my neighborhood was always so hospitable, offering the sweetest tea ever. I was never  able to drink the tea because it was so sweet, even though my grandmother gave me a series of threatening looks. (It’s rude not to drink!) I attended many weddings there as a kid. I used to see Razan there, all dressed up. I have always loved her hair.

But I did not recognize her in the photos I was sent. I only knew her as a child. In my late teenage years and after the second Israeli aggression on Gaza, I focused on books and school. I stopped going out. I stopped going to social events. I was scared of getting attached to people, of losing people. I stayed alone in my bubble for years.

I did not remember her, so I texted my mum, asking about her. “She is Aunty Sabren’s daughter,” she responded. Her words unlocked a part of my memory and a movie from my childhood fast-forwarded in front of my eyes. I remembered her.

I remember when my grandmother called to tell me, “Come down! Reaan and Razan are here!” Sarah, my sister, and I would go downstairs and invite them to play with our toys. I was a few years older than they were, so at one point I stopped playing and just gave them the toys and watched while reading.

I have always loved Razan's hair braids and her sense of fashion. She was one of the cutest girls I knew back then. She always smelled nice, a sweet, flowery scent I can smell even now in the back of my memory.

I remember her now and I am so proud of how courageous she grew to be. How fearless. How kind. I am proud she was a role model for many, breaking all of the stereotypes about women.

I was invited for iftar (the meal that breaks the fast during the holy month of Ramadan) one hour after I received the news about Razan's murder. I decided not to tell anyone there because the guests had been fasting and I did not want to share it before they ate. I remained calm on the surface while a war raged inside of me. Every piece of my heart felt like an island with a volcano erupting nonstop. Tears welled up in my eyes, but just like the Israeli occupation forces on the border of Gaza, I oppressed them. I did not allow any tear to express its anger, its pain, its legitimate right of existence. Any tear that tried to sneak out was executed by my hand.

But I could not eat. I ate a bit and moved my food around before I broke down. Because as with all types of oppression, eventually, rightful things take place. You cannot oppress justice forever.

I spoke to my family and  went for a run to clear my mind, allowing myself to truly understand what had happened. Then I went to social media to see what her colleagues and the people who were around Razan were saying about her, to read her last words, to see her mother mourning her daughter. It was very traumatic. I have not seen my family or any of these people in two years, since leaving to pursue my graduate studies in Turkey. And now I was seeing them on social media in pain.

Razan had volunteered as a medic since the beginning of the Great Return March, a peaceful demonstration demanding the end of the siege imposed on Gaza and the end of the occupation. The Israeli occupation force used lethal force against it, firing live, bone-breaking bullets on the protesters and killing 120 to date–including journalists, women, children and people with special needs. More than 13,000 have been injured.

Razan fearlessly ran toward the sound of bullets, trying to save who could be saved. Razan’s colleagues described the scene in a video: “I told her to come back, that she was going too far. They will shoot us!” But she didn’t listen and replied that there was an injured guy who needed help. Her friend pulled her hand to walk away, but then Razan pointed at her back. It was bleeding. She had been shot in the back!

She died while saving people’s lives. She died so everyone could demand justice. It’s time to hold the occupation force accountable. Learn more and write to your representatives in government. I suggest you start by checking out the BDS movement and the proposal for one democratic state.

It's not just sad; it's a war crime

Please do something. Your prayers and thoughts are kind and appreciated, but they will not help me move on. If this continues, I will lose more loved ones. Razan is only one out of hundreds of sad stories.

ARTICLE 20. — Persons regularly and solely engaged in the operation and administration of civilian hospitals, including the personnel engaged in the search for, removal and transporting of and caring for wounded and sick civilians, the infirm and maternity cases, shall be respected and protected.

Take action because you can make a difference. Every time you buy something, you are casting a vote. Every time you stay silent in the face of injustice, you are a partner in the crime. Let us honor Razan’s death by holding the occupation forces and leaders accountable for their war crimes.