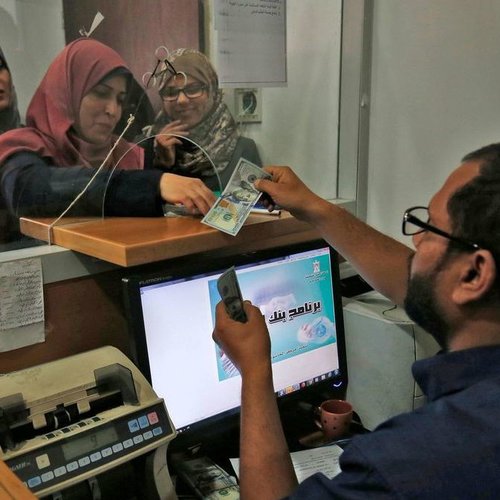 One recent morning, Mohsen Khoweisheq was one of hundreds of desperately low-income Palestinians queuing outside Gaza City’s central post office, waiting to receive a $100 bill from the Qatari government.

"I don't know how I’d survive my upcoming days if I didn't receive this money," says the 34-year-old father. "Great thanks to Qatar for the money. These hundred dollars has brought me some peace of mind."

Khoweisheq and the others in line were like drowning men grasping at anything to keep them afloat, even if just until the next crisis. With the 12-year Israeli blockade resulting in an unemployment rate of 52 percent and more than 80 percent of Gaza families receiving aid, Qatari aid has become a lifeline for residents of the territory, in a myriad of ways both large and small. In addition to the $100 grants to 60,000 of the poorest families (which it has repeated several times), the Qatari government’s largesse has ranged from paying the salaries of employees of Gaza’s government (a $90 million pledge that was recently suspended), to importing fuel to operate the sole power plant, to building the first comprehensive rehab center.

Meanwhile, the Gulf state has begun to usurp some of the traditional role of Egypt as a reliable broker between the Israeli government and Gaza’s dominant Hamas political party. Since October 2018, Qatar has repeatedly intervened to help broker ceasefire agreements, with the latest one following May’s deadly escalation between the two sides.

Qatar first began funding Gaza in 2012, in conjunction with the rise to power of Sheikh Tamim bin Hamad Al Thani. He instituted a Gaza Reconstruction Committee, which since then has disbursed more than $1 billion, including $50 million to UNRWA, the UN agency charged with supporting Palestinian refugees, to allow it to continue operating in Gaza in the wake of the U.S. withdrawal of funding.

The largest influx of Qatari largesse has come since October, accompanied by sensational publicity due to the suitcases of cash carried into Gaza by envoy Mohamed al-Emadi, with the permission but under the watchful eye of Israeli officials. Among the more recent projects is a planned installation of a new power line from Israel, a project for which a technical team from Qatar visited in June. There also is talk of a “controlled industrial zone” funded by Qatar, to be constructed by the now-closed Karni commercial crossing, which would hopefully employ up to 5,000 workers.

Other Arab nations have barely maintained lip-service support of the Palestinian cause as they draw closer to Israel in their common antipathy for Iran. In contrast, Qatar—which has so far successfully resisted a trade boycott led by Saudi Arabia, the UAE and Egypt—is differentiating itself by cementing its position as the Palestinians’ most stable and largest protector and negotiator. That’s a popular position on the Arab street.

Yet at the same time, Qatar is managing to play the Western game enough to stay in the good graces of the United States and Israel. For example, the Israeli government closely monitors the beneficiary list for the Qatari cash grants to families, insisting that recipients must not be affiliated with any armed faction or participate in the Great Return march protests.

Despite Qatar’s cooperation with Israeli officials, no one else is aiding the beleaguered strip to anywhere near the same degree, and Hamas recognizes the importance of the Qatari funds in easing the desperation of its citizens. Hamas leader Yahya al-Sinwar praised Qatar in a recent meeting with Palestinian factions and community figures, saying it “plays a key role in word and deed in the efforts to break the siege on the Gaza Strip and alleviate the suffering of the Palestinian people. Its large and continuing support shows how genuine Qatar’s government, people and leadership are.”

The general Gaza population agrees. In a December opinion poll by the Palestinian Center for Policy and Survey Research, 73 percent of Palestinians in the West Bank and Gaza said they feel positive about the role played by Qatar in Palestinian affairs, particularly in the strip. However, while most West Bank residents see Qatar favorably, their government—the Fatah-led Palestinian Authority (PA)—and its supporters are unhappy with Qatar’s support of Gaza, which neutralizes its attempts to force Hamas from power by imposing penalties on the population.

Yahya Qaoud, an activist and political researcher with the Palestinian Center for Policy Research and Strategic Studies Masarat, voiced a common complaint among the party faithful: "The issue of financial support for Gaza should be controlled by the legitimate government, which is the PA,” he insists. “In the midst of the profound division [between the two political parties], funding Hamas without going through the PA makes the aid political, not just humanitarian.”

However, PA president Mahmoud Abbas has more recently cautioned his people against harsh public criticism of Qatar, since his administration also is receiving the government’s aid—with a pledge of $300 million in loans and grants announced in May.

Qatar's decision to shift some funds to the PA—and withhold any further funding of salaries for Hamas employees—came after Abbas' plea for a financial safety net at the recent Arab League Summit. The Palestinian Authority is suffering a severe funding shortfall due to the U.S. halt of aid and Israel’s refusal to release the customs taxes it collects for the Abbas government, which the latter uses to pay stipends to families of Palestinian prisoners.

"The other Arab regimes didn’t pledge a cent, and it's obvious that Qatar's sudden decision to provide financial support to the PA was directed by the U.S. administration, with Israel’s permission, to protect it from collapsing,” Qaoud observes cynically. “Israel doesn't want that; it wants to keep the internal Palestinian situation stable, with a lasting division between the two main political factions.”

A carrot-and-stick strategy with Hamas

While there is no doubt that Qatar is a significant financial supporter for Hamas via its aid for Gaza, Hamas clearly isn’t getting all that it wants. In fact, Qatar is adopting a carrot-and-stick approach with the party, seeking to force it to come to less-than-desirable terms with Israel. A video that went viral on social media shows a Qatari delegation led by al-Emadi, who chatted with senior Hamas official Khalil al-Hayya and insisted, "We want calm. We want calm." Al-Hayya stuttered when responding: "Ah, okay, okay. God be with you. [Goodbye]" The video attracted an avalanche of comments from Palestinians, who expressed outrage at the apparent “price” demanded in return for Qatari aid.

At a conference convened in Gaza by al-Emadi just a few days after the last round of clashes between Israel and Hamas ended, he warned, "If the latest round of fighting had continued for a few more hours, the world would have witnessed a humanitarian catastrophe with thousands of homeless, thousands of devastated homes and thousands of killed civilians.”

Qatar’s massive cash is not enough

The Gaza Strip suffers from the world's highest rate of unemployment and poverty. According to the World Bank the economy is in “free fall” with a negative GDP and “aid flows no longer enough to stimulate growth.”

Qatari money hasn’t reduced the decline, primarily because it isn’t able to create enough permanent jobs that pay living wages. Qatar's cash-for-work program, launched in November 2018, involved only 10,000 people, when the Palestinian Central Bureau of Statistics estimates there were at least 255,000 people actively seeking work in Gaza in 2018. This means the number of people enrolled in Qatar's program is only 3.38 percent of Gaza’s jobless population.

"To really address the humanitarian crisis, we need to find solutions, not just temporary relief,” says Qaoud. “A hundred dollars for poor families are barely enough to tide them over for one or two days. What we need are work projects that employ hundreds of thousands of people with sustainable jobs.”

Even the $100 “grants” were cut back at the last minute—from 60,000 families to 40,000. Jihad Masoud, 47, is among those who didn't receive the expected payment. Masoud's family, including four sons and six daughters, lives in the al-Shati refugee camp in Gaza City. No one in the family has a job and they depend on humanitarian aid. Jihad, who received the Qatari grants twice, said he had been waiting desperately to receive a third payment to get rid of his debts.

"I went to Gaza’s central postal bank in the early morning, but I was told I was no longer on the list,” he recalls. “No reason was given. I found myself shouting at the employees while I burst with anger. I'm no longer able to keep living in this desperate city. No jobs, no stability, no hope.”

This report also was published by Mondoweiss.