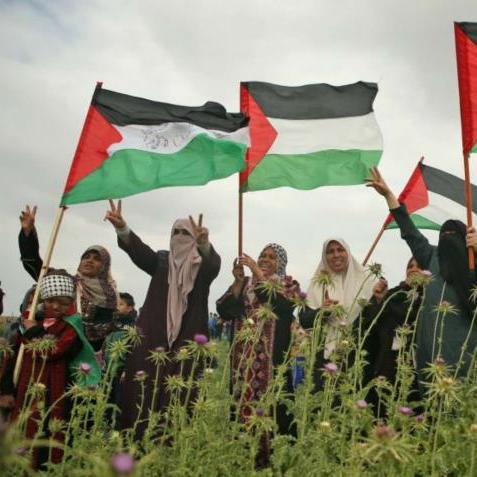 “[Palestinians] are unlucky because they fell under the feet of elephants…” –former U.S. Secretary of State John Foster Dulles, 1956

Amna, 88, is one of an estimated 750,000 Palestinians expelled from their homes by Zionist forces during the 1948 Arab-Israeli war—an event known as the Nakba (catastrophe). At the time, Amna [who asked that her last name not be used] was 18 and living in al-Majdal (later renamed Ashkelon by the Israelis).

"Nobody else can understand how much I wept over my lost land,” she sighs heavily. “When I remember it, life turns dark and it feels hard to breathe. But that dim light of hope I have in my heart, which tells me one day we will return to our beloved land, cannot be extinguished."

In his famous quote above, Dulles reportedly went on to repeat an observation often attributed to the first Israeli President, David Ben-Gurion: “The old generation will die and the young will forget.” But Amna and her descendants prove him wrong.

Today, more than 5 million Palestinians—the originally displaced and their descendants—live as refugees. An estimated 2.2 million are registered in Jordan, 1.3 million in the Gaza Strip, 810,000 in the West Bank, 550,000 in Syria (although about 120,000 of those now have fled to other countries) and 450,000 in Lebanon. They never have been allowed to return to their homeland, and the conditions in which they must live degrading for all but the most fortunate. For them, the Nakba has never ended.

At the time of the Nakba, Amna lived with her husband Hassan, who owned a well-known market. He was at work when Israeli militia members surrounded their city.

“Everyone started to flee, but I was alone in my house, trying to protect my 11-month-old son Adnan,” Amna recalled. “The militias started to shoot into the neighborhood in a way that seemed random, while they dropped bombs from the air. Then the ceiling of my house fell on me and my infant.’’

Later, Amna and her son were found beneath the rubble; miraculously, both survived. However, Amna suffered extensive burns and she lost sight in one eye.

The three ended up in Gaza’s al-Shati Refugee Camp, where they were provided a small house by the UN refugee agency, UNRWA. But they assumed they would eventually return home.

‘’How can we forget what happened to us?” asks Amna. “We had a peaceful life in our city. Christians and Jews would come to our parties. There was no grievance between us. We went from living in a wonderful house that stood like a castle surrounded by a grape farm, to living into a tiny shack that was more like a tent. I will never stop asking for my right of return.’’

Two decades after the Nakba, Palestinians suffered another catastrophe, known as the Naksa (setback). In 1967, Israel launched its Six-Day War against Egypt, Jordan and Syria—once again altering the map of historic Palestine. It occupied the Gaza Strip and West Bank, including Jerusalem, and expanded into the Golan Heights and Sinai Peninsula.

Three years before the war broke out, Adnan was 24 and had completed his training as an architect. However, he was unable to find work, so he traveled to Saudi Arabia, seeking for a job.

“We realized how important it was to educate our children. Before the Nakba, we earned our living from our harvest. But after losing our land and becoming refugees, education of the next generation became our focus,‘’ Amna explains.

Their dreams were dashed, however; Adnan was killed in traffic accident on his first day in Saudi Arabia.

That same year, Amna gave birth to a daughter, Sanaa’—who went on to become a secretary to the Palestinian minister of social affairs—and a son, Ahmed, who manages a government school in Gaza.

At that time, more than 8,000 Israeli settlers colonized Gaza, accompanied by troops to guard them—and terrorize the Palestinian residents.

“I grew up knowing only the atrocities of the Israeli occupation,” says Sanaa’, now 54 and a mother of four. “I listened to my parents’ painful tales of displacement and their peaceful memories from before the Nakba. And with my own eyes, I saw Israeli forces raid homes at night with their dogs and jeeps, arresting and killing people and imposing curfews on our camp as collective punishment. Still, I managed to find love with my husband and have a family I treasure.’’

The frustration of Sanaa’s generation exploded in two Intifadas. The first ignited in 1987 and was brought to an end six years later by the Oslo Accords. The early optimism created by that agreement soon disintegrated, as Palestinians saw they had been duped. In 2000, the second of the intifadas was triggered by Israeli Prime Minister Ariel Sharon's ostentatious visit to the al-Aqsa Mosque, flanked by Israeli troops.

‘’Just as my mother never stops telling me about our origins and our right of return, I pass the same stories to my children,’’ says Sanaa’. “We are not forgetting.”

Those born in the 1990s, the era of the failed Oslo Accords, are educated but bursting with rage and frustration. Their lack of hope for an end to the Israeli (and now Egyptian) blockade is aggravated by a corrupt Palestinian leadership that lacks any ability to unify. They witnessed a bloody civil war in 2007, which their two main political factions (Hamas and Fatah) struggled to destroy each other, along with three major Israeli assaults and an 11-year Israeli blockade.  Among the most disastrous consequences is an unemployment rate of more than 44 percent overall and 66 percent among youth.

Young, educated Palestinians in Gaza see no way to fulfill their ambition to travel to study, much less see the world. They can’t even meet their compatriots in the West Bank or visit the holy sites in Jerusalem. They see it just in photographs.

One of Sanaa’s daughters, Hadeel, was born in 1998. She is studying English education and swimming is her passion. She won a local swimming contest and dreams of participating in an international competition.

“A baby’s earliest memories should be of toys and playgrounds,” she says. “For me, my first memory is of scenes of the intifada on TV. Although I’ve never seen an Israeli soldier with my own eyes [Israel evacuated its settlers from Gaza in 2005], I constantly feel their existence.”

She first learned of her status as a refugee, she recalls, when she was 6 years old and attended an UNRWA school. The administrators asked her for documents that proved she was a refugee. When Hadeel returned home, she asked her mother and grandmother what that meant. And thus, she learned the story of the catastrophe.

A decade passed since the end of the last intifada in 2005. No significant civil uprising occurred, and it seemed that apathy and defeat had won. Then, in 2015, unrest broke out in the West Bank among young Palestinians defending their right to visit their holy sites in Jerusalem, with scenes echoing the previous intifadas. They lasted nine months and erupted again in July 2017, when the Israeli government installed cameras, iron gates and metal detectors at the al-Aqsa Mosque in an attempt to intimidate the Palestinians.

U.S. President Trump’s recognition of Jerusalem as Israel’s capital, followed by a cut in funding for UNRWA, the UN agency that provides 6 million Palestinian refugees with a wide range of humanitarian services, added fuel to the fire. The consequence: the “Great Return March’’ along Gaza’s border with Israel, which launched March 30 to remind the world of Palestinian’s right to go back to their homeland. And every member of Amna’s extended family is participating.

With this march, which still is ongoing, the new Palestinian generation is sending a loud message to Israel that ‘’the young won’t forget.’’