Home » Our souls are in our motors 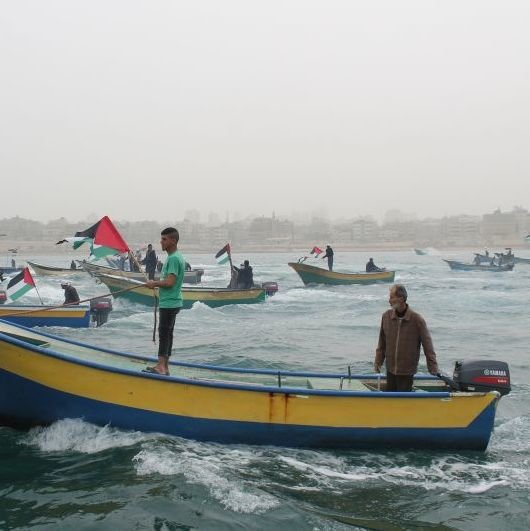 I was scheduled to meet Mussad Bakr in the afternoon. The day before, I had called Mussad and from his voice, I could tell that he is an older man, yet in my imagination I pictured him as a healthy one. Thus, I was shocked by the reality. I waited for him next to a big, red boat in the Gaza harbor. Then he appeared: a skeletal-looking man in his mid-50s, so thin his back is almost curved and his hair is colored like the ash that fell from the cigarette he nursed. We sat down by the boat with some young fishermen joining us on a stone bench. I only asked one question, “What is your story, Mussad?” His answer flowed without stopping until he was done. These are his words.

I began fishing 27 years ago, to be exact. I chose to fish because I love it; it has always been and always will be my hobby. But, I never really thought of its consequences as a profession.

Venturing into the sea is not as safe, fun or fruitful as it was in the past. Previously, the sea was more available to us [fishermen] than today. We were considered the “kings” of Gaza. We were kings because we had the ability to sail from the Gazan seacoast to the Egyptian and stay in the sea for as long as we wish. Whenever we needed money, we could simply go to the sea and fish as much as want. Then, we sell or eat what we fished. Fishing was a choice. Now, it is an unavailable must!

Fifteen years ago, when Abu Ammar (Yasser Arafat) was in charge of the Palestinian Authority, the Egyptian part of the sea was open to us. The number of fish we caught doubled. We’d ask, “Where should we fish today? Tomorrow?”

Then, the Israeli soldier Gilad Shalit was captured by Palestinian forces in 2006. (In 2006, an armed squad of Hamas resistance fighters crossed the border into the occupied territories via an underground tunnel. They blew open a tank's rear doors, killing two of the soldiers and wounding another; a fourth soldier, Gilad Shalit, was captured. He was kept in captivity until a 2011 prisoner exchange.) After that, the inner rage of Zionism erupted in a torrent of revenge against us all. All 2 million of us still suffer the consequences. Today, we can’t even afford to feed our own children.

Zionists prevent our boats from venturing out more than three to nine nautical miles. We used to be able to sail out 200 to 500 miles. We travelled to Damietta and Port Said along the coast of Egypt and stayed there for as long as we could fish.

The sea is my home. It breaks my heart that I can’t visit as much of it as I used to. I can’t float on it, peacefully enjoying the stars and the night sky, without fearing an assault. In the past, if I caught a huge amount of fish, I would stay at home for days in between, resting. Today, I can barely fish enough and sometimes it’s much less than enough. The fish we used to catch, we now only see it on TV!

(The 2012 Israeli war on Gaza, the so-called Operation Pillar of Defense, lasted eight days. On the 21st of November, 2012, a truce was reached.)

After being closed to us for eight days, the sea was opened again, but only for six miles. This is our country, and this is our sea. No limits should be forced on us.

One day after the end of the war, on the 17th of December, 2012, I exceeded those limits by around 20 to 30 meters. It was 8:30 a.m. And then, I heard it: a sound like the buzz of a wasp. It was so loud and so close; I felt as if I was deaf. Two wasps (unmanned aerial vehicles; aka drones) were just above my head, buzzing and shooting fire. Voices shouted; they wanted me to stop. I knew what they wanted. They wanted to take me to (the Israeli city of) Ashdod and ruin my boat. At that moment, it felt like death would be heaven. They kept buzzing above my head for half an hour. Just then, a bullet pierced the joint of my left hip. I felt paralyzed. I passed out.

I woke up to find myself in Barzilai Medical Center in Ashkelon. I was in the land of the occupier! They took the bullet out and dropped me off at the Erez Crossing back into Gaza. But I couldn’t feel or move my leg. The Israelis gave me a pill and said it would help ease the pain and stiffness. It did, but I was barely able to reach my home in Gaza. After the pill’s effect was gone, the pain came back even more. I never thought I would be able to use my leg again. I also lost the GPS from my boat and my motor. Oh, my motor! I haven’t had one since that day.

This and every fisherman’s tale reflects the story of Mohammed Bakr. This young fisherman represented all of us. He accidentally exceeded the sailing limit and the Israelis began shooting at him. He hugged the motor of his boat to protect it from the bullets. But, unfortunately, his attempts were in vain. He and his motor are gone now.

This is our life. Our souls are in our boats, in our motors; without them, we’re dead.

We are old enough to endure such circumstances. But the kids, what’s their fault? How are they going to cope? I swear to you, I feel so ashamed when my youngest comes to me asking for a shekel and I have nothing to give him. I curse myself and the day my mother gave birth to me. I even let my oldest son drop out of school because I can’t afford his school costs. Now that he has joined me in going to sea, I don’t fear for myself, I fear for him.

We fishermen don’t belong to any political party. We don’t carry weapons. We just fish. What’s the crime in that?

You know, the sea to us is like the bank; some withdraw money from the bank and we take it from the sea. We don't want anybody's help; we just want to fish in peace.

You can help the Mussad's family by supporting the Solidarity with Gaza Fishers campaign, a project of the Freedom Flotilla. Other stories about Gaza fishermen: One boat left, A photo tribute, A family of fishermen–minus one, A man and his boat, Female fisher of Gaza.