Home » One year later: When is a war truly over?

One year later: When is a war truly over?

One year later: When is a war truly over? 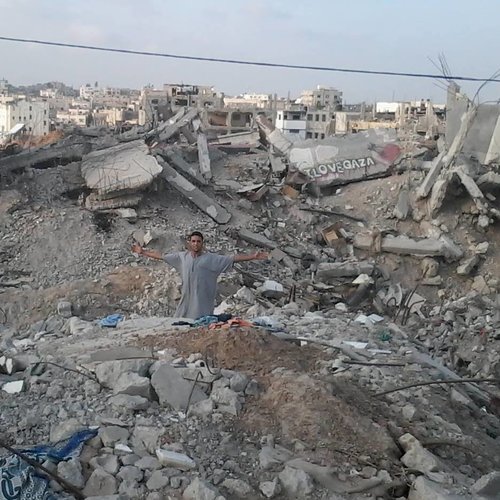 Two weeks ago, while I was sitting in class revising an assignment before a final exam in phonetics, one of my classmates took a seat next to me and after greeting me asked, “Can you explain to me how to differentiate between voiced and voiceless sounds?” “Sure,” I replied. “When producing voiced sounds, the vocal cords vibrate.”

I illustrated, spontaneously picking the word “war” as an appropriate example, since each sound of the word is voiced. “So, for example, when you pronounce the word ‘war,’ you feel the vocal cords vibrate during the production of each sound.”

“No,” he interrupted, “it’s not the vocal cords that vibrate when we pronounce the word ‘war. It’s the heart and the mind that vibrate.”

I smiled at his philosophical interjection, but I understood what he meant and he is correct.

War: the moment the word surfaces in Gazans' minds, they recoil inwardly. For me, the word brings with it considerable bitterness, with disturbing memories unfolding in my head like a movie running on a continuous loop.

July 8 marked the one-year anniversary of the 50-day Israeli assault on Gaza. More than a year has passed, but the drones’ tunes and the ambulances’ shrill sirens that together constituted the soundtrack to the catastrophe still play nonstop in my mind. Most of all, I cannot forget the feeling of overwhelming helplessness as I watched a young man shout, "God have pity on us; rescue us," before a missile from an Israeli drone shut him up as he was trying to run across the street opposite me. Such memories will be imprinted on my mind forever. But the question now is how to welcome this one-year anniversary? With tears or joy?

Joy was my feeling when I first heard the deceptive declaration, "The war is over." Like many other Gazans, when the war first captured the attention of the foreign media I’d prayed that our resilience and sacrifices would finally inspire, or at least shame, the world into forcing Israel to end its blockade. After all, more than 2,140 Palestinians had been killed, mostly civilians, and 11,100 injured; wasn’t it time to truly stop the madness? Not just now, but into the future? I’d hoped that my father would no longer need to lean on my uncles for financial help. My father, who is 56, is an Arabic elementary school teacher. He is just one of about 42,000 employees of the Hamas administration (officially dissolved last year to make way for a Palestinian national unity government), who haven't been paid a full salary for more than a year. Instead, he usually receives 1,000 shekels (US$ 270), 40 percent of his base salary, every 50-60 days.

However, a year later, that feeling of joy, which gave way to a flicker of hope, has disappeared. The war isn’t over, not really. In fact, some things are worse than ever.

Time usually changes things, but in Gaza it seems to stand still. I live in the densely packed Gaza City neighborhood of Shujaiya, now “famous” for being decimated during last summer’s offensive. Sadly, my last sight of it on the day of the ceasefire that ended the war, is still almost the same today: a war zone. Block after block of rubble and vacant land where buildings once stood. It’s still as if it had all just happened: the destruction of houses, the photos of those who were killed pasted on walls along the streets, the drones that roam through the sky as if to say, “Hey, we’re here, get ready for the next round!" Feeling safe is like a fanciful dream in Gaza. This might sound odd, and impossible for anyone else to understand, but for those of us who live in Gaza, it has become perfectly natural.

In contrast to the previous two wars in 2008-09 and 2012, which were traumatizing enough, this one was “special”—overwhelming and all-consuming, leaving nobody untouched mentally, if not physically. One year later, my colleagues at school spend their break times telling endless stories about their families during the war; whoever has the most horrible, shocking and heart-breaking tale gets the most attention among their classmates, as if it were a competition. They spend hours recalling the details of their tragedies and miss their classes just to listen to the stories.

Still, people live their lives as best they can in the ruins of their former houses. I can't help but wonder how we will all spend Eid al-Fitr, the Muslim holiday that ends the fasting of Ramadan. Can we still visit each other and sincerely say “Eid saeed” (happy Eid) as usual, when neither our shattered lives nor our destroyed homes have been rebuilt?