One year later: Gaza youth declare we are not numbers

Home » One year later: Gaza youth declare we are not numbers

One year later: Gaza youth declare we are not numbers 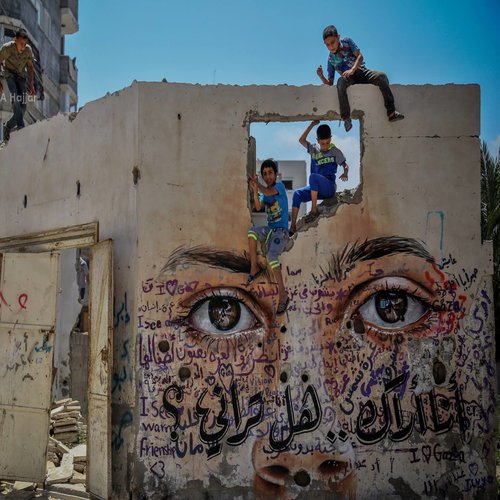 Youth in the Gaza Strip are joining together to declare “we are not numbers” through stories and art in a campaign launching July 8, the one-year anniversary of the Israeli military assault, Operation Protective Edge.

“Gaza is typically summed up with numbers: 1.8 million people, more than 2,000 killed in just 50 days, more than 11,000 wounded, more than 100,000 homeless,” notes Pam Bailey, special assistant to the chairman of Euro-Med Human Rights Monitor, which has an office in Gaza. “But numbers obscure the humanity of the individuals—their stories, their talents, their dreams.”

Under the sponsorship of Euro-Med, a project called We Are Not Numbers formed in January to help Gaza youth reach Western audiences with their stories, in their own words. Not Numbers targets developing English writers age 18-29 – a large but often-neglected group that is hit hardest by unemployment and despair. Twenty-one percent of Gaza’s population is between 15 and 24, and an estimated 60 percent are unemployed. Many of them major in English literature, in hopes that they will be able to get a better-paying job at an international NGO. When they graduate from university, however, they have no outlet for their skills and dreams.

“Last year, I lost my older brother Ayman in the war,” says Ahmed Alnaouq, 20, a Gaza project coordinator for We Are Not Numbers. “I felt lost, useless, without any hope or even desire to live. Besides being a person I loved most in life, Ayman was our family’s primary earner. My father is disabled, and I haven’t been able to find a job that replaces Ayman’s income.”

The writers, now numbering about 30, are paired with teachers and published authors who coach them to both improve their English and hone their storytelling skills. Their stories, which focus on the realities of life in Gaza, both good and bad, are published on wearenotnumbers.org as well as on news sites, blogs, etc. This summer, at the height of Ramadan, youth who lost homes, loved ones, scholarships and more are re-claiming both their holiday and their narrative, which was snatched from them last year by the war.  Every day from July 8 through Aug. 26, the writers will be joined by local artists and performers to share on the project’s website their thoughts and feelings about life in Gaza “one year later.” One of the themes will be “This is Gaza Too,” reflecting their frustration that Gaza has been defined in the Western media solely in terms of war and politics. A fundraising campaign launched simultaneously with the campaign will generate funds for expansion of the project to more writers in Gaza, as well as to Palestinian refugees in Lebanon, an even more forgotten group.

“One year after the war, Gaza is still a prison and in some ways, it is worse,” says Ramy Abdu, PhD, chair of Euro-Med. “Virtually every day, our fishermen and farmers are shot at just for working their own land and sea. Hundreds of others are refused permission to leaqve or enter. But though this campaign, the youth of Gaza are refusing to be defined by their oppressors.”