Home » One day in Ramadan

One day in Ramadan

One day in Ramadan 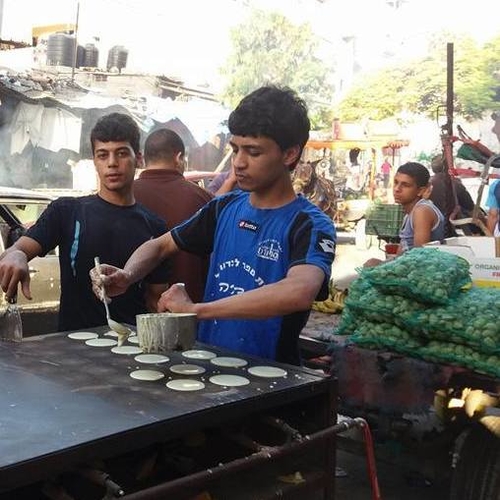 It is 3 a.m. and time for suhoor, the last meal before fasting begins during the days of Ramadan, one of Islam’s holy months. The call to prayer will waft through the clear night air at 3:50, signaling the start of the day’s long hot hours, with no food or even water allowed until the fast can be broken at night.

If Anas Mohammed Jnena were at home, his mother would call him to join his family for a meal of French fries, jam, cheese and yogurt. But tonight he is working, collecting turkeys from farms throughout Gaza and delivering them to various markets in time for the morning shoppers. Turkey is always a popular meat in Gaza, but particularly during Ramadan. So instead of eating a leisurely meal, Anas takes a quick break for a little yogurt and cheese.

“Herding” turkeys is hard, manual labor. The 21-year-old Anas estimates he, his younger brother and a neighbor collect about 200 turkeys a night, an average of about 50 from each farm—each one weighing around 33-55 pounds (15-25 kg). Before depositing each turkey in the truck, the boys have to weigh the birds.

“They kick and scratch a lot,” says Anas wryly. “It’s why I wear long sleeves.” But, he makes 30 shekels (about $8) a night, and with a youth unemployment rate of more than 50 percent, it’s needed work. Especially when you still owe the university money, as he does.

Anas and his brother begin work at midnight and don’t arrive back home until 8 or 9 a.m. As soon as they walk in the door, their mother insists they shower off the smell of birds and dirt, and they try to catch a little sleep. Before long, noon comes and they join the family for their second job on a nearby market street in their town of Shejaya—the same one where, almost two years ago, 90 Palestinians were massacred in an Israeli assault.

Here, the family makes and sells a special Ramadan treat called qatayef, a pancake of sorts that customers bring home; fill with unsalted cheese, a mixture of nuts or cinnamon sugar; then roll into a dumpling and fry.

“Most people don’t know how to make qatayef well at home,” he explains. “They don’t have a foron (the hot plate on which the batter is poured), and they don’t have the right recipe.”

Anas’s father began making qatayef batter about 20 years ago, and when he left the military and was in between jobs, he and his wife began making and selling the delicacy to earn a little extra money. Today, although the senior Jnena has a job as an Arabic teacher for a government school, he is paid only sporadically. Anas’s mother is now the “master batter maker,” Anas works the hot plate, his brothers bag the pancakes and his father makes the sales. On a good day, they make about 120 shekels ($31). However, as the weeks in the month of Ramadan pass, the sales decline to about 80 shekels a day.

“It’s not hard work. But it is really hot while cooking and I get very thirsty. Today, after a long night of working, I literally fell asleep and had to catch myself twice,” says Anas, adding that he gets only about four hours of sleep on days he collects turkeys at night.

Finally, when the time to break the fast rolls around (around 7:50 p.m.), the family packs up and goes home to iftar—the evening meal eagerly awaited after all day with no food or water. Typically, the meal is served along with kharoub, carob juice made from locust beans—a refreshing drink full of fiber, protein and antioxidants that help Muslims endure the long hours of fasting ahead.

Soon, it will be time to go after those turkeys again…