Home » Let there be light…(NOT) 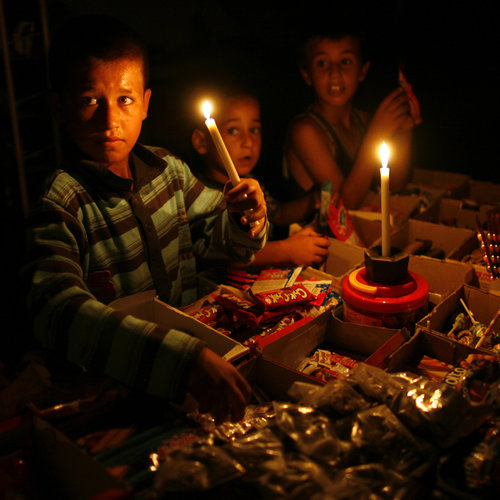 The two generators of Gaza’s sole power plant stopped operating Jan. 6 due to a severe fuel shortage—out of the 600 megawatts required to meet the needs of the 2 million people, less than 150 are available. For the residents, that means most areas are receiving power for a mere three hours in between 12-hour blackouts. (Of course, even when there isn’t such a crisis, it’s bad—usually eight hours on and eight hours off.) Who and what is to blame is a subject of many dark jokes and frustration—sometimes breaking into protests and arrests. The contributing causes cited by various reports include shortages from the Egyptian side due to frequent breakdowns in the North Sinai; corruption in Hamas, which controls the power plant and is alleged to skim fuel for its loyal members; punitively high taxes imposed on Israeli imports by the PA; and a failure by the mostly impoverished residents to pay their electricity bills. And then, of course, there is the fact that the power plant hasn’t run at full capacity in years, with Israel’s crippling blockade severely limiting imports of both fuel and parts to fix the plant, which has been repeatedly bombed in past wars.

Most residents in Gaza, however,  place a large share of the blame on feuding political leaders.

"The electricity crisis is political par excellence due to the absence of Palestinian reconciliation and internal bickering," the Palestinian Centre for Human rights said bluntly in a statement.

Meanwhile, of course, the people suffer. Last week, an all-too-common scenario occurred: a father and his two daughters were injured after a fire broke out in their home in Gaza City, caused by a candle the girls lit so they could do their homework. According to the PCHR, about 130 residents already have died from fires caused by candles and faulty generators. Protest videos are starting to pop up on Facebook. In one, for instance, an angry man says to the Minister of Energy: "What do you want us to do? Do you want us to hate our country? We won't. We hate you…. My clothes smell like smoke. I cannot have a shower. My mom cannot cook, and I cannot surf the internet….Now we have electricity for only three hours. Why??….Yet our electricity bills are the same. If the electricity comes, we pay 300 shekels (USD 78). And if it doesn't come, we also pay 300 shekels. We are fed up. Enough is enough!”

Another youth posted in response, “At the end of the day, nobody is coming to save us. They live enjoying the sweetest life, and we simply want part of it. Instead, we are dying alone. And even if the people rose up and did something in response, if they revolt against the system, Hamas would stand in the way. Fuck 'em both, the government and PLO.”

Other Gazans react with black humor or indifference. Here are a few “reports from the trenches” from writers in the We Are Not Numbers project, collected from social media postings and via Facebook chats.

What are the efforts our dear governments have exerted to solve the electricity crisis?
– Probably having dinner at a roundtable buffet.
– Precisely.

My wife asks me, "When will the electricity be on?"
I answer her, "What is electricity?"

Dammit!
It is 7 a.m. now and the electricity has been off since 5 p.m. yesterday. My laptop battery is drained and my phone is already dead. Come on, people! We are in the 21st century. I am starting to think we are still in the Stone Age and electricity isn't invented yet.

Once upon a time, a Gazan friend found a magic lantern. He rubbed it twice and the genie came out, telling the friend, “Whatever you want, I'll do it for you.” Our Gazan friend was so happy to hear this. He said, “One time I saw a movie with a dragon in it blowing massive amounts of fire and I want a dragon like that to burn everyone and everything.” The genie told him, “Stop it, man, grow up. Please search for a different wish, something realistic.” Our Gazan friend said, “OK, solve the electricity problem for us in Gaza.” The genie scratched his head and told our friend, “…What color did you want that dragon to be?”

In the beginning of the crisis, people started making fun of the situation, thinking it will end soon. But now, with only three hours of electricity a day, people are getting more and more pissed off, constantly complaining.

When the power is out, I try to entertain myself with a book. I start with a PDF book first, on my laptop. When my laptop battery starts to fade and there is no way to charge it, I switch to a paperback book I’ve set aside for such times. But even this doesn’t always work to keep me occupied, because the light from the battery is so faint and doesn’t provide a good reading environment. So, I might have a conversation with my family to pass the time.

There are so many to blame for this crisis—the governments in the West Bank and Gaza, and the Israeli occupation and Gaza blockade. But Gazans have themselves to blame, too, for staying mostly silent.

We have gotten used to the power always being out, but still it makes me so frustrated. My laptop never seems to work because the battery doesn’t last longer than three hours. I have several back-up plans, like reading a book or watching a movie on my smartphone because its battery lasts longer. Actually, the cuts are not always bad because then I go up to our house’s roof to get fresh air and have lots of talks with my sister. (It’s like a time off from responsibilities!)

Usually when the power is out, we turn on our extra battery so we have some electricity. But it can only help with the lights and wifi, and we can’t keep it on for more than four hours—which isn’t enough these days. When it is off, sleep is the most common option. Sometimes we chat with our family and friends, or listen to music or the radio on our cellphones if they are still alive. The most “funny” thing is that taking a shower (which requires electricity to heat the water) now is more difficult than running from Gaza City (in the north) to Rafah (in the south)!

The power shortage in the Gaza Strip is a war crime, committed mostly by the three illegal governments (Hamas in Gaza, the Palestinian Authority in the West Bank, and Israel as the occupying power) that do nothing for us except trade blame and accuse each other.

When the power is out, I usually think of doing something crazy to make the governments notice me. But as an Arabic saying goes, that would be like committing suicide so the government notices you, but then no one cares.

When the power is out, we have our own version of “rush hours” at odd hours of the day. It’s not when there is a traffic jam, but when electricity comes without warning. Last Friday, for example, we finally got some electricity for two hours at 4 a.m.! So my mum woke up quickly to switch on the washing machine. Even though it was so noisy, the neighbors didn’t complain because they were awake too, baking, washing and charging their cellphones or laptops.

When the power is out, I smoke, roam down the streets, hang out, listen to music. And recently I started eating too much, and becoming short-tempered. We spend so much time in the darkness. How can I study, read, write or practice anything in such a fucking case????