Home » More days of rage to come, but at what cost?

More days of rage to come, but at what cost?

More days of rage to come, but at what cost? 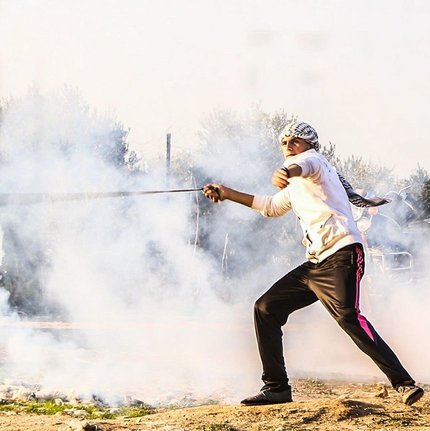 Weekly protests are continuing in the occupied Palestinian territories, the Gaza Strip and the West Bank, in response to U.S. President Donald Trump’s recognition of Jerusalem as Israel’s capital, with no sign of “surrender.” The death toll has reached 12—with most occurring in the Gaza Strip, where a caustic pall from burning tires hangs perpetually in the air. Meanwhile, amidst the chaos and rage, hopes for reconciliation between Hamas and Fatah, the two main Palestinian factions, are flagging as attention wanes.

In an attempt to ramp up the pressure on U.S. and international leaders, Fatah officials are calling for protests every day this week, both along the Gaza and Israeli border and at West Bank checkpoints. And all of the political factions have united in urging Palestinians everywhere to make this Friday (January 29) the largest “day of rage.”

Will such demonstrations be effective in provoking a backlash against the United States, or even in reversing Trump’s decision? Some Palestinians in Gaza say the protests aren’t worth the risk they pose.

Ahmed Abu Hatel, a 22-year old student at al-Azhar University, is staying away from the protests because, “despite being peaceful, Israeli forces can become violent at any time. I am the only son in my family, and my parents are old. If I died, who would take care of them?”

Instead, he said, there are safer ways to express the people’s anger and frustration. “You can write, for example, a poem about how we feel about Jerusalem, or make a YouTube video.” One example of protesting through poems and other forms of the written word is We Are Not Numbers, a Gaza-based youth storytelling project whose writers have written a number of poems and narratives expressing their passion for Jerusalem; they are published on the project’s website and shared widely through social media.

Salwa Mohammed, a 31-year-old activist working with a media-production company, agreed with abu Hatel. “The Israeli occupation doesn’t differentiate between those protesting peacefully and others.” She cited the example of Ibrahim abu Thraya, a 29-year-old paraplegic who was shot in the head and killed by Israeli soldiers just for waving the Palestinian flag during a protest two weeks ago. And yet Israeli officials say they investigated the incident and found "no moral or professional failures" by its soldiers.

“What is happening now could start a new war,” she cautioned. “And for what? Even if Trump withdraws his decision, the Israeli government will do its best to make Jerusalem the Israeli capital.”

Akram Attalah, a political analyst based in Gaza, reinforced Mohammed’s opinion. “We all know the American administration will back Israel in any new war from now on. And if another war is launched, Jerusalem would be forgotten. The war would end with a truce, and meanwhile Jerusalem would become Israel’s capital while everyone is focused elsewhere.”

What would be most effective, Attalah said, is an unarmed intifada, like the First Intifada in the 1980s. “Throwing rockets from the Gaza Strip toward Israel might ignite a new war that would abort the peaceful marches in the Gaza Strip and the West Bank. The factions need to think carefully about this.”

Another consequence of the current protests is a lack of attention to the reconciliation process that had been launched between the rival Palestinian political parties, Hamas and Fatah. Hamas leader Yehia Senwar recently said the reconciliation “is collapsing and needs to be rescued.” The government of Egypt has said it remains committed to assuring the process stays on track, and will use the distraction caused by the protests to work behind the scenes.

Gaza-based writer Essam Shawer, who writes for Palestine newspaper, says allowing the reconciliation to falter would be a mistake, since ending the division would strengthen the Palestinian leadership so it could better face down U.S. President Trump.

“After Trump’s decision, the Palestinian Authority is without a key supporter, and it needs the reconciliation to face the challenge,” he warned.

However, although more talks took place in Cairo December 27, and the official report is that "the obstacles are being worked on," most Gazans think the reconciliation is doomed.