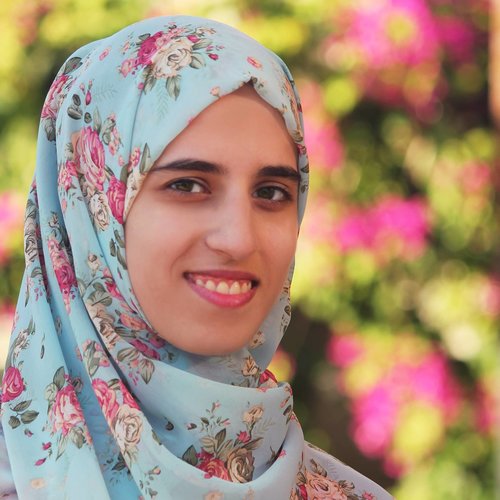 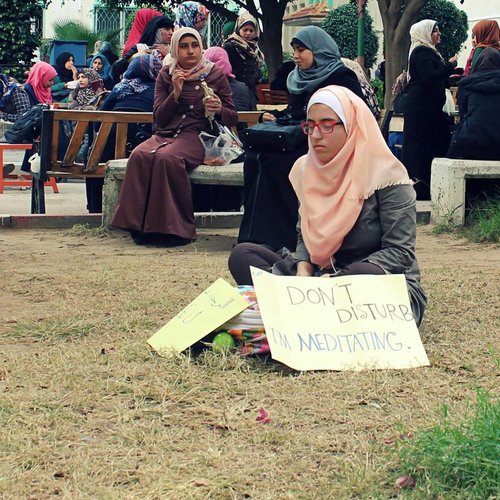 On a busy recent Wednesday, during a class break at the Islamic University of Gaza, there was a sight that was unusual—shocking even. Normally, you’d expect to see girls walking, eating and maybe studying. But amidst all that was a female student sitting with her eyes closed, very still and calm, with her legs folded under her in the center of the university's garden—not caring if her clothes were stained by the dirt or grass.

Her name is Asmaa Elkhaldi (my 19-year-old twin sister) and she was meditating, as she does a couple of times a week.

If you are a Westerner, you probably are wondering why meditation in public is so unusual. Well, Gaza is a very conservative society, where people also have to struggle to earn a living to support themselves and their families. Meditation is rare and considered a little “suspect.” But my sister likes going out of her comfort zone, and I am proud of her for it.

This is how Asmaa explains the benefit of meditation for her: “It’s like listening to the universe, listening to what it has to tell you about life. For me, it is like being open to signs sent by God.

Asmaa is studying architecture in her second year of university, although she really wants to become a filmmaker. She discovered meditation when she was surfing the Internet one day, so she decided to try it.

Every time Asmaa meditates at home, our parents are surprised, and she has to try to explain why she is doing it and how it is good for the mind and the soul.

"It is a way I can push out all the pressure I’m under and all the negative thoughts, and fill my heart with inner peace," she explains. Also, Asmaa considers it part of our religion. Islam calls us to do it as the prophets practiced, and Prophet Muhammad was meditating (although not specifically called that) on Mount Hira when Gabriel, the angel of revelation appeared.

Asmaa usually meditates in the privacy of her room; practicing it in public is a “whole new experience,” she says. “It is teaching me a lesson in self-confidence.”

When I asked Asmaa how she found the bravery to meditate in public, she said: "A lot of things I do because I believe in them don't conform with Gaza's traditions. On the day you took those pictures, I was feeling down and filled with so much negative energy. So I decided to do something different to break out of it.”

The surprise was obvious on the students’ faces and many of them said things like, "What madness is she doing?! Doesn't she feel embarrassed doing this?" But Asmaa was so focused she didn't hear or see feel what was happening around her. The power of the meditation was stronger than their negative thoughts and judgements. After she finished, some students asked what was she doing. Asmaa explained how it had restored her self-confidence and positive energy. Then she started to describe the principles of meditation and how it could benefit them.

"Doing meditation in public helps me develop the power I need to be able to express my beliefs when I am someplace new and different,” she says. “It prepares me to go out into the world and be brave enough to talk about the Palestinian cause."