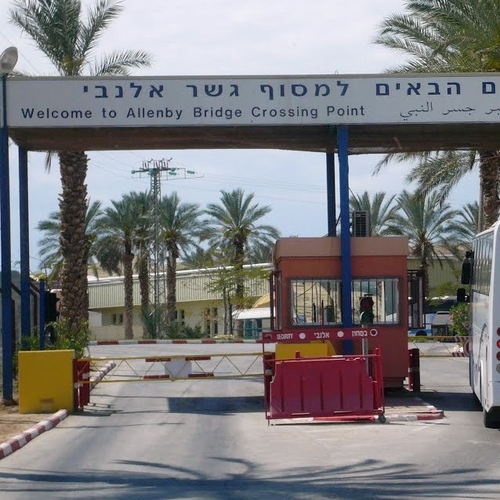 "We regret to inform you that your application was not accepted." —The Jordanian Representative Office

This message has been received by almost every Palestinian from Gaza who has applied for what is called a "non-objection" letter from Jordan since last August. Such a letter is required before a Palestinian can cross into Jordan from the West Bank to fly out of Amman to other locations. With the Rafah crossing between Gaza and Egypt closed most of the time, the Jordan route is about the only way for Gazans to travel out for university abroad and other opportunities. (They are not typically allowed to fly out through Israel's Ben Gurion Airport.)

Salsabil Samna, a student in her second year at the Islamic University of Gaza, is one of the likely hundreds of Gazans whose attempts to transit the Allenby Bridge into Jordan were rejected. After studying to get high scores in secondary school so she could study medicine in Germany, and after two years of submitting all the papers needed for the visa in addition to studying German, Samna was unable to leave.

"On the day I received my Tawjihi (high school graduation) certificate two years ago, my father and I started the procedures needed to travel to Germany," recalls Samna, whose sister lives in the country and arranged for her father to travel for a visit as well. "When we received our visas, I went to an office with my father to apply for no-objection letter. They asked for my passport, ID, photo, university acceptance letter and visa. There is a quick application for 50 shekels (about $13 USD) and a normal application for 130 shekels. So we applied for the quick one in two different offices, in the hopes of guaranteeing we would get the permits before our visa expired." (Entry was required two months after the issue date.)

Fifteen days later, her father received a text message telling him he was refused. However, a month passed and no one contacted Samna about her application. When she called the authorities in Jordan, they said she has been rejected. She asked why, but they would not give a reason.

Samna tried again and again to get a permit to enter Jordan — four times in total. She was rejected every time with no explanation.

"When my visa expired, I contacted the university and told them about the situation. They don't usually renew, but they renewed it for me," she said in relief.

The renewal arrived in less than a week. Thankfully, this time, the visa was for three months. The Rafah crossing happened to open for a rare three days at the same time, so Samna made the trek and took her chances. "But I was told there were more urgent cases than mine," she said.

One more time, she applied for a Jordanian permit. And for a fifth time, 13 days later, she was refused. Now, only a few days were left before the second visa would expire like the first. She had been told there would be no second renewal. "Rafah is my only chance now," said Samna.

Requesting permission to travel from Jordan

Since Egypt opens the Rafah crossing only a few times a year, it currently satisfies only 8 percent of Gazans needing or desiring to travel. And since the Israeli government does not allow Gaza to operate its own an air or seaport, Jordan has become been the transit route of last resort.

In addition to Gazan Palestinians, there is another, even larger group who depends on Jordanian permission to travel: the tens of thousands of people living in the West Bank, but lacking status with Jordan. According to Human Rights Watch, these include Palestinians who moved to the West Bank from Gaza, arrived with the Palestinian Authority in the 1990s and those who obtained Palestinian residency (controlled by Israel) via family reunification, also mostly in the 1990s. Although these people live in the West Bank, they still require special Jordanian permission to travel via Allenby.

However, beginning in August 2015, individuals, lawyers and human rights organizations began to document consistent refusals or non-responsiveness to requests for no-objection letters. Prior to that time, the Israel-based Legal Center for Freedom of Movement (Gisha), reports that its clients received Jordanian transit permission relatively easily. There were almost no recorded cases of rejections, says spokesperson Shadi Butthish.

Now, almost every client reports that his or her request for Jordanian permission to travel to Amman has been rejected. Between August 2015 and the end of January, Gisha received requests for help from 58 people who were refused the no-objection letter, including 16 seeking family reunification, 37 students with university acceptance letters and visas to study in third countries, and five people accepted (with visas) to conferences and training programs abroad. The Jordanian authorities either refused these requests with no explanation or did not respond at all, even after months of waiting.

For people who are unable to obtain Jordanian permission to enter Amman, the ability to travel abroad is blocked altogether. Israel will not consider requests to exit Gaza via the Erez Crossing unless a Jordanian no-objection letter already has been obtained.

"We have asked Jordan for the numbers — how many people are traveling now, how many are requesting to travel — but have yet to receive a response," Sari Bashi, who is the Israel and Palestine country director for Human Rights Watch. "I want to emphasize that the people requesting the no-objection letters are requesting permission to transit, not to stay in Jordan. Most provide, as part of their application, a copy of a foreign visa or residence permit, and a copy of a plane ticket originating in Amman and taking them elsewhere."

The only Palestinians from the targeted groups who have eventually been able to enter Amman legally to fly out appear to be those with VIP connections or who are participating in programs sponsored by third governments with influence on Jordan and that are willing to intervene directly — such as the United States and France. For example, rapper Ayman Mghamis succeeded in exiting to Amman with the help of the French consulate, which put all of its efforts to obtain the letter so he could perform in concerts organized by the French Institute of Gaza.

"I applied for a no-objection letter three times this year and I was rejected every time," said Al-Ramlawi, who was awarded a scholarship to visit Italy for a month as an exchange student in a program called Erasmus Mundus. Her job is to restore archeologically important buildings for the Islamic University of Gaza, and she wanted to conduct related research on techniques.

"The university I was to attend has a laboratory that can't be found here, with experienced supervisors," she said sadly.

The Italian university contacted the Jordanian embassy, as well as the Palestinian Authority in Ramallah, but all in vain. Ramlawi lost her scholarship.

Why is Jordan suddenly shutting the door on these Palestinians? No one has been able to get a straight answer. Human Rights Watch staff say, "We hear informally that Jordan doesn't want to be asked to 'solve Gaza's problem' or be seen as an alternative to Egypt for crossing."

Mghamis has still other theories.

"The reason is obvious though for anyone who follows politics, particularly in the Middle East," he says. "Gaza is considered an armed area that belongs to Hamas, which is totally wrong. The majority of Gazans are not Hamas. The second reason is that Israel has a big influence, since Arab countries follow what it says. Thirdly, the media portray us all as terrorists."

Whomever or whatever is behind this practice, says Bashi, it is collective punishment of 1.8 million Palestinians in Gaza. "Because we fear that many of the travel restrictions imposed on Gaza [by Israel] stem from forbidden collective punishment, we would also say that Jordan has a responsibility not to recognize such unlawful policies and to play a positive role in mitigating their effects."

Bashi calls on all interested parties to meet with and appeal to the Jordanian embassies in their countries, as well as their own government's state departments, to change their practices.