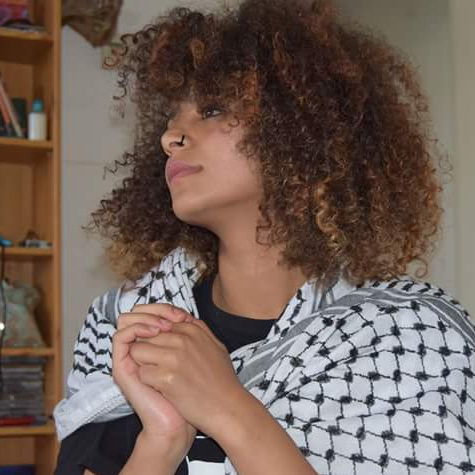 Palestinian prisoners from across the political spectrum have pledged to join a hunger strike led by imprisoned Fatah leader Marwan Bargouthi set to begin rosy, Palestinian Prisoners Day. Prisoners affiliated to the Palestinian People's Party announced they would undertake what has come to be known as the “Freedom and Dignity” strike. The strikers’ demands focus on prison conditions ranging from more frequent family visits to access to better health care. In this piece, I remember my own father’s hunger strike.

“I was a normal boy who grew up witnessing the oppression and persecution of the Israeli occupation. This is what motivated me to do my duty as a Palestinian to defend my country in all possible ways.” That’s how my father summed up his boyhood years growing up in Jabalya, Gaza’s largest refugee camp. “Do my duty,” to a Palestinian, means resisting the oppression of the Israeli regime that pushed my ancestors from their homes in 1948 and that continues until this day. For my dad, the consequence was a total of 15 years in prison.

The first time my father stepped into an Israeli prison was at the age of 17, after he participated in a demonstration in the camp in 1967, the year when Israel invaded and took control of the West Bank and East Jerusalem. He was freed after two months of interrogation, but arrested again for a few months in 1968 and again in 1970, since by that time he had become an active and influential member of the Popular Front for the Liberation of Palestine (PFLP). He is proud of the fact that despite the torture techniques employed by his captors (which he does not like to discuss), they were not able to get any information from him.

And then came November 1972. Other Palestinians seized by the Israelis were not so strong and admitted his involvement in political actions. “I was sentenced to seven lifetimes plus 10 years. I only felt angry for my aging mother, who was trying her best to hold her tears, although I knew very well her heart was splitting into pieces,” he recalled, when I asked him again about his memories for this story. I commented that I would have gone crazy if I had been in his place, but he simply said that we, Palestinians, have no other option but to resist no matter what the cost.

Thinking deeply about my dad’s words and trying to imagine a mother’s thoughts and feelings after she learns she will be deprived from her right to see and hug her son for the rest of her life made me tongue-tied. Dad tried to bridge my silence and the emotions that welled up within it by describing his new “home” in Israel’s Beit Leid prison.

“There were 20 men living in a room just 3.5 by 3.5 meters, including a toilet and a sink. Each one of us had a space of just 30 centimeters in which to sleep, on the ground.” I jokingly replied, “You must have really suffered while sleeping because of your height.” (He is almost 2 meters – 6.5 feet – tall!) He laughed and added that his friends donated some of their space to solve his sleeping problem. I paused again to put myself in his shoes and asked about the way they spent their time. He said the books provided by the Red Cross were the cure for their suffering. I had wondered about the number of books he had read in his imprisonment years, so it was a good chance to ask.

“The number is uncountable. We had nothing to do but read books. At a minimum, we’d read three books a week,” he replied.

To create a feeling of instability in their captives, the Israeli occupation forces was moved them from one prison to another. In 1973, he was taken to Beir Saba’a prison and mixed with Israeli criminals.  The conditions were particularly harsh: dirty food, extreme crowding, only short breaks outside. They protested this by refusing to receive visitors, shave, change clothes and take breaks for nine months. “We didn’t even see the sun once,” he recalled, his voice shaking even now.

However, although the Israelis would finally respond to the prisoners’ demands when they went on strike, “it would last for only one or two months. Then they’d take us back to zero level.”

One of the prisons to which he was moved was Nafha, which he always described as if it was a different period of his life. I had not been aware of the exact reason for that, but everything became clear when he started telling me about his participation in a 33-day hunger strike in 1982. It which is known as the first and longest hunger strike in the history of the prisoners’ movement at the time, and was in reaction to the harsh treatment and deprivation of basic rights.

“I survived 18 days on only water and salt, until an Israeli soldier forcibly fed me milk through a tube inserted into my nose and through my esophagus into my stomach,” he said. Three of the strikers, all his friends, died.

This would have been all there was of my father’s life it if had not been for Ahmed Jabril, the general commander of the PFLP, who managed to negotiate an exchange deal with Israel that freed him in 1985. The happiness he felt upon hearing the news was overwhelming, yet it was incomplete.

“There is nothing more precious than freedom, but we left comrades behind us. Many of them are still held in the Israeli jails until this moment,” he said, and the sadness I heard made me fall silent again.

“The process of adapting to normal life, once he was released, was hard and long. However, his life dramatically changed for the better changed when he met my mother. I could hear my mum’s happy laughter over the phone when he expressed his love for her.

That happiness was tested many times. My dad was arrested three times after his marriage.

“The hardest moments were when I couldn’t be next to your mom when she gave birth to Majed and Majd (my older brother and sister),” he said. “Shahd was only 20 days old when Israeli forces broke down our home’s door and took me to the prison again.” I could tell he was holding his tears back. Thinking about my siblings’ birth stories, I realized how lucky I was. I wouldn’t have come to this planet if he had been held longer.

My family’s story is only one among thousands. Dad considers the 15 years he spent behind occupation bars as nothing compared to the plight of other prisoners. Thirty-two years have passed since his last imprisonment, but nothing has changed. Israel keeps depriving us of even our basic rights as human beings. And resistance of any kind is punished harshly, Today, there are 6,300 Palestinian political prisoners in Israeli jails, each with a painful story to tell.

My dad has always been the role model in my life. I have always been proud to be my dad’s daughter. His struggle, determination, strength and knowledge contributed much to my personality.  Being a former prisoner’s daughter has instilled in me an unstoppable determination to break all borders and limits. I struggle against everything that violates my freedom and that of my people.