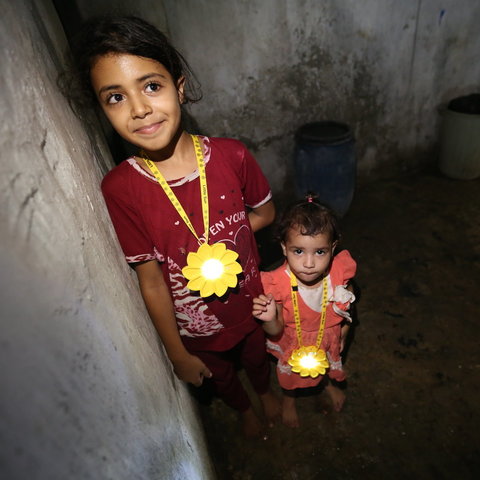 One day I found myself weaving my way through the zigzagging, narrow alleys of the al-Shati refugee camp in western Gaza City. It is the most densely populated refugee camp in the Gaza Strip and I was heading to the home of Ahmed al-Aswad. In fact, the streets were so narrow, and the neighborhood was so crowded that I could hear what the residents were chattering about inside their apartments and smell what they were cooking.

Then I stepped into Ahmed’s house and was plunged into utter darkness. The electricity was out and it literally seemed like a haunted cave! His entire living space is just a 12 x 6 square-meter (129 x 65 square-foot) concrete box. There isn’t even one window through which natural light or fresh air can enter. I began to sweat in just a few seconds, sweltering in the blazing heat. The floor was bare concrete and the toilet and shower were packed into a 0.5 x 1 square-meter (5 x 11 square-foot) room, without a door or even drape. With no room left over for a kitchen, all eating supplies—such as cups, dishes and flatware—are stored in one big container. As for sleeping arrangements, there is only one bed for the seven-member family: Ahmed, his wife, three girls and twin boys. This, I thought, is true misery.

I visited Ahmed’s home as part of the We Are Not Numbers team that supports American NGO Rebuilding Alliance, which—as one of its activities—distributes portable solar lamps to those in need. Ahmed hurried to bring us the two chairs he had, leaving three of us standing. I could tell this humiliated Ahmed. Meanwhile, it was so dim inside I could barely recognize the faces around me. All they had to lighten the gloom were two small LED devices. I used my phone flashlight while looking around, observing.

The 38-year-old Ahmed is originally from the Mediterranean coastal city of Haifa, in what is now Israel. His ancestors were revolutionaries. His father, Waleed al-Aswad, has lived in exile since the 1970s, since his name is on Israel’s most-wanted list along with other members of the the Popular Front for the Liberation of Palestine (PFLP). In addition, his uncle is the martyr Mohammed al-Aswad, a prominent PFLP military leader known as "the Guevara of Gaza."

In the aftermath of the 1948 Nakba, in which an estimated 700,000 Palestinians were forced to leave their homes to make way for Israel, Ahmed's parents fled to a refugee camp in Jordan.

"When I was a child, our life as refugees in Jordan was intolerable. So, we came to live here in Gaza," Ahmed sighed. "My father used to tell me about my grandfather's life in Haifa. He owned a ‘palace’ overlooking the sea. Our life today has been reduced to a small box."

When Gaza's Great Return March launched to demand freedom from Israeli control, Ahmed felt it was his moral and national duty to participate in the weekly protests along the border. However, he was shot with an exploding bullet by Israeli snipers while standing near the fence and raising a Palestinian flag. The bullet passed through his right leg and lodged in the left, causing severe damage.

That wasn’t Ahmed's first time to venture near the fence and be shot as a result. In 2015, when Palestinians in the West Bank protested Israel's deployment of forces and installation of cameras, metal detectors and iron gates in Jerusalem’s al-Aqsa Mosque compound, Ahmed demonstrated at Gaza's border until he was shot in his left leg. Due to the cost implications of his injury, he was forced keep his 14-year-old twin sons home from school. They looked for jobs to keep their family afloat.

Until his second injury, Ahmed went to the march every Friday on crutches. His biggest fear is U.S. President Trump's cuts to funding for UNRWA, the U.N. agency that provides 5.3 million Palestinian refugees with basic needs and humanitarian services.

"Ever since I heard the news, I couldn't resist worrying; we totally rely on the four sacks of flour, cooking oil and rice we receive from the agency. If UNRWA stopped its supplies, my family would starve," he explained.

Since the house is so small, Ahmed's wife, Rajaa', spends most of the day on the outdoor step, breathing the fresh air and chatting with her neighbors. Ten-year-old Guevara, named for her uncle's nickname, suffers in other ways. Since Israel’s last major offensive in 2014, she feels fear when darkness falls at night and the electricity is out. She remembers the sound of Israeli bombs that often came at night. She takes some comfort from the solar lamp given to the family by Rebuilding Alliance, called Nur al-Amal (light of hope). Rajaa’ says Guevara is mesmerized by these lanterns. When Ahmed first brought one home, she literally jumped up with joy.

‘’A million thanks to Rebuilding Alliance for granting us these nice lanterns that paint a smile on our kids' faces!" Ahmed said. "Now, Guevara can go to the toilet alone at night without being accompanied by me. She no longer feels scared."