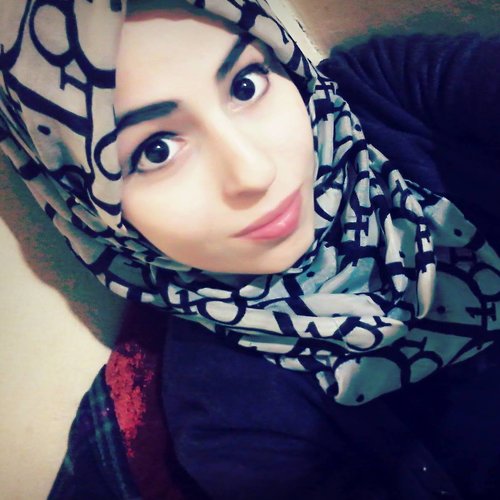 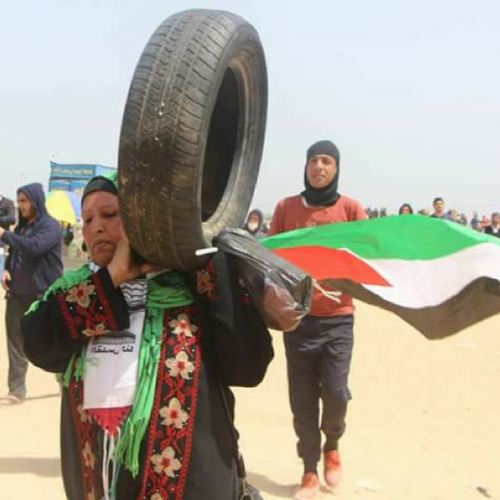 Hidaya Abu Hasaneen, 39, is seen week after week at the Gaza City encampment of the Great Return March, carrying a bag stuffed with cotton and perfume bottles, running to anyone overwhelmed by teargas or shot by a sniper.

"I am always there, walking around and spraying perfume on protesters who faint so they can wake up before another shot nails them and they die," Abu Hasaneen explains.

Since the beginning of the Great Return March on March 30, 2018, Gazan women have maintained their powerful participation. Despite the teargas and live ammunition directed toward the protesters by Israeli soldiers, women have not stepped aside. And their impact has been profound. I believe one of the central reasons the Great Return March attracts international attention, breaking stereotypical notions the world holds about Palestine in general and Gaza in particular, is the creative, peaceful events women lead at the march: patriotic singing circles, reading groups, dabkah performances, cooking of traditional food and flying of kites displaying the colors of the Palestinian flag (to name a few).

Women participants include paramedics, journalists, camera operators and doctors. They are mothers, teenagers and elders. I talked to some of these courageous women to seek their perspectives.

A friend introduced me to Abu Hasaneen, who gladly agreed to an interview. Abu Hasaneen was injured when a bomb fragment pierced her knee. But after only five days in the hospital she returned to the protests, despite the pain in her leg. Abu Hasaneen offered thoughts on the particular role women play in an arena long dominated by men: "Men depend on us (women) to cover their backs. Since Israeli snipers mostly target men, we understand our role in providing a smokescreen by burning car tires and carrying stones and water bottles for them in our dresses."

Abu Hasaneen also highlighted how women provide emotional support and model wisdom under stressful situations. "Men by their nature are really intense in those events and so put themselves at risk of getting shot," she explained. "As women, we often are able to think more calmly. Women help men think more clearly about risky and hasty actions they might take."

Since the first week of the protests, Abu Hasaneen has created a weekly painting, naming each art work after the theme of the coming week's protest.

"It's my way to illustrate the special theme of each week," explained Abu Hasaneen, showing samples of her work.

Zahr al-Najjar, a 20-year-old woman who works in mass media and communication, fully supports the Palestinian right of return, but opposes the ongoing protests.

"The event organizers recommended I participate, so my [social media] followers would become motivated to participate as well," recalled al-Najjar, who has nearly 13,000 followers on Facebook and 116,000 on Instagram. Initially, she liked the idea of peaceful protest, but as she observed protesters being shot, she began to feel Gazans were taking too great a risk. "It was supposed to be peaceful, but then it wasn't. People were being killed by Israeli soldiers, so then I decided to not participate anymore. I didn't stop in order to protect myself, but to protect those followers of mine who went there after they saw me participating. I didn't want to feel the guilt if they got killed or lost a leg."

Indeed, as of publication, 256 Palestinians have died due to the protests and 29,382 have been injured. Other women, however, continue to support the cause, despite the price. Entisar Abu Hasaneen, Hidaya's mother, participates with her children and grandsons.

"I can't run and throw stones due to my age, but I want to be there so I can encourage and guide my children and grandsons at least," she insisted.

She lost her son, Musa, a 35-year-old paramedic, when he was hit by live ammunition while helping injured participants.

"My son was there because that was his job, to be a paramedic. He was running to save lives when he got a bullet in his chest," she recalled.

Entisar witnessed the shooting. With tears in her eyes, she described running to her son, trying to stem the bleeding with her hijab and holding him in her arms as he died. "I never hated the protests. His fate was to be a martyr and nothing is more beautiful than dying as one."

A mother’s love also is what motivated 25-year-old journalist Esraa Areer to cover the protests. In Areer’s case, however, it was the love for her homeland with which she was raised by her mother.

“My town of origin is Kfar Maimon, only a few kilometers from where I am standing [at the border]. Can you imagine the frustration I feel seeing my grandparents’ home yet unable to even step closer to it?" asked Areer. "Yes, as a journalist, I go to cover and document what is happening against my people, but my eyes are always far beyond the Israeli soldiers [trying to see my village]."

According to Areer, the only difference between the early days of the march and the present is that in the first months there were activities at the border multiple days of the week. Now, protests mostly are held just on Fridays. Areer emphasized the peaceful nature of the protests, estimating that 45-50 percent of the participants are women.

Areer was injured three times while reporting: twice by teargas and once by a rubber bullet in the knee She underwent surgery and now is unable to walk and thus resume reporting at the protests. Yet she is determined to return as soon as she is able.

"I can't wait for the day when I am able to participate again," she said firmly.

Entisar Abu Hasaneen shares Areer’s determination. She described women—especially mothers—as the source of men’s emotional strength. She encourages all the women in Gaza to continue to participate, confident that if women set this example, the men will follow.

"It is because of us (women) that the next generation is growing up with the love of their origins and their land,” she said. “No one creates love more than women." 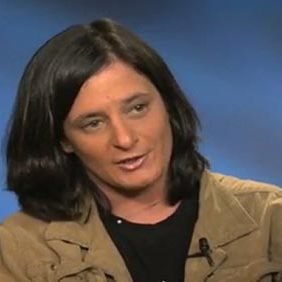