Home » Gazan youth say, ‘Stop protesting in return for not getting killed? We want more than that’

Gazan youth say, ‘Stop protesting in return for not getting killed? We want more than that’

Gazan youth say, ‘Stop protesting in return for not getting killed? We want more than that’ 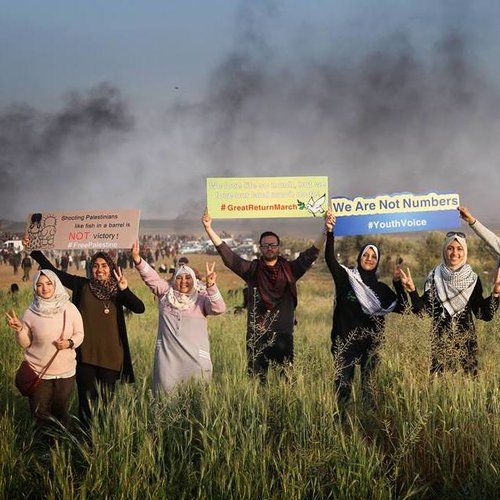 March 30 is the one-year anniversary of the launch of the Great Return March protests in Gaza—called officially to demand Palestinians’ right to return to their ancestral homeland, but really about the continuing suffocation of the Strip’s 2 million population in ways both large and small for the past 12 years. In the most basic terms, the protests are the “what-else-can-we-do” action of a people who know they only get attention when they are being killed and wounded in large enough numbers to make the international news.

“We’re tightening the security ring around the Gaza Strip,” Israeli Prime Minister Benjamin Netanyahu says. “I’ve recently ordered that [military] units be reinforced, that tools be added, in preparation for an extensive campaign.”

To prevent a massive, brutal pushback, he is demanding that Hamas halt the weekly demonstrations and assure this weekend’s expected massive protest be nonviolent. That is a rather jaw-dropping demand to make, given the conclusions of the recent U.N. Human Rights Council investigation into Israeli conduct during the weekly protests:

With the exception of [two incidents,]the commission found reasonable grounds to believe that, in all other cases, the use of live ammunition by Israeli security forces against demonstrators was unlawful. Victims who were hundreds of metres away from the Israeli forces and visibly engaged in civilian activities were shot, as shown by eyewitness accounts, video footage and medical records. Journalists and medical personnel who were clearly marked as such were shot, as were children, women and persons with disabilities. The Israeli security forces killed and maimed Palestinian demonstrators who did not pose an imminent threat of death or serious injury to others when they were shot, nor were they directly participating in hostilities.

Support for the Great Return March within Gaza is a complicated subject these days. The number of dead and maimed has mounted so high (270 killed and 15,528 injured severely enough to require hospitalization) that to many, the price is not worth what they see as zero tangible benefits. Add to that a perceived increasing control of the protests by Hamas, compared to the more grassroots-led start of the marches, and you have a lot of mixed emotions. But how would Gazan youth respond to this Israeli ultimatum? A few members of We Are Not Numbers respond:

It's as simple as this: We protest because Israel is attacking us. The GRM calls for lifting the siege and our right to return and this is non-negotiable! Israel cannot impose a suffocating siege on Gaza for over 12 years, murder our children, deprive us of our basic rights as human beings, then tell us not to protest. And by the way, does the offer to not attack us include giving us our freedom, dignity and human rights? Does it also mean lifting the siege, letting us live in peace and recognizing our right to self-determination? I don’t think so.

This is ridiculous. Regardless of my opinion of the GRM, Israel doesn't have the right to link the protests to an agreement not to terrorize us. It is Palestinians’ right to return [to our ancestral lands] and to live with no blockade or siege. Even international law confirms that, yet Israel always ignores the international community.

What would guarantee Israel would keep its promise? Nothing. Israel is known for breaking promises throughout history.

As for the Great Return March, I don’t think it can make Israel change, but we have gotten attention in the media—although that still didn't change anything, in real life. We just receive prayers and thoughts. And that's not enough. What we really need is for Israel to be forced to comply with international law, for once in its history.

I am not a supporter of the return marches, but they are a right for every Palestinian. Bargaining away our rights is unacceptable. Thus, in that sense, I believe they should continue, despite the continued attacks and Israeli bombardment, until Israel's ugly reality is revealed to the world.

They offer us what? That is just stupid and sort of funny. People here started the Great Return March because Israel already was harming us. It should be the other way around: "Israel, give us our rights and then we will stop protesting.”

So, Israel stops attacking our people for a bit and then what? We have to suffer in silence. When we protest, it is the only time our voice seems to be heard. In any case, stopping the protests without achieving anything would be a betrayal of those who were killed at the borders.

We will continue marching! If marching is annoying Israel, then I say, “let's march!’

I believe it is time to stop the Great Return March, but not because Israel orders it. We are losing many people who could have lived normally with their families and beloved ones. My heart has been shattered during the process of writing stories about the people killed and maimed for a book on the GRM for We Are Not Numbers. The GRM hasconnected the 2 million people in Gaza through pain; we all know someone who lost someone. The Israelis aren't trustworthy. They shoot even those people who say we will go to the march but stay in the back.

The Great Return March isn’t really the reason why Israel is attacking us. They have been doing it for years now. So, no matter what we do, it won’t stop.

These voices have a message for international NGOs, governments and activists alike: The youth of Gaza believe that Israel will keep terrorizing them whether they protest or not, and that risking their lives (being killed or maimed) is the only way to get our attention. Only we have the power to show them such a huge price isn’t necessary.