Home » The cat that stole my heart

The cat that stole my heart

The cat that stole my heart 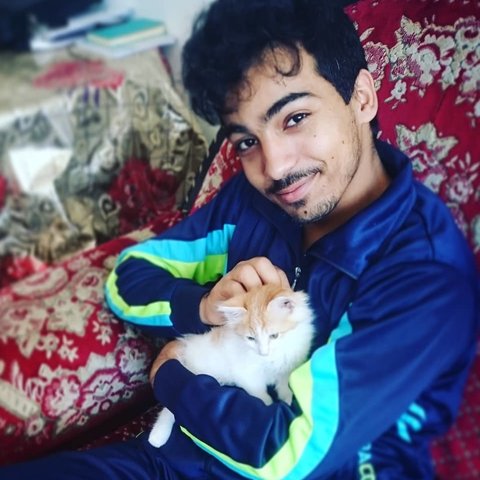 Ever since I joined We Are Not Numbers in the summer of 2018, I have thought about the stories I’d write, and how good and distinguished they’d be. I looked for people with unique stories that make them stand out. I interviewed some, but unfortunately, what I heard was mostly the same story, repeated over and over. Everyone in Gaza seems to struggle in the same ways. So, I started listening to people I usually don’t pay attention to. I was hoping to hear or see something new. Months passed, and I didn’t find a good story I believed was worth sharing with the world.

Then, on December 22, an accident occurred. A street cat that looked almost the same as mine died. The corpse was right in front of my home. Not long before this poor cat's untimely death, I had let my own cat, Shinsuke, into our apartment, fed him and put him in my room. My brother called, asking why I had let my cat out. I didn’t understand at first. Why was he concerned about where my cat was? But then he said, “Your cat is dead in front of the building, and some kids are messing with its dead body.” If I hadn’t just let Shinsuke in, I would’ve had a heart attack. I was sad that the street cat died but was hugely relieved it was not Shinsuke. Then I realized I love and care about something most people in Gaza don’t talk about: animals.

We Are Not Numbers cares about the stories of individuals and opposes the media for defining us and others around the world in terms of numbers. That belief in humanity should apply to animals as well. Animals are not even considered numbers here because no one talks about the animals of Gaza. That motivated me to write my first essay for We Are Not Numbers, about my personal experience with animals and why we should care about them, just like the world needs to care more about Palestinian lives, particularly Gazan lives.

My introduction to animals

My name is Raed, and I have a pet cat—a friend, a “son,” called Shinsuke (a Japanese name to which I just took a liking). Shinsuke changed my life the moment I started parenting him. But that’s not how my story begins. In 2016, I traveled to America as an international exchange student. I was exposed to a lot of America’s cultural aspects, but the one that changed my life is the people’s tremendous love for pets. Most American families I met had pets, primarily dogs. I had nothing against pets, but I didn’t get why they were such a huge deal there. I noticed how pets were so well taken care of—living in the home with their owners, kept clean and given good medical care. This will sound insane, but I felt sort of jealous of those pets. They basically were given everything I’d ever wanted. I remembered seeing a photo online of a hard-working kid lifting heavy things, looking exhausted, dirty and hungry, while a dog was spoiled with cuddles and food behind him. At first, it seemed to me like it was this kid’s life versus the dog’s life: How “sick” it was to value an animal more than a human!

When I returned to Gaza, I decided to create a video on that issue. I wanted to ask Gazans about their lives, comparing them to pets’ lives not only in America but in much of the rest of the world. I didn’t follow through on my idea, though, because I had no equipment at the time, not even a smartphone. So, I decided to postpone it until I could get at least a decent phone. That took months, during which I had my first experience with a true pet on a daily basis. She was a dog named Jessica and belonged to my uncle. She lived on the roof and I made friends with her, playing with her almost every day. (Jessica eventually was given to another family so she could have puppies.)

Actually, I was “primed” for my love for Jessica by an earlier experience in America, with Bonnie, the dog owned by a family I met while there. They considered Bonnie a family member. I hadn’t mentioned in my application for the exchange program that I was scared of dogs because I didn’t want it to be a barrier. But boy, was I! When I first arrived at the Chambers’ house, Bonnie barked very loudly. I was scared to step out of the car! Janet, the mother in the family, assured me that Bonnie was friendly and just was excited to meet new people. She talked about Bonnie as if the dog was a human, a daughter.

Janet put Bonnie into another room and closed the door. I entered the house, and took a look around. I sat on the couch and tried to chill, since Bonnie was still barking. When Janet told me she would let the dog out, I wasn’t quite ready. The second she opened the door, Bonnie ran out, smelling someone new. She didn’t see me, so she ran to the entrance, then looked back and that was it. She ran toward me and jumped up. I could feel my heart beating as fast as when I’m about to have a final exam for which I haven’t studied. I didn’t make a move while Bonnie licked me. Janet tried to get her down, but for a few seconds, she couldn’t control the dog. Bonnie was so hyped up, and I got even more scared.

Then Bonnie calmed down and I put my hand on her head. We looked at each other, I felt a connection and—yes—love.  I finally understood why Americans love pets, especially dogs. Bonnie and I became close friends. She would stare at me the entire time I was in the house, waiting in front of my door when I slept there. She wanted to be wherever I was. I was so sad to hear the news when she died of old age

Thanks to Bonnie and Jessica, I decided I wanted my own pet. In February 2018, my dad brought home Shinsuke, a month-old kitten. Raising Shinsuke definitely wasn’t a piece of cake for me, since it was another first in my life. We had had cats in our house before, but they stayed only temporarily. People here, including my parents, don’t pet animals. It’s just not in our culture. For example, most animals are strays, and don’t look or act very friendly as a result. So they learn to be afraid of them. But not me. Not only did I fight for Shinsuke to stay in my room (and often in my bed), I also do little things for him that I wouldn’t for myself. I even cook for him! I make sure he gets the injections he needs and keep him clean and groomed.

I care about all animals now. On a rainy day on Dec 27, 2018, I went to Gaza City to drop by We Are Not Numbers’ office. On my way, I happened to observe two situations involing suffering donkeys. The first was tied to an electrical pole, alone in the rain. I wondered how that donkey felt. Was he cold? Sad? Lonely? The cart to which he was tied indicated the owner was poor. He uses the cart to clean the streets and collect trash. It was raining heavily and it seemed clear the driver had stopped to go where it was dry. But what about his donkey?

The second donkey was dragging a cart with three people in it, a man and two young girls. It was still raining. I felt sorry for all of them—the poor man who couldn’t afford a taxi, his daughters and the donkey. How can I blame humans if their lives are just as bad as animals’?

I looked around and sought answers. I talked to people, and expanded my limited knowledge about life in general and life in Gaza. I would be lying if I said I figured it all out. But I thought of some solutions. Spreading awareness of what I’ve come to know and appreciate about animals among people in Gaza has to be step No. 1. I’ve even given a few presentations about it. The most basic thing we, as the people of Gaza, can do is watch what we throw in our trash bags. The cat that looked like mine, who I found dead in the street, was poisoned. Apparently, she ate some rat poison.

Maybe one day Gaza will be a better place for people and animals. Maybe Gaza will be livable again. God bless the people of Gaza and the animals of Gaza.

Epilogue: On Thursday, January 3, I fed Shinsuke, then played with him from about 10 to 11 p.m., hoping he'd get tired and go to sleep. But he still wanted to go out, so  I opened the door. I didn't know that would be my last time with Shinsuke. He went out, and never returned.

I believe someone stole him. Whoever took him didn't just take a pretty cat. He took a piece of my heart. He took the companion who helped me get through my depression as I fought that battle on my own. Many people have offered tips to “just get over it already.”  One friend even brought over a “replacement cat.” She was sweet, but not Shinsuke. I'll always care when I encounter a stray cat. But I will feed them, then set them free.

What people don’t get is that to me, Shinsuke is not just any cat. Shinsuke is like a baby I raised and loved like a child. I don't want another cat. I want Shinsuke back.