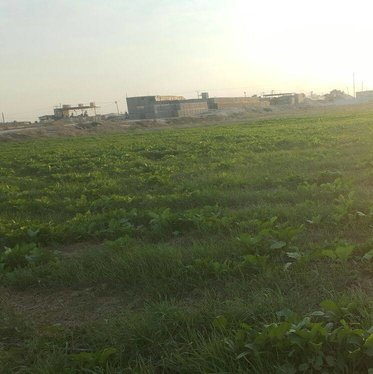 In a very scary, one-of-a-kind experience, I joined several other members of We Are Not Numbers to visit the northern border of the Gaza Strip, called Shijaeya, which was heavily attacked during the 2014 war.

As we approached the area, we saw a bleak factory, a few houses and stretches of grayish-looking plants. But what captured our attention were the yellow vehicles about 500 meters (about a third of a mile) away and a towering barrier still under construction. Israeli Prime Minister Benjamin Netanyahu is constructing a "security fence” to stop the digging of tunnels to escape his blockade of Gaza.

With every step I took closer to the fence (what I would call a wall), my heart sank and my feet felt heavier. It felt as if we were only meters away from death. At any moment, a bullet could pierce our skin. This feeling, even if it might have been an over-reaction, was horrifying, especially when we actually heard gunshots. I started muttering the Shahada. [This is a verse in which Muslims attest that Allah is the only true god, and that Muhammad is Allah’s prophet. In Islam, whoever says these words before their death will be granted entry into paradise.]

Then we stumbled across a concrete hut with a brick roof. It was the only building in the area, and just 300 meters from the Israeli wall. It was not a place where people live; rather, it provides a resting place while working the fields.

I sat with Um Ismail, the wife of the farmer, and tried to chat with her. She was very cautious—fearful, I think, to say anything that could be read by the wrong eyes.

As the wife of one farmer and the mother of five more who work a total of three plots, Um Ismail wakes up at dawn every morning to accompany the six men to their land, both to calm her worries and to serve them food when they break. With only elementary or high school education among them, farming is the only profession on which they can rely. They did very well when they were able to plant olive trees, pickling their fruit or crushing them into oil. That came to an end, however, in 2001, when their trees—which take three to five years to bear fruit—were plowed under by Israeli bulldozers.

Later, in 2006, their two other olive tree groves met the same fate. Psychologically, they were not prepared to start over again from scratch, with a crop as slow-growing and valuable as olive trees. Instead, they have settled for beans and radishes.

Still, even today, their crops and their livelihood are at risk. Israeli settlers are close enough to flood their harvest with sewage, several times destroying their long-awaited harvest. And during the 2014 war, the families’ harvest again was plowed under by the Israelis.

As the sun set, Um Ismail told me that Israelis sometimes shoot at this time of day, claiming they’ve observed suspicious movements that could be resistance fighters in tunnels. Once, she was alone in the hut and one of her sons was working their land closest to the Israeli wall. Suddenly, she heard shots. She began trembling and sweating. All she could do was to crouch on the ground, attempting to hide and praying her son would return safely. Fortunately, her prayers were answered that day.

“Living near the Israelis is a curse. But, what else should we do? This farm is our only way of living!” she says.

In Gaza, we’re not only imprisoned; we’re also not allowed to move freely in what is left for us of our homeland.

I stood and gazed at the land on the other side of the wall, the part of our land we can’t reach. It looked so different from the side: I could see lush green and trees. It looked like a forest. Yet on our side, there are only barely planted lands. And, as the sun disappeared, lights from the other side shone brightly as we were swallowed by darkness and the sounds of power generators.