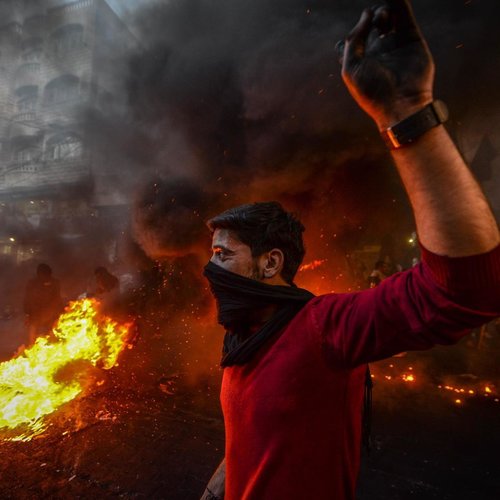 In the 10 days since American president Donald Trump announced his decision to recognize Jerusalem as the Israeli capital, protests have continued to boil across the occupied Palestinian territories, including Gaza. At least five Palestinians were injured in Gaza Sunday, including one critically, during clashes that broke out along the border with Israel. The clashes, as well as the firing of two rockets into southern Israel, occurred the day after thousands attended the funeral for Ibrahim Abu Thuraya, 29, a quadriplegic fisherman who was shot to death on Friday in the bloodiest day of the protests. To date, six Palestinians from Gaza have been killed since the Trump announcement.

Palestinian factions have called for protests to be held every Friday in both the Gaza Strip and the West Bank to oppose the action of the United States. In response, the Israeli military has conducted more than a dozen air strikes in Gaza.

Trump's action defied international agreements, including the 1947 U.N.-approved partition plan that recognized Jerusalem as an international city. Following the fighting that ensued in the wake of that decision, the western part of the city was seized by the Israelis and the eastern segment was governed by Jordan. Although Israel took full control of Jerusalem after its 1967 invasion, Arabs of all stripes, as well as most international organizations, continued to consider East Jerusalem the capital of a future state of Palestine.

As they poured into the streets during the past week, Palestinians made it clear they would not accept Trump’s decision. In Gaza, they were as outspoken as those in the Old City: "We will not give up on our capital," demonstrators yelled.

Mahmoud Qasim, one of the protestors at a march at the Square of the Unknown Soldier in Gaza City, said he is afraid Trump’s decision signals the end of Palestinians’ dream to have a state of their own.

“Today’s decision broke my heart! I can’t even comment on this. I just can say we’ve lost our soul. We lost Jerusalem,” he moaned.

“Does Trump really think he owns Jerusalem and can give it to the Israelis?” he fumed.

Although there were few female protestors at this particular demonstration since it was at night, one elderly woman could be seen in tears. She said her dream to eventually return to her old home in Haifa had gone up in smoke.

An older, angry man interrupted: “Where are the world leaders? Why are they not doing more than talking? Jerusalem is our capital. We will never recognize it as the capital of the Israeli occupation. I will die for it. I will die for it.”

Although virtually all other politicians have condemned the American decision for aggravating an already explosive conflict, with Palestinian president Mahmoud Abbas saying the U.S. has withdrawn its right to broker peace negotiations, many people on the street are skeptical. Abu-Mo`taz, another protestor, bitterly dismissed Arab and other world leaders, saying they have been silent for years and he doesn’t expect anything new from them.

“I believe the Arab leaders will do nothing but bemoan the suffering of Palestinian Muslims and Christians,” he says. “They’ll just talk.”

Others believe this action might actually shock some leaders into standing up, and could signal the start of a more forceful and effective rebellion.

“I believe this decision will move the dead souls of the Arab leaders who had neglected our case and force them to finally do something,” said Mohammed Abu Ma`rouf.