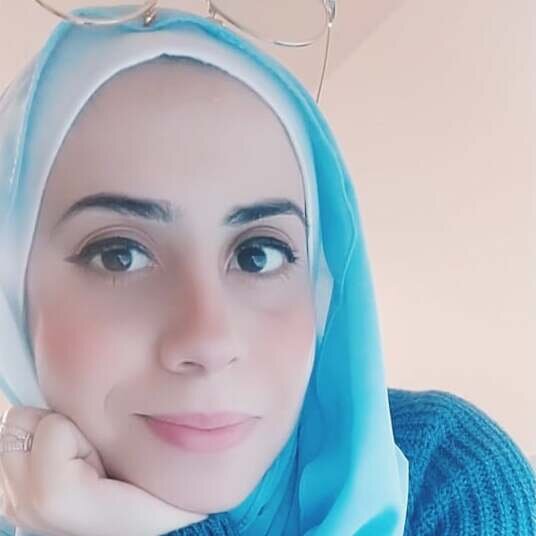 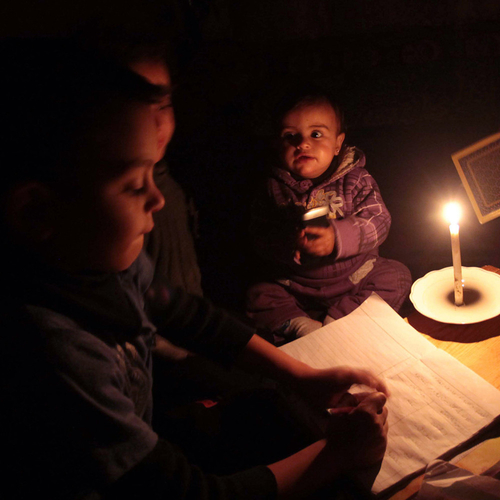 It’s winter time in Gaza, so go get your blanket and a big cup of cappuccino, turn on your heater and let’s watch a movie.

Wait, someone is knocking

It’s electricity saying bye bye—like it has repeatedly over the last several days, on for only about four hours a day and less in some areas of Gaza. There’s no real pattern right now; it just comes and goes.

So bye bye warmth, movie and joy. That’s okay; I have my cappuccino. Fortunately, we fuel our ovens with gas, not electricity, so I can still boil water.

It’s cold and dark and I’m bored. How do I entertain myself?

Watch a football [soccer] match, a fashion show or the news? No, there’s no TV. The power is off.

Visit some friends? But they will be very annoyed like me that all of their plans have had to be dropped, and we’d just complain to each other. Plus, most don’t have generators or fuel for them so we’d sit in the dark.

Play some sports? It’s freezing outside (and in), so no.

I got it; read a book? That’s it. Yes, I’ll read a book. It’s not very comfortable, but I can use the flashlight on my mobile phone.

Five hours later, the book is finished but still no power. (And for how many hours straight can one read anyway?)

My sister Rou, who is a “social mediaholic,” is complaining that she knows nothing about her friends outside the country. My brother Ali jokes that the funny thing about this crisis is that you can walk around wearing a half-ironed T-shirt and people will excuse you because they know the power went off in the middle.

Most others simply sleep a lot, or gather in the streets in front of a brazier for warmth. And those who live above the fifth floor of buildings with elevators are stuck. That’s a lot of stairs to expect an old person to climb down.

Power is the “mother of services”; if power stops, all other services stop. For example, we no longer put perishable food in the refrigerator because we fear it will spoil. Everyone feels the electricity crisis, from the little children to the elderly men. No one is spared, although a few have enough money to run a generator nonstop.

It’s been 10 years of pretty much nonstop electricity crisis, although it’s particularly bad right now. Every year, we have one or two months when we receive only three or four hours of electricity a day, and this month is one of them. (And then we return to the “good” days, when we get six or eight hours a day!)

Why is this happening? The official excuses fluctuate. It happens to be winter right now, so the bad weather is cited as one culprit. But there are three causes that are present all the time: the Israeli blockade, which restricts the amount of fuel and machinery parts we can import; past Israeli assaults, which have damaged our infrastructure; and our own internal political divisions.

“The crisis is political par excellence and the political parties must stay away from the Palestinian arena to ease the suffering of the citizens,” Jamal al-Dardasawy, spokesman for the Gaza Electricity Distribution Company, said in the media.

Gaza is supplied with electricity from three primary sources: Israel, Egypt and the Palestine Electric Company, which relies on both of those countries and the Palestinian political parties for its fuel. Conflict with or between any of those means a shortage of electricity for ordinary citizens. (Gaza’s only power plant was bombed in 2006. It began operating again at reduced capacity but stopped because of a tax dispute between Hamas and Fatah.)

Many officials, including Fatah member and Palestinian Authority President Mahmoud Abbas and Hamas member and Prime Minister Ismail Haniyeh, have promised that the latest and most extreme shortage will be solved soon. They are “working on it,” they say. But we’ve heard that before and are not holding our breath.

Actually, officials rarely bother talking about electricity these days because shortages have become the norm. When they do say something, Hamas officials blame Fatah officials and vice versa. No one comes up with a solution. No one can explain why we suddenly transition from eight hours of power a day to six or just four. It just happens.

And we have to keep on keeping on.

Some people can afford the cost of a back-up power generator. But most can’t, and instead many rely on candles. But you have to be very careful because if one candle drops, it can burn a whole house. In fact, three children died in Gaza that way in May.

Other people buy a unit that stores power while it’s on, but it needs a constant current for at least 10 hours a day—so that’s mostly useless. No matter what you do, you’ll have hours at a time with no power at all. Women usually use the daylight to order their children to do their homework, before the late afternoon when our houses become completely dark and there is not much to do except sleep.

But guess what? We have our own version of “rush hours” at odd hours of the day. It’s not when there is a traffic jam, but when electricity shows up without warning. Last Friday, for example, we finally got some electricity for two hours at 4 a.m.! So my mum woke up quickly to switch on the washing machine. Even though it was so noisy, the neighbors didn’t complain because they were awake too, baking, washing and charging their cellphones or laptops.

Sometimes, it becomes just too much to bear and people erupt into protests, like last January. Demonstrators protested against the continuous power cuts in several areas of the Gaza Strip, including camps like Bureij, Maghazi, Rafah and Khan Younis. But they ended up simply dispersing when the director of public relations and information for the Electricity Distribution Company insisted the severe shortage was due to the bad weather and there is nothing to do about Mother Nature. I’m not convinced though.

I don’t know or care who is responsible; what I know is that something ought to be done in order to solve it, before it reaches to a new high—which means no power at all.