Home » Disability is no barrier for true athletes

Disability is no barrier for true athletes

Disability is no barrier for true athletes 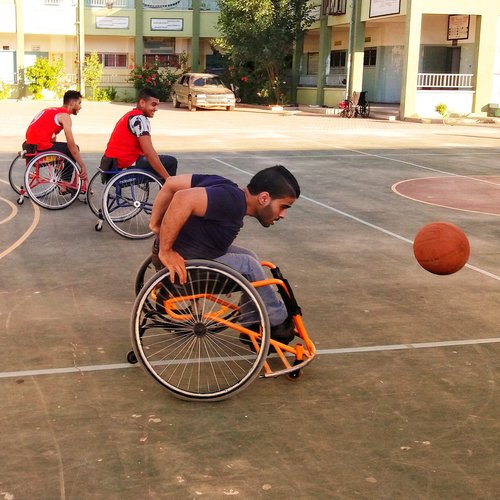 I was eager to meet the 20-year-old disabled athlete Ahmed Abu Namous when I heard about him from Eid Shaqoura, director of the al-Basma Club. Eid told me about Ahmed’s strong spirit and his fierce refusal to let his disability impede him from achieving his goals.

A term that means “smile” in Arabic, Al-Basma is a Palestinian nonprofit established in 2005 by Eid to bring parasports to Gaza. His mission: to develop the skills of people with disabilities and reintegrate them into all aspects of life—particularly sports and recreation. And with the number of amputees created by the violent Israeli response to Gaza's Great Return March at a staggering 54, his “business” is booming.

When I arrived at the school yard in Beit Lahia—a town in the far north of the Gaza Strip—I heard the coach whistle during a wheelchair-basketball match. One of the players, situated well in front of the basket, took two throws—with the ball sailing in successfully. The crowd erupted, whistling and applauding raucously. I realized it was him—Ahmed Abu Namous!

Ahmed’s right leg was amputated in 2013. He was just 15 at the time and thought he could slip through the fence that separates Gaza from Israel. When and some friends got too close, he was shot with an exploding bullet by an Israeli sniper. However, he lost his leg—not his love of sport or his determination to play.

His drive paid off: Ahmed was named best football (soccer) player in a 2017 competition for disabled people in Gaza and is working hard to become a professional [para]basketball player so he can participate in global contests in Turkey (assuming he is allowed to leave).

‘’Joining the al-Basma Club was a turning point in my life after my injury,’’ recalled Ahmed. ‘’I had little contact with the community until I found it. Watching other players deal with their hardships taught me a lesson about my own suffering. Now, I can compete even with normal players. Whenever I play basketball, I feel strong and free.’’

In addition to wheelchair basketball, al-Basma organizes competitions featuring volleyball, marathon wheelers, javelin throwing and swimming. Periodically, the players train with and even compete against nondisabled athletes, to better integrate them socially.

‘’Every detail of their daily life is a challenge,’’ said Eid Shaqoura. ‘’Our main goal of this club is to work with love and spirit. Disabled people shouldn’t feel ‘odd’ or like outcasts. We believe the best way to accelerate their rehabilitation is helping them integrate into society and make sure their voices and views are heard.’’

Mohammed Dahman is one of the basketball coaches and manages a team of five disabled players.

‘’These disabled players are learning fast. They have the capability to sharpen their skills and win many contests in the future. But our major challenge is a lack of equipment, courts and wheelchairs,’’ Dahman said. Recently the club asked the International Committee of the Red Cross to donate wheelchairs for more than 40 disabled girls.

Eid agreed. A lack of funding is the organization’s main obstacle, he said. ‘’International donor organizations want to contribute or finance food and clothes. But activities like sports are important too, to build self-esteem and pride.”

In addition to a shortage of proper equipment, the funding shortfall also means the club cannot accept more than its current 150 members.

Another challenge faced by the club and its members is the lack of electricity in Gaza. Currently, power is available an average of only four hours per day due to a shortage of fuel, making it difficult to hold night games or practices. However, an American NGO, Rebuilding Alliance, donated solar-powered lights to the al-Basma Club as part of the “It’s Time for Light” campaign. These “Light of Hope” (Nur al-Amal) solar lamps have been distributed in turn to each of its members by Al-Basma

"Now I can light my room when I return home and can give up using candles, which are dangerous because they can cause fires,’’ Ahmed said. “In a way, it’s a symbol. It’s a light of hope like the club has been for me.”