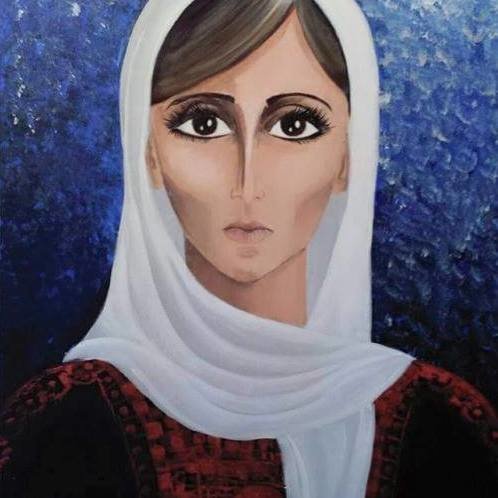 I desire a morning in Jerusalem,
in which I see the Dome of the Rock.
A morning in which I see Al-Aqsa Mosque
from the balcony of my room.
I desire to smell the aroma of freshly baked bread
from the bakery of Haj Saad,
and to see his grandson, Omar, running to him,
telling him that the news of Palestine’s independence
is still occupying the front page of newspapers.
Then, I will turn up the radio to listen to Fairuz singing,
“For you, beauty of all residence, rose of all cities,
oh, Jerusalem, Jerusalem, city of prayers, I do pray.”
I whisper, “Your prayers have been granted, 'Neighbor of Jerusalem'!”*
I pick up the newspaper
and see a picture of Handala with his face turned toward me.**
He is smiling.
His hand is raised with the peace sign,
with the Israeli flag underneath his feet.
Israel has fallen.
Palestine has risen.
I take a sip of my cup of tea;
I taste Jerusalem.
I taste Palestine,
I taste victory.
And I taste freedom.

* Neighbor of Jerusalem is the nickname for the widely admired Lebanese singer, Fairuz.
** Legend has it that the little refugee boy Handala, depicted in a famous comic strip created by Naji Al Ali, will never show his face until Palestine is free.