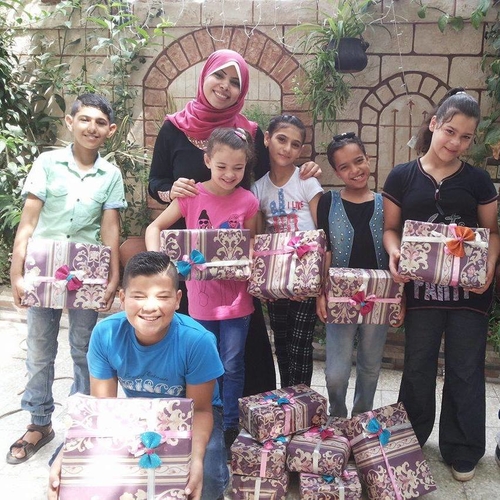 At 10 a.m. on the Monday prior to Eid (the Muslim religious holiday that marks the end of fasting during the month of Ramadan), the car from the Association of Peace and Love arrived. Putting our gift boxes in the back of the car, we piled in and headed out to meet our new friends in Beit Hanoun.

"We found other children of our age, waiting for us in the association. I was shy at first, but then we started to play some games and became friends," says my 10-year-old niece, Hala.

That was the ultimate goal, but I had thought it might be impossible to reach.

What was this trip all about? Let me introduce you to my little partners, my nephews and nieces—the best parts of my life.

I have a large extended family, including 21 nieces and nephews, aged 4-13. Although we are more than 10 years apart in age, we play, fight and talk. They always sneak into my room in the afternoons when my father is taking his nap. I let them in with a shhhh, but I know it’s a hopeless cause; they are children and will make noise. My father’s shouts follow shortly after.

What happens when we gather?  Nothing in particular, except chat about what happened during the day. They tell me their new ideas and share what they’ve invented. Sometimes we play games, or close all the curtains and doors and act out a play we dream up.

However, one day in March, we talked about something more serious: the plight of the many poor, needy people in Gaza. Feras,12, came up with an idea: "Why don’t we help them somehow?"

That idea was appealing to everyone, so we decided to set aside a box where we could deposit any extra money we had. Thirteen of my nieces and nephews participated, and the plan was to do something during Ramadan. They were very excited and started imagining ways to spend their money on good deeds.

When Ramadan began, the children kept asking me about their savings and how to spend it. It began to feel a lttle like a burden: First, I didn’t know any truly poor people. Secondly, I wanted the children to be involved in planning whatever we did, since it was their idea. But 13 "team members" is not an easy number to manage! A third problem was the plain fact that we had not managed to save a lot of money over the three months.

So, we held a meeting to discuss these challenges. Our main question was: How could everyone be involved, while at the same time do something that didn’t require a lot of money? We came up with a plan.

The next day, all of the children divided into groups: Some went to their families for more donations. Some collected empty boxes. The rest nagged their mothers to gather children’s clothing in good shape they no longer needed.

The clothes were packed into the boxes, and with the money they collected, we bought some new clothing, as well as toys, chocolate and balloons for Eid gifts. Everything was wrapped up like presents.

Meanwhile, I found the Association of Peace and Love, which was more than happy to help us and also provided transportation to its center.

We all sat on the floor of my room, turning it into a total mess as we packaged and wrapped. We fought, of course; some cried and some screamed. But we finally were done, alhamdulellah (thank God)!

"We know lots of children of our age can't afford to have new clothes for Eid. We want to share our clothes with them to make them feel as happy as we do," Fares, 13, said.

Sabah, Seba and Noran, all age 11, added, "We hope we can do this every year! We have lots of ideas for what else we can do."