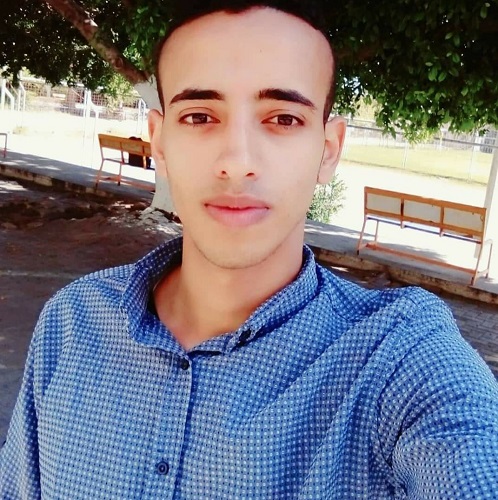 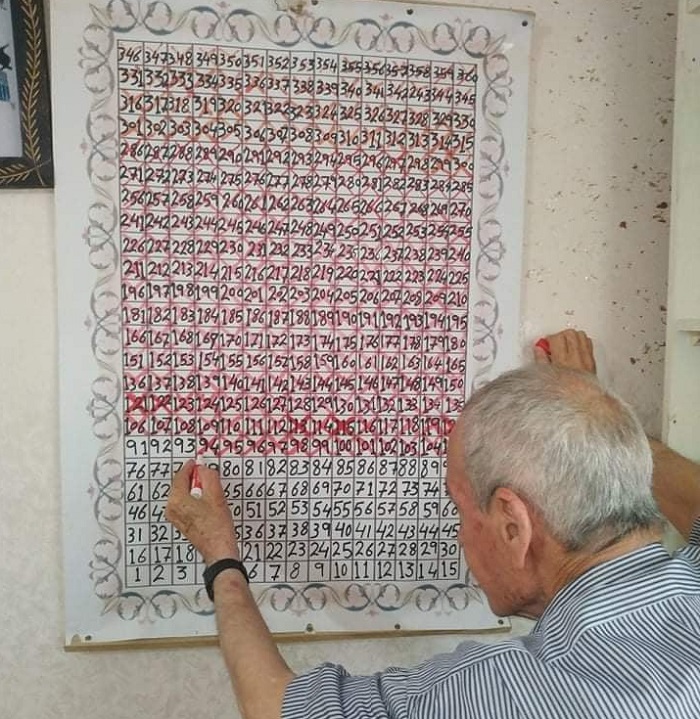 This story has been woven with threads of hope, though that hope is still locked inside a box. This old man has somehow managed to get hold of that hope, by creating a beautiful painting called the calendar of freedom, which makes the days quickly fall away—the days that separate those imprisoned inside the Israeli prisons and those outside—their families, sons and lovers.

Sameeh Qadan is 74 years old. He is a loving father to his sons, especially the youngest, who has held a special place in his heart ever since he was born, this son who was taken from him by the Israeli Occupation when the young man was just 27 years old.

But life gave this father something very great, which is hope. It is the thing that has made him able to continue on with his life without his son, whom he is rarely able to visit inside the prison.

A son grows up

The son is Abdul Raouf Qadan, who was born in November 6,1977. Since he was a child, Abdul loved sports and playing basketball in his local club. He spent most of his time there, and his father used to say he never saw his son at home because he was so attracted to sport, with his dream of becoming a professional basketball player running in his blood.

Abdul Raouf grew up quickly into his sense of responsibility, too. He was always checking on his family and helping family members with what they needed. At the same time, he was spending time with friends who like him were feeling responsibility to their people to stand up to what they were suffering from the Israeli occupation.

Abdul Raouf and his friends chose to speak out. Unfortunately, these acts of resistance didn’t last long, because the Israeli forces chased after them. The soldiers raided his parents’ house many times trying to find him there, and so he was forced to stay away and couldn’t go back, not even to see his parents. His family missed him so much, and he his family, especially in Ramadan at Iftar of every year.

Then Abdul took a big step in life—he got married. When his wife gave birth to his first and only child, Abdul missed being with his parents and siblings even more, and his desire for them to meet his wife and child became a needful thing.

At one point his father called him and said, “I wish you to be with us today at Iftar. It’s been a long time, and we want you today more than ever.” He agreed, and he decided to join them for Iftar.

He didn’t know that this would be his last Iftar. On November 8, 2004, on his way to his family’s house, he came upon Israeli soldiers at a checkpoint on the main road named Abu Holy at Salah Al din. He sat in his car wishing that the soldiers would not recognize him, but unfortunately, they did. They captured him, sent him to prison, and sentenced him to 16 years.

This was a big shock to his family. He sent letters telling them about his health and condition, and his parents managed to visit him after a month of his arrest. They were full of sadness to see him inside the prison. Abdul Raouf was very sad and desperate, like any human who has lost his freedom.

Abdul Raouf was making a new family inside the prison—other prisoners were taking care of him. However, for seven months he was subjected to many interrogations, during which he was tortured and beaten and subjected to psychological assault.

Meanwhile, his only son Sameer was growing up, and his wife decided to marry another man, because the situation was so difficult for her.

Abdul Raouf’s parents and son would visit him in prison when they could, and his mother, who had a special place in her heart for her youngest son, bought a lot of gifts and clothes that she planned to give him when he was released from prison.

Then came a time that was even harder for Abdul Raouf. His mother got sick. She couldn’t visit him for five years, and then she passed away. Her last and only wish was to see her son out of prison and to give him the gifts.

“We were hesitant to tell Abdul Raouf about his mother’s death,” his oldest brother Sameer said. “But the next morning we were surprised to receive a call from him, telling us that he already knew and he was calling to confirm that it was true.”

Nonetheless it was very hard for Abdul Raouf to accept his mother’s death. By being in prison he couldn’t see his mother for the last time or even attend the burial.

Abdul Raouf is in Nafha Prison, which is located in the Negev, which is the largest desert in Palestine and suffers from extreme hot and cold climates. It is considered one of the harshest and most severe of the occupation prisons. He is taking some classwork there. He already has two bachelor’s degrees, the first one in history at Al Aqsa University (history was his favorite subject at school) and the second one in sociology from Al-Quds Open University. He also has completed scientific courses in media and human rights.

Counting down to release

On the outside, his father Sameeh wasn’t losing hope, despite the sadness of seeing his wife pass away without her being able to make her biggest wish come true. He was afraid of having the same destiny as his wife. He determined to do something to help him retain hope in his heart, and so he made a calendar. When it was a year to his son’s release, he drew each number, 1 to 365, in small boxes on a big piece of paper. “Every morning, when I cross off a number, I feel very happy,” he said. “This helps me to gain a lot of strength until the day of release.”

He hopes to be alive when that happens, to make his wife’s wish come true. He also hopes to have a big ceremony and find a new wife for Abdul Raouf so that his son can start a normal life again. Sameeh is now full of happiness because his son’s release is about to come, and he will be able to spend time with him again like the old days with an absolute comfort.