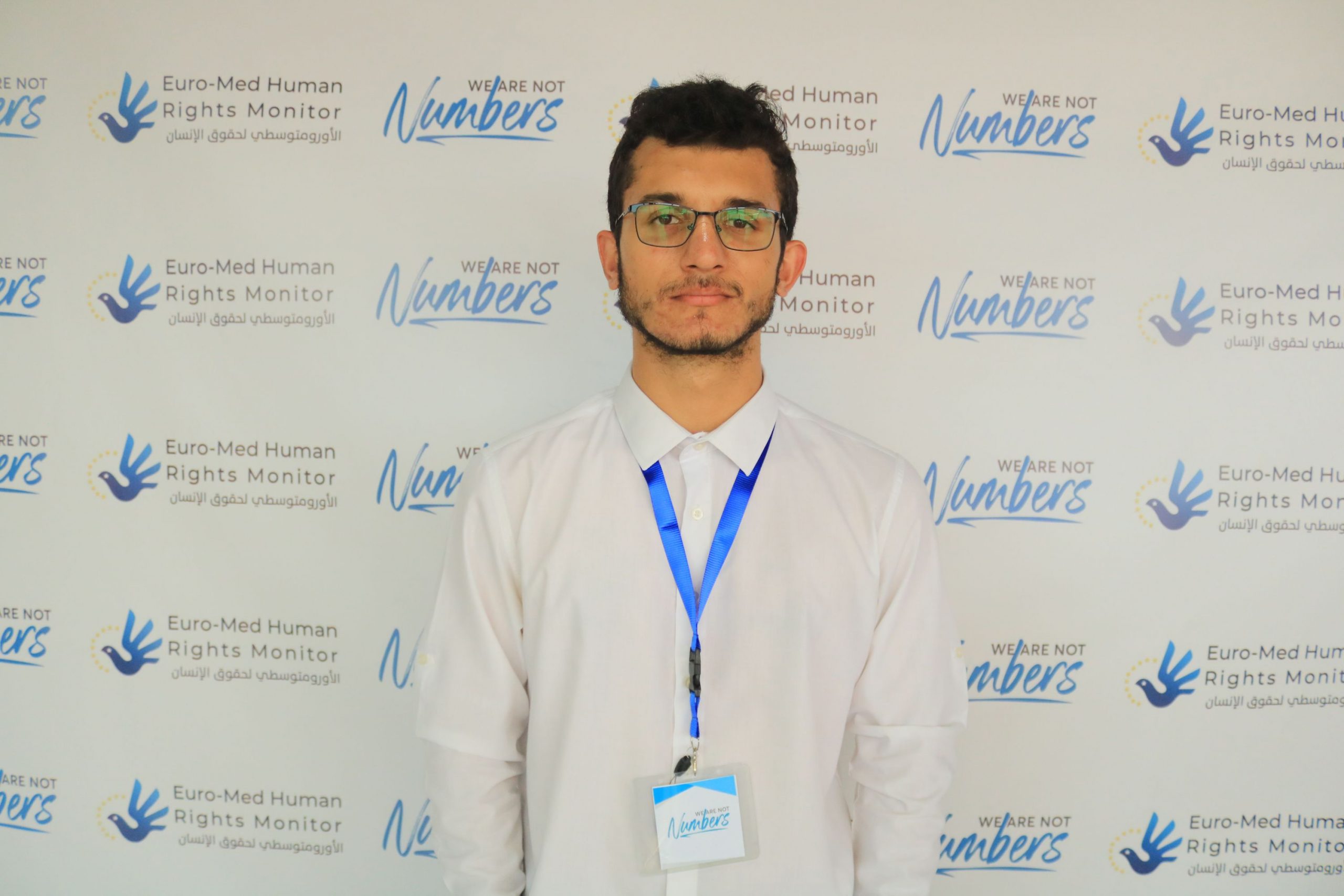 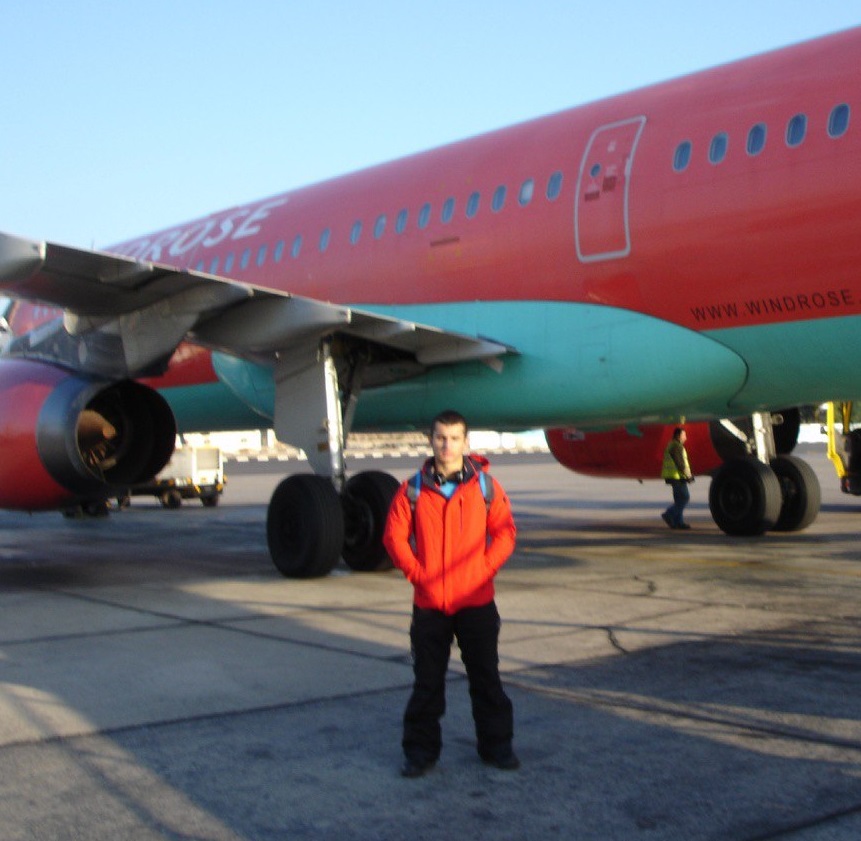 It is not easy to travel from Gaza. We have a saying, “Once you are in, you won’t get out.” In Gaza, it’s difficult for any student to win an international scholarship, but that’s a piece of cake compared to finding a way to exit the Strip to take advantage of it. Traveling out of Gaza is like chasing a phantom. We often hear stories of people making it to the borders, only to be sent back.

But I was fortunate as a Gazan to have a Ukrainian passport, as do my mother and grandmother, who are both Ukrainian born. And so I figured that the travel barriers wouldn’t be a problem for us. My Ukrainian passport has superpowers compared to the Palestinian ID card that I also hold.

It was 2018 when my mother and I decided to accompany my grandmother, whom we call Babushka, back to her home in Ukraine, after a visit here. (The visit was shorter than the three months it took to get approval for her to enter Gaza, but that’s a different story.) I could also use the trip back to Ukraine to ­­renew my Ukrainian passport. We registered our names with the Palestinian authorities for permission to exit, packed our luggage and … waited three months.

The wait for the travel lists dominated every gathering: early morning, mealtimes, evening activities, and nighttime conversations. We worried about it at our summer chalet by the sea, as we slept on the rooftops during the summer, and during my sixteenth birthday party. Gazans who seemed to know told us that medical patients and scholars have priority, but our time would surely come, and so soon.

A week later, we began our adventure. Holding pieces of hope in our luggage, we encountered the first barrier: Rafah Border Crossing, which separates the Gaza Strip from Egypt. In a nightmarishly overcrowded hall, we waited for what felt like eternity for our names to be announced, which meant that we could leave the hall and exit Gaza. We waited minute after minute, hour after hour.

If God had commanded a hell on earth, it had to be, unquestionably, this suffocating hall. Travelers slept on the floor waiting for their name to be called. The irksome mosquitoes, which were definitely recruited by the Egyptian army, ruined our sleep. The electricity was intermittent. But the worst of it was the smelly, unclean bathrooms. To enter them, we took deep breaths and pushed ourselves inside. To this day, Babushka still wonders if the smell in hell is as is in those bathrooms.

A new darkness started to chase us: would we be denied entry into Egypt and be sent back to Gaza? But after a day and a half of this purgatory, we finally reached the top of the list, our names were announced, our bags received one final inspection, and we were able to exit the border area and enter Egypt.

We packed our bags again. Babushka wept with joy but I wept with worry.

Our next challenge was to reach the famous coastal city, Sharm El-Sheikh, on the southern tip of the Sinai Peninsula. Babushka had been there in her youth and she told me that in Sharm El-Sheikh, the sea would be different from Gaza’s — totally different atmosphere and color. I was overjoyed and eager to get there.

There were many checkpoints, and our luggage — as well as the taxi driver — were searched 15 times from start to finish. The taxi finally reached the resort town. I was no longer Khaled, the 16-year-old boy, but I was Khaled, the man in charge! Wanting to be responsible and chivalrous, I loaded my arms with all six pieces of luggage for my mother, grandmother, and myself single-handedly as we headed on foot toward our hotel.

The atmosphere was very festive. Children were playing and there were all sorts of music coming from shops and street sellers. I rushed out of the terminal to gaze at the sea, juggling the luggage with all my strength. But the music suddenly faded at the question, “Can I see your passport, sir?” I turned around; it was an Egyptian officer, confronting me there on the sidewalk.

I promptly took out my blue Ukrainian passport — with my green Palestinian identity card attached. All the politeness of the Egyptian officer vanished as he saw this unfortunate green evidence that I was Gazan. He curtly yelled at me, commanding me to drop my six pieces of luggage in order to search them. My hands trembling, I obeyed.

Babushka rushed over and started speaking in Ukrainian. The Egyptian officer was taken by surprise. He had assumed I was only a Gazan. For a few seconds, I could see the look of disappointment in his eyes that he could not kick me around. Once he understood I was Ukrainian, he had to let me go. My grandmother had saved me. The confrontation upset me so much that I never went to the sea that day.

The next day we went to the airport to catch our flight to Ukraine. But as if all that had happened weren’t enough, an airport agent forbade us to board our booked flight. “You have come to Sharm El-Sheikh from Gaza,” he informed us. “People who come from there are suspected of smuggling explosive materials, so you have to go back to where you came.” Babushka had never faced such harshness. She burst into tears and so did I.

No one knows my dear mother better than me. She — who has always been so gentle, so sensitive, and so caring — did not show her emotions. A coldness captured her face. This was not new to her; she had traveled from Gaza to Ukraine and back many times before and knew that such mistreatment occurs. She was as still as a statue. In that moment, if the ground had opened up and swallowed me, it would have been less painful than seeing my mother and grandmother suffering this indignity. At that moment, I vowed that if they would let us out, I would never ever come back to Gaza. It is a prison, even after you have left it.

We waited desperately in the airport, afraid we would miss our flight. Babushka had begun to bite her nails to the skin, but she was resilient. It was only after a lot of anxious pleading to the highest officials of the airport where we finally allowed to continue our journey.

Most international travelers would not have had any of these problems, but the Palestinian does. As a young boy, I did not know that there was such suspicion of us. Even worse, it came from our own flesh and blood, the Egyptians, and this made me sad.

I had vowed never to return, but my father commanded me to come home, and so I did. But I came back with the realization that having dual nationalities, Ukrainian and Palestinian, can be a blessing but for me, but it isn’t enough.

It is not easy to be half Ukrainian and half Palestinian, to debate whether you are this or that. I keep asking myself which occupation am I fighting: the Russian, the Israelis, or both? I have decided I am just a human. I have two nationalities, but I don’t want any nationality; I want to travel, as it is my right as a human.