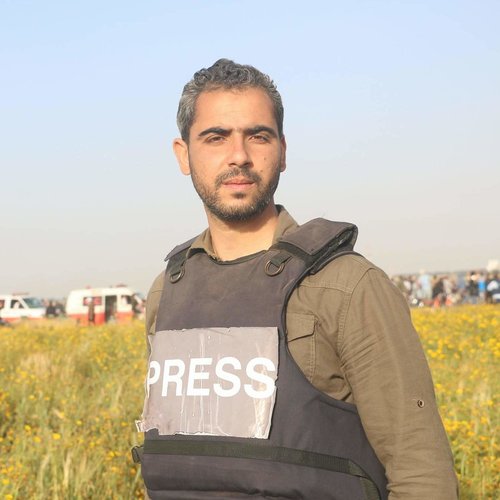 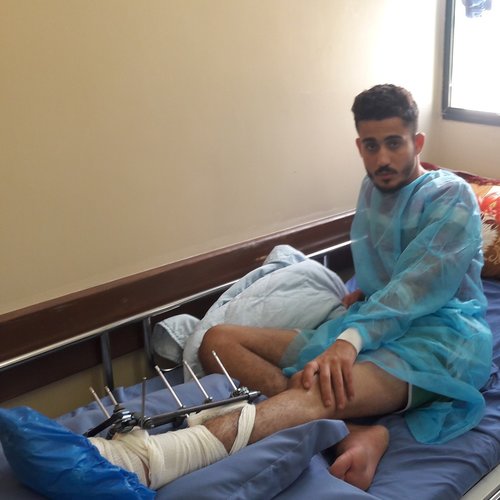 Fouad Abu Libda, 23, has been confined for six weeks to an isolation room at Gaza’s Dar El Salam’s Hospital, in the southern city of Khan Younis. Only when he dons a gown and mask can he leave his cubicle, so afraid are his doctors that he will be assailed by a germ that will take down his already-compromised immune system.

“I feel like I am in prison; every move I make is monitored,” says Abu Libda. “All I hear is, ‘do not move, do not touch this before we sterilize it.’ And when my family visits me, doctors make everyone wear and gowns and gloves. I feel like a pariah.”

Abu Libda was shot by an Israeli sniper on July 12, when he tried to rescue a wounded child in the Friday Great Return March protests by the border. The explosive bullet shattered the bones in his left leg, and now, a chronic infection has set in—a phenomenon all too common for the doctors who work for Doctors Without Borders (Medecins sans Frontieres, or MSF).

According to the Palestinian Health Ministry in Gaza, over 1,200 people who have been shot in the lower limbs while protesting in the weekly demonstrations now require specialized medical treatment, including around 600 who have contracted serious bone infections (osteomyelitis).

“We cannot deal with this high number of cases,” says the MSF’s Mohamed Abu Mghasib. “There is a serious shortage of isolation chambers, which means we can take just 17 at a time. And every patient diagnosed with bone infection needs to stay at least six weeks. About 200 are on a waiting list right now. They likely will lose their legs.”

Of the more than 10,500 protesters treated at hospitals and field clinics in Gaza since the weekly protests launched March 30, 2018, roughly 60 percent have been struck in the lower limbs, according to Gaza's Health Ministry. At least 5,800 of those casualties were hit by live ammunition; others have been hit by rubber-coated metal bullets and tear gas canisters.

Infection sets in when a dirty, foreign body like a bullet breaks through the skin and bones. Because the injuries often stay exposed to the environment for a long time before they are properly treated, the risk of infection is high.

“These infections also are often resistant to the antibiotics commonly used,” says Abu Mghasib. “Most of the patients we receive require up to three types of antibiotics a day.” The challenge is that alternative antibiotics are more expensive and cause onerous side-effects.

For example, Fouad’s liver enzymes now have shot up due to the large dose of antibiotics, and now, he faces potentially weeks more in isolation.

In the room next to Fouad is Abdullah Jindia, 12. He was shot with two bullets on September 6, also while participating in the Great Return March. One bullet penetrated his left leg and a second hit right, causing a fracture and a shortage in that leg of 15 cm (6 inches). He, too, developed a chronic bone infection and has been in an isolation for four days.

“A child cannot stay in one room for six weeks, says Amar Jindia, Abdullah’s father. “Because he is so young, the doctors have allowed me to join him. I am trying my best to encourage my son as he endures this long period alone. We play games together and I brought his schoolbooks.”

Dina Nasser, lead infection control nurse at Augusta Victoria hospital in East Jerusalem who has also worked in Gaza, told the Bureau of Investigative Journalism, “This is a global health security issue because multi-drug resistant organisms don’t know any boundaries. That’s why the global community, even if it's not interested in the politics of Gaza, should be interested in this.”

Healthy people can carry the bacteria without showing any symptoms, so doctors and aid workers traveling in and out of Gaza could carry these superbugs to other countries. Dr. Ghassan Abu Sittah, who studies conflict medicine at the American University of Beirut Medical Center and traveled to Gaza in May, told the bureau, “The untreated sewage from Gaza containing multi-drug resistant bacteria goes into the aquifer," which also supplies Egypt and Israel.

All the “superbugs” on the World Health Organization’s list of priority bacteria – those which pose the greatest threat to human health – have been reported in Palestine.

The challenges are even more life-threatening when no medications at all are available. The Palestinian Health Ministry reports a 40-50% shortage of medicines in Gaza due to the Israeli blockade. Moreover, these patients need multiple reconstructive surgeries after infection is controlled. Some patients have required more than 30 operations. But Gaza’s hospitals are short on operating rooms and properly trained specialists.

“Unfortunately, the number of specialist doctors who can perform these surgeries does not exceed the number of fingers on my hand,” says Abu Mghasib. “We have been able to transfer 15 complicated cases to the MSF hospital in Jordan, but there are more than 600 needing this advanced care.”

One positive development is that, in coordination with Gaza’s health ministry, MSF has set up the first and only laboratory in the strip in order capable of analysing bone samples for infection.

"This process allows us to know which antibiotics will work. We take three to five bones samples from every patient. But the capacity of this laboratory is just 100 samples a month," explains Abu Mghasib.  “Bone infection has become an epidemic in Gaza.”

Originally published by The New Arab.