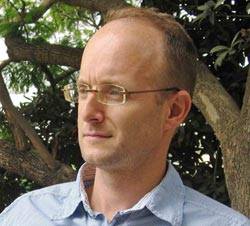 Jonathan Cook is a British journalist who as lived Nazareth, Israel, since 2001. Jonathan is the only foreign correspondent to be based in Nazareth, the capital of the Palestinian minority in Israel. “From Nazareth, things look very different,” he explains. “There are striking, and disturbing, similarities between the experiences of Palestinians inside Israel and those inside the West Bank and Gaza. These unifying themes suggest that the conflict is less about the specific circumstances thrown up by the 1967 war and more about the central tenets of Zionism as expressed in the war of 1948 that founded Israel and the war of 1967 that breathed new life into its settler colonial agenda.” Jonathan is the author of three books on the Israeli-Palestinian conflict: “Blood and Religion: The Unmasking of the Jewish State” (2006), “Israel and the Clash of Civilizations: Iraq, Iran and the Plan to Remake the Middle East” (2008) and “Disappearing Palestine: Israel’s Experiments in Human Despair” (2008). In 2011, Jonathan was awarded the Martha Gellhorn Special Prize for Journalism. You can follow him on Twitter (@Jonathan_K_Cook), and his blog and his writings on his website.