Home » A day of protest in Gaza 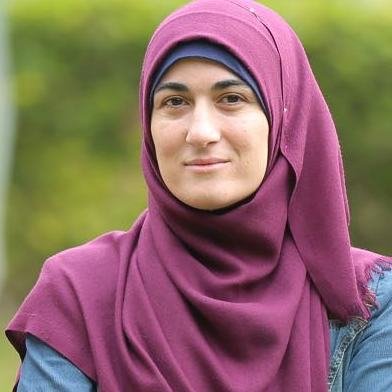 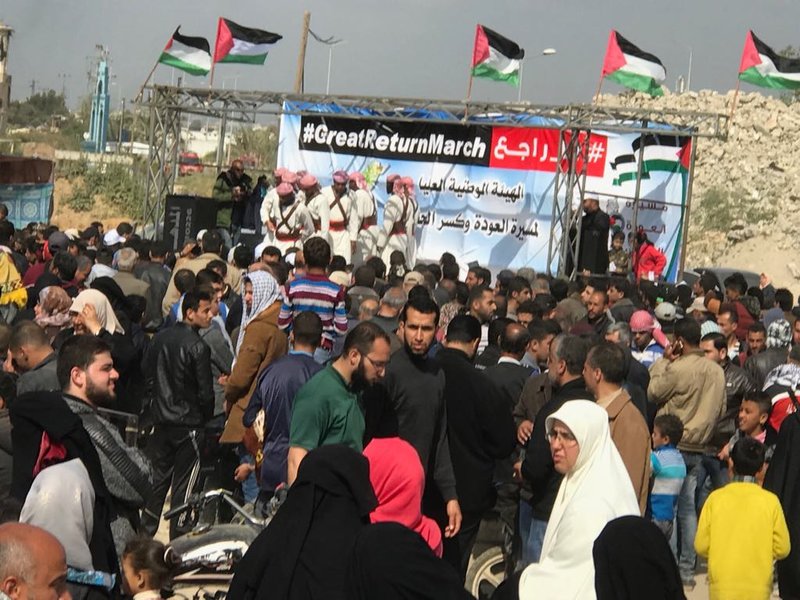 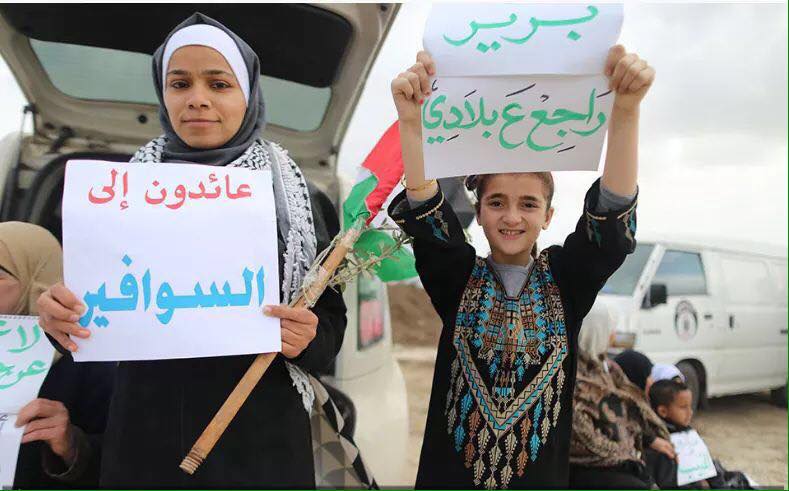 Their signs each say "We are returning" and then the town in occupied Palestine where their families originated. 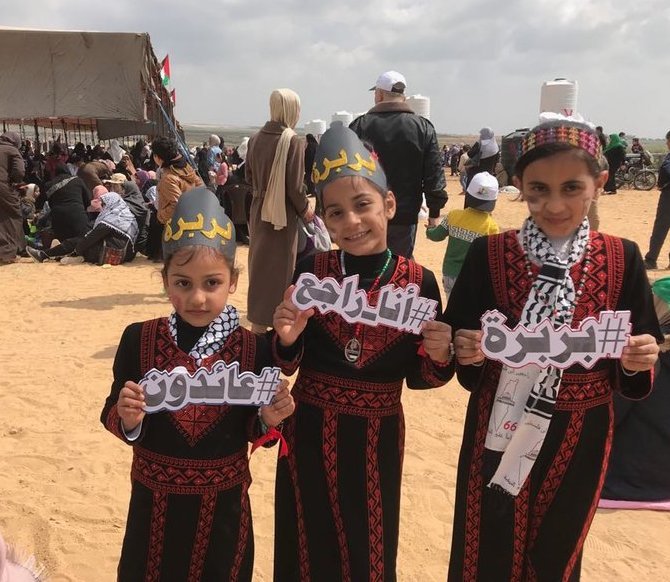 Collectively, their signs say they will return to their ancestral town of Barbarah. 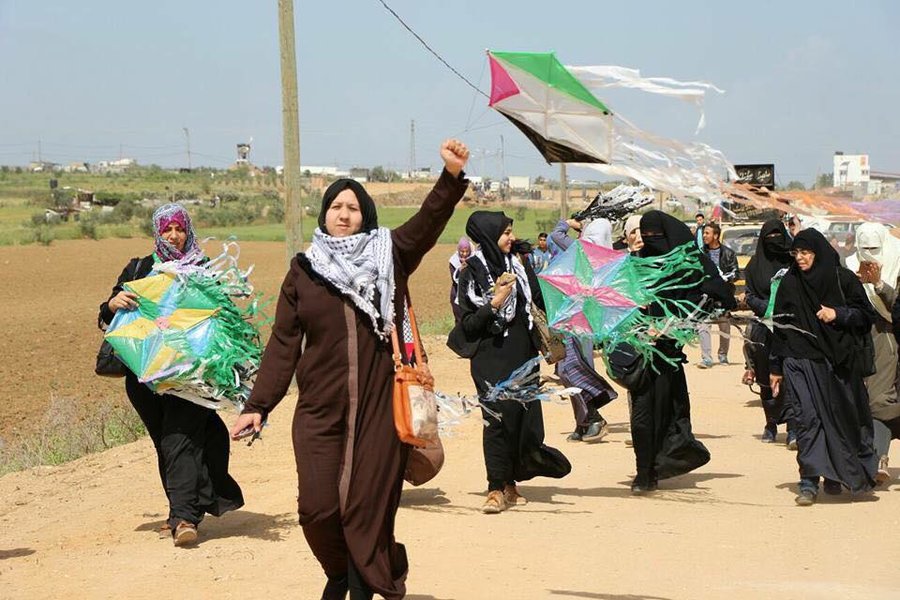 Many protesters, who came in peace, flew kites in celebration of the day. 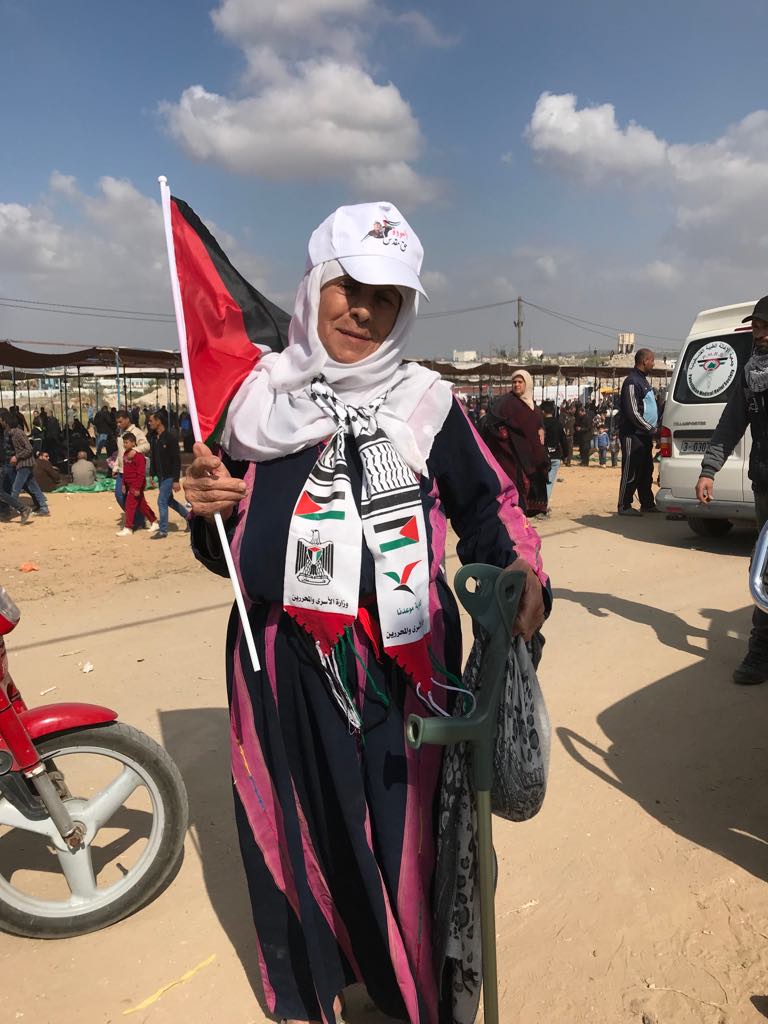 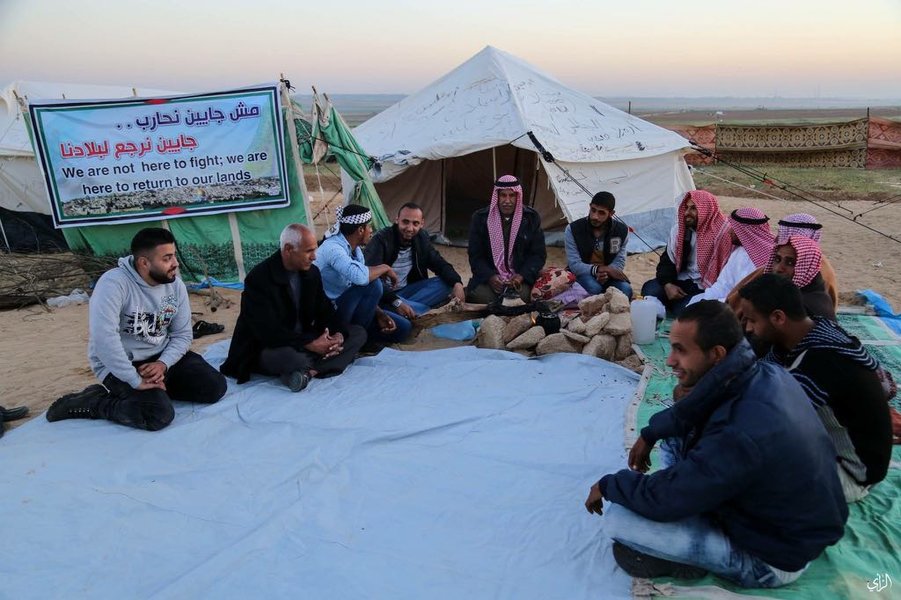 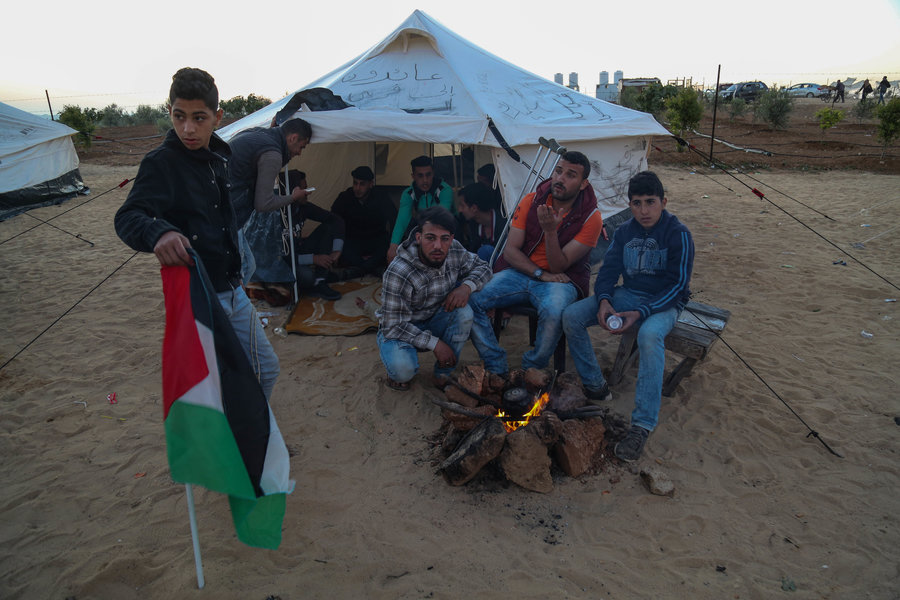 The march has become a social event (photo by Atia Darwish) 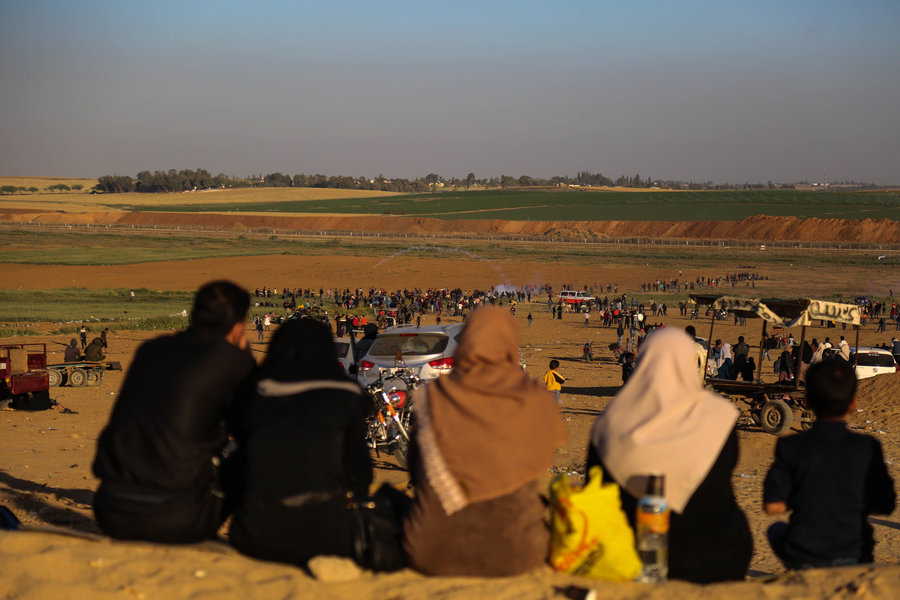 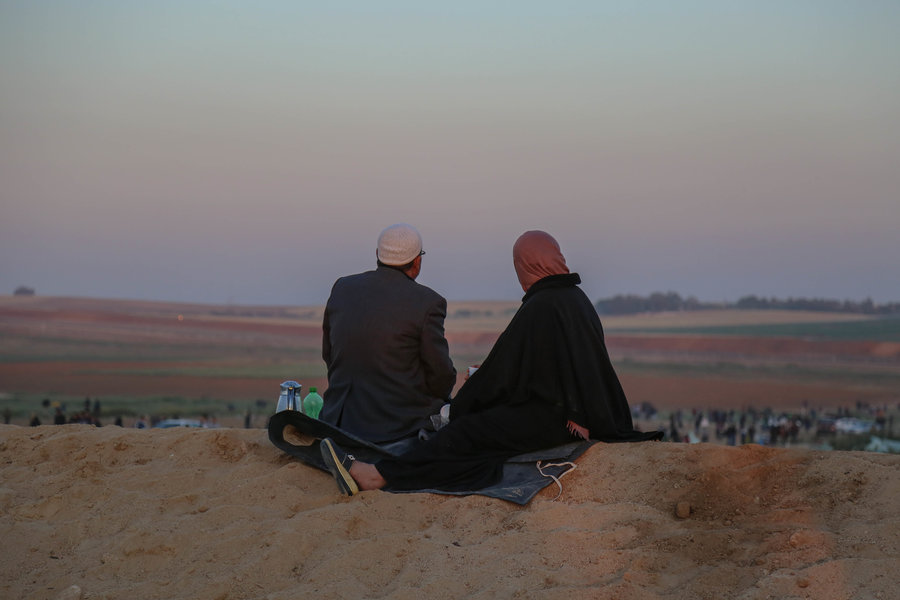 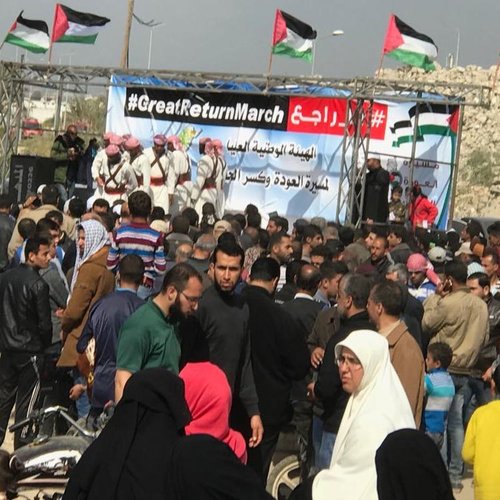 On Land Day, March 30, I set out with my three, 12-year-old children, husband and other family members to join an estimated 60,000 other Gazan Palestinians for the first day of the Great Return March by the border with occupied Palestine [Israel]. Each day until May 15, the anniversary of the Nakba [“catastrophe” when more than 750,000 Palestinians were forced from their homeland to create Israel] we will camp by the border to remind the world that we have a right to return home.

It took me 45 minutes to get to the eastern border of Gaza City. We passed through the densely populated neighborhood of al-Shijaea, where a terrible massacre took place during the 2014 Israeli war on Gaza. The streets were congested with Friday morning vendors whose faces reflected the miseries and toils of Gaza life. Mule- and horse-pulled carts dominated al-Mansoura Street as I rode in the car; I realized I had actually never been to that part of the city before!

When we reached the Israeli border area, tents and seating areas places where people were to sit were placed about 700 meters from the fence that separates Gaza from the rest of occupied Palestine. My eyes beheld a heavenly scene of a vast, green area on the other side of my country. (The area now known as Israel has plenty of water, unlike Gaza!) My heart raced and pounded in the same way it had when I went to Jerusalem in 2000 and visited al-Aqsa Mosque. I wanted to run to that oasis and touch the isolated and prohibited area of my homeland. A sudden rush of adrenaline filled my body.

Families sat on the ground with their kids, who wore the national Palestinian dress or camouflage uniforms. When I asked them to pose for a picture, each kid held up the name of the town his/her family originally came from and a sign that read, “We will return.” For a fanciful moment, I imagined that today was actually the day of return. All of the people gathered there greeted each other with, “Inshallah, we will all return.” Gaza happens to be my native homeland, but I was envious, so I said to my friends there: “I’m going back, too. All of Palestine is my country.”

I pointed to the closed border area, where the barbed fence and armed watchtowers were located, and said to my kids with a half-cracked voice, “See, that is Palestine. See how beautiful it is.” As the sirens of ambulances intermingled with the vociferous speeches and national songs, I realized there would always be martyrs. As long as Palestine is not free, and as long as we are locked up in the big cage that is Gaza and denied the right to live like other ordinary humans around the world, there will always be young people willing to sacrifice their lives for the sake of the sacred soil of Palestine.

At that moment, we were all one. Everyone there was united under one flag and one motto: We have a right to return to Palestinians’ historic homeland. This overwhelming feeling of unity long has been missing, especially in Gaza. As I pondered the faces of my people there with me, one fact was clear to me more than ever: None of us had anything more valuable to lose than what we already had—our home.

The fearless ones, mostly young men, ventured close to the border even though they were not armed—they couldn’t resist getting a closer glimpse of their occupied homeland. They were as vulnerable as us women and posed no threat. Yet as they had threatened, Israeli snipers were positioned to kill these dreamers. The Israeli occupation forces also threw teargas canisters at the crowds.

The toll at the end of the day was 16 martyrs and more than 1,500 wounded. But being a Palestinian and standing up for our rights has meant sacrifice since our first displacement in 1948. My family and I will not back down. 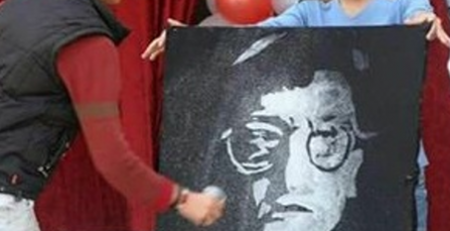