A Love Letter to my Mom

Home » A Love Letter to my Mom 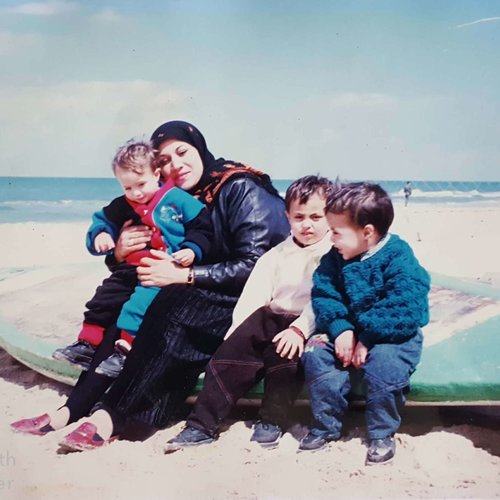 For my mother, on Mother's Day.

Life is often very hard. Everything can change in a moment. Every dream can vanish in the blink of an eye, leading our path in life to change dramatically. My mother’s life is an example.

My mother, Ibtisam, has proven to me and the whole world that women can do what even many men can’t. Despite the harsh challenges she has faced, she can transform (metaphorically) any drab, black-and-white scene into a textured, colorful tableau. She has taught me how to look for beauty in everything I see, making my life in Gaza bearable. Here is her story:

Although my mother was the middle daughter in her family, she was regarded as uniquely special, especially by her father. It’s easy to understand why: She was a hard-working student and routinely earned the highest marks in her classes. Her favorite two subjects were math, in which she majored at university, and English. Meanwhile, she willingly and without complaint helped with whatever needed doing at home, including cleaning the house, cooking and buying groceries. My mother once told me my grandma would send her a far distance to bring lunch to the workers building their new house.

Upon graduation from high school, she enrolled in the Department of Math and Physics at the Islamic University of Gaza. IUG was still new at that time and not even completely finished; students studied in tents and caravans. It was hard to bear the hot weather in the summer and the cold in the winter, but my mother recalls that books, learning in general and especially solving math problems every day were all that she really needed.

My mom laughs when she tells me that many men wanted to marry her; she attributes the attraction to her big, wide, brown eyes. But she refused the marriage proposals so she could focus on her studies. She always tells me education comes first, because our survival as well as our dreams depend on it. With education, we can find a job and earn a living. We also broaden our knowledge so we can engage with the world.

Unfortunately, waiting didn’t protect her from an unlucky choice. A few years after her graduation, she agreed to marry my father, who never was a decent husband. She suffered for three and a half years, living with my father and his family in what she calls “that ominous” house. She rarely says much else about those pre-divorce years, but I know enough to realize we were better off without him, even though that meant growing up without a father.

My mother left that cursed house with three infants. My oldest brother was two years old, my other brother was 1 and I was almost two months old. Despite my mother’s suffering (she didn’t want the divorce even though she was terribly unhappy, and—on top of that—divorce is not accepted easily in Gaza’s conservative society), she focused on us. She never re-married; instead, she sacrificed everything to make a better and a bright future for us. We were her first priority—and it was a challenge. I became very ill early on and almost died.

I sometimes tell my mother I wish she had not married my father so she could have been spared the pain. But every time I tell her that, she replies with a smile that she is glad she married my father because she gave birth to her three “angels,” as she always describes us.

Fortunately, my mother was strengthened by her faith in God, a powerful personality and the help of her brothers. She got a job as a math teacher in a government school and later was promoted to supervisor for mathematics in the Directorate of Education in East Gaza. She was recognized first as best teacher and then best academic supervisor.

My super mother is everything—father, mother, sister, teacher and best friend. She helped me become the positive, passionate dreamer I am today. She always tells me God has a plan and everything happens for a reason. But she knows how hard life can be: When people tease me, she helps me learn to ignore them. She always encourages me to keep learning: Once, she paid almost $1,000 so I could take 10 courses to learn English, and although money was so very tight, she paid my school and university fees and expenses. She modeled the ideal of continual learning too; she went back to school herself and got a master’s degree in algebra.

After we lived for 17 years in my mother’s family’s building, she used her hard-earned money plus a loan to build a cozy house of our own on land she bought in 2004. She owed $20,000 as a result and worked so hard to pay it back. In addition to her regular job, my mom worked as a math tutor for more than three years and as a part-time Mathematics lecturer at local universities for several years. I cannot forget her tired voice and strained eyes after teaching lessons all day and checking exams all night as well as doing chores which I always help her with.

I will always remember how proud my mother was when I received a scholarship to study in the USA and then completed university with academic excellence. She had always encouraged me to be open to other cultures and make friends from across the globe, and although most people her age in Gaza don't know English, she is fluent. But while I knew my mother wanted me to go abroad to learn more about life, my absence was difficult for her. She told me she scarcely entered my room when I was gone because she didn’t want to see my bed empty.

I always fear the day of losing her, but she needn’t worry. I may leave her in body over the years, but I will always be with her in spirit.