When a sea becomes a lake: the prison that is Gaza

Home » When a sea becomes a lake: the prison that is Gaza 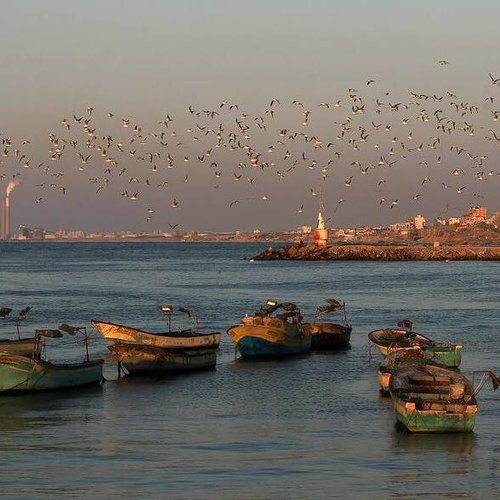 From time to time, I head to the Gaza sea, where I can breathe some fresh air and have a little chat with the blue expanse. We talk in a deep, silent language that nobody understands but me and the sea. Whenever I go there, I usually take my little tea thermos and my phone, so I can play music. The natural music of the sea is low when the waves are calm, and so I play my own, sad and relaxing tunes—often Arabic or Sufi Turkish songs. I love to listen to Sufi Turkish music because it takes me to another, spiritual world where I find peace and tranquility.

Sometimes I go to the sea with friends, but most frequently I prefer to go alone. The sea is my soulmate and the place where I release my stress, share my dreams and even weep freely. I sit with my back turned to Gaza, on a rock opposite of the beautiful Bridge of Ashdod, where I can see the bright lights that so rarely glimmer in my city. I don’t want to see the mourning that is ever present in Gaza: the dim light, dingy buildings and faces with smiles that don’t reach their eyes or hearts. We are all somewhat dead inside.

At the sea, I try to convince myself that I am not in Gaza, but somewhere else on the Mediterranean—maybe in Mykonos, Greece. I always dream BIG.

I feel fortunate my house is just a short walk from the beach, but sometimes I go further to the Gaza port (el-mineh). People refer to it as a port, but it is not a real port anymore. Prior to World War I, it was busy and thriving. But then the Ottoman era ended and then later, Israel imposed its blockade on Gaza (now joined by Egypt). Visitors see a few rusty, archaic ships from the earlier days, but now the only boats that sail in those waters are those of fishermen who are allowed to go just six miles out.

Still, the Gaza sea has always been my escape, an oasis of beauty. But one day I realized it, too, has its limits.

One day, I headed to el-mineh with two of my friends. Once we found place with a good view, we sat and stared at the beauty of the sea before us. The glassy surface was very calm and a deep blue. But for some reason and for the first time, the water before me looked very confined, deeply unsettling me. I felt as if I was viewing a lake, not a sea. I knew the sea is not open to the outside world. For all practical purposes, it ends where the Israeli Navy’s warships lurk, ready to shoot at any boat that attempts to go out too far or even to sail in to visit us. Even the tranquil blue of its water is deceiving—mixed as it is with the blood of Palestinian fishermen and those brave international activists who died at the hands of the Israelis in their attempt to visit Gaza. And then there are the toxic pollutants that pour into it every day because the blockade makes it impossible to have a functioning waste-treatment system.

My friends were chitchatting, but my own thoughts drowned them out. I imagined where those waters could take me if only I could sail them freely. North would take me to Turkey or Cyprus, west would lead me to Tunisia, Italy or even Spain and to the south is Egypt. But then an insidious, sarcastic voice in my head interrupted. It said, “This so-called sea will take you nowhere. You can go nowhere, Ali! Have you lost your mind? Look around. This is not even a sea; it’s a LAKE. It’s a three- to six-mile lake, with its limits changing at Israel’s whim. It never gets wider, just narrower.”

When I turned away from the sea to look at my home, Gaza City, I asked in confusion, “What has happened? Why does your sea feel and look like a lake?” Gaza replied, “It was a sea, Ali. It was, but not anymore.”

I wasn't shocked by the city's answer, although I had long been deceived by its spectacular view. Yes, Gaza looks beautiful, especially in photos, but its beauty is fake—often helped by the inventive filters used by photographers. Gaza seems strong and steadfast in photos, but in reality, it is so very vulnerable. The lack of fresh water, of medicine, of electricity, of jobs that pay sustainable salaries, of construction materials, of good-quality goods—of LIFE is eating away at its soul, our souls. Gaza is at death’s door.

Then I glimpsed a group of seagulls flying over the fishermen's small, dusty boats. The existence of seagulls proved it is still a sea in its “heart”—although their calls sounded like screaming, as if pleading for help. It’s like they are imprisoned just as Gazans are, despite the fact that they have wings and can travel, unlike us. We all want to be free like seagulls should be, traveling whenever and wherever, without the need for a permit.