What the Great Return March means to me

Home » What the Great Return March means to me 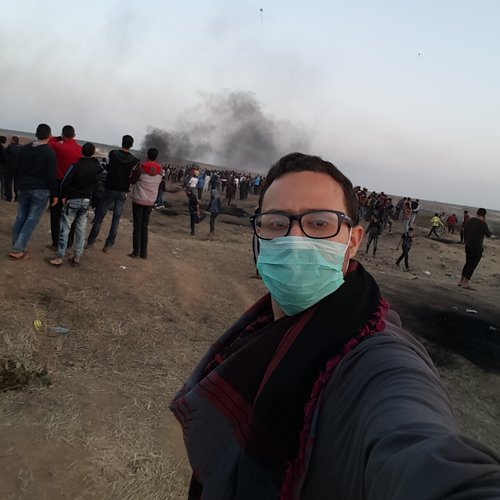 People outside of Palestine probably have the impression that all Palestinians or maybe all Gazans are fighters or rebels—protesting constantly in one way or another. But that’s not the case. Many of the 2 million residents of Gaza are too exhausted by the struggle to support their families or afraid of lethal violence to participate in activities like the Great Return March that launched along our border with Israel March 30.

As for me, in the past I stayed home from demonstrations—mainly due to my general distrust of the political infighting and strong-arm tactics that typically dominate our attempts to protest here. A lot of the youth here feel the same way.

But I have concluded that the Great Return March is different and worthy of participation. It is designed to remind the world of our internationally guaranteed right to return to the ancestral lands from which our families were evicted in 1948, as well as to demand the lifting of the illegal, 12-year Israeli blockade. The idea for the event came from an ordinary resident, not a political party. It’s also not taking place on the streets and limited to walking, yelling and holding signs. This protest is all about the borders and confronting the Israeli occupation directly but peacefully. And one of the aspects I like the best is that it’s also designed to show the world the positive side of our culture, history, intellect and humanity, which are rarely mentioned in the Western media. The dabka dances, reading chains, mural painting and other cultural activities haven’t been covered much by the international press, but they are just as much a part of the march as burning tires.

I believe that, on average, at least one individual in every family has participated in the protests at one point—unlike previous demonstrations. For me, my first time to attend was April 6—the second Friday of the March—when I headed to the protest with a group of We Are Not Numbers members, where we planned to shoot a short video.

My first day at the protest

That Friday was one of the most adventurous days I have ever experienced. Westerners may have a hard time believing this but, as small as Gaza is, I’d never been as close to the Israeli “security fence” as I was that day. The area is usually considered too dangerous. But that day, I got close enough to see Israeli army jeeps and the hilltop where Israeli snipers hid, ready to shoot at anyone who came near. Nevertheless, a few protesters were brave enough to climb the fence and hang the Palestinian flag on it. I was really moved by a group of courageous Palestinian kids fearlessly flying their colorful kites nearby—not with Molotov cocktails attached, as have been flown by some of the angrier youths, but simple symbols of their desire for freedom. I could see hope shining in their eyes.

My participation in the Great Return March reminded me how important home is for all Palestinians—even if we cannot visit, much less live freely, there. The Israeli occupation has tried to render our concept of “home” meaningless, yet we refuse to give up. We will never cease to protest. That day, thanks to We Are Not Numbers, I rediscovered my bravery and deep connection to Palestine.

The first thing I saw at the march was an ambulance rushing to the area near the fence to rescue wounded protesters. The image of an injured young man bleeding on a stretcher while the ambulance sirens blared will haunt me forever. This brought home to me in a very personal way how meaningless and worthless our lives are to Israeli soldiers. One Israeli bullet steals a Palestinian’s life in a second, and all of his or her family and friends will mourn their loss forever.

The protesters have built a virtual town near Gaza’s eastern border with Israel. They have even built camps with tents similar to those put up for Palestinian refugees, my ancestors, when they were forced to flee their homes to make way for the creation of Israel. However, these new camps were built with hope and determination, not with fear and frustration. I love how the protesters hang the names of their original villages and cities on the sides of the tents. And how they proudly wear traditional Palestinian clothing. One of the scenes still etched in my memory is of a family sitting between stalks of grain while eating nuts and chit-chatting. One of their members prayed by the tents. And a barber wearing a traditional Palestinian costume offered his services. I love that the protesters are resisting the Israeli occupation peacefully by trying to create a normal, positive atmosphere in the same area where they are met with Israeli tear gas and bullets. The Great Return March reassures me that Palestinians will never break or back down. We are ready to sacrifice our lives for freedom and a decent life.

The price of patriotism

But…I have to admit: At the same time, my participation in the march filled my heart with deep disappointment and fear. I was depressed for almost a week after participating in the protest. I can best explain by describing a moment when a group of us from We Are Not Numbers waited for the cameraman to start filming. We were not close to the fence; we couldn’t even see it. We talked and snapped pictures until, suddenly, we heard loud pops that quickly recognized as bullets. Israeli soldiers were shooting—at people or in the air, we couldn’t tell. Everyone started to scatter and run, and my heart hammered in my chest. I felt as if it was Judgment Day! I couldn’t feel my knees after we stopped running. We spent more than 30 minutes trying to find one another after everything calmed down. The image of desperate people running never leaves my mind.

And yet some youths walked up to the fence intentionally and purposefully risked what is left of their lives. Most news agencies report how young guys die or are injured in the protests, but never say why they are willing to “throw away” their lives. The answer is this: They have come to believe their lives are meaningless. They are trapped in Gaza with no opportunity to travel (emigrate or otherwise escape) or even earn a living so they can fulfil the simplest of their dreams. Their past is full of mourning, their present is miserable and their future is unknown. Therefore, they prefer death to life. I still call them brave, although I would never do what they do.

I didn't dare go as close to the fence as a few guys did when I participated. I walked very slowly and carefully toward the fence, but never got close enough that the risk of being shot was high. Why did I hang back? After turning this question over in my mind, I came to this conclusion: The guys at the back, like me, probably have better lives than those at the front. Those at the front don't have anything to lose.

And what about the Israeli snipers? I wonder: For them, is it just like playing a computer game such as Counter-Strike? Is it good shooting practice? Do they even think about the people they kill, or do they simply go home to their families, have dinner and sleep peacefully?