Feeling Numb While Waiting for War 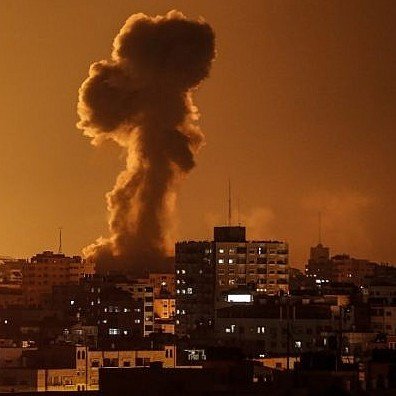 Gaza seems to be on the edge of war, yet I feel numb.

Life in Gaza is unpredictable and challenging. Whenever I feel that things will settle down, Gaza proves me wrong. This morning, I woke up to the sound of Mom's voice speaking with one of her teachers, who was apologizing for not attending a mathematics-education workshop. Mom replied, saying, "Hopefully nothing will happen. Stay safe, my dear." Once Mom finished her call, I asked her what was wrong. She told me a rocket from Gaza had hit near Tel Aviv and her teacher, who doesn’t live in Gaza City, preferred to stay home in case Israel retaliated.

Honestly, hearing this news didn't scare me. I just felt numb. I reassured myself it would be an intense, horrible night as usual, then things would calm down again. I went back to sleep, but suddenly woke up to the sound of thunder, which I thought was a bomb.

I fumbled for my phone, laying on my chest of drawers next to my bed. The first thing I saw on my Facebook and Instagram feeds were news and photos of the rocket and Israel’s threats to punish Gaza. I thought, “Well, this is the norm.” Whenever there's a rocket, Israel threatens to respond and vice versa. I asked myself, “What's new? What's different this time?” I repeatedly checked my social media accounts until a news WhatsApp notification popped up. It said that schools, government offices and private businesses were being evacuated.

Still, I remained numb, as if nothing serious would happen. I got up, washed my face and headed to the kitchen to make some tea. I drank it with some pastries Mom had bought from the bakery yesterday. I couldn't heat them in the microwave because there was no electricity, but I'm very used to eating cold food, just as most Gazans are. I went back to my room to eat my breakfast to the rhythm of the rain.

As I sipped my tea, one of my friends, who knows that Elissa is my all-time favorite singer and public figure, sent me a screenshot of one of her tweets about Palestine. Translated from Arabic, it reads: "We are slowly losing the land of Palestine and we are just watching. Which law turns this land from a land of peace into a land of war?" Her tweet made my day. What warmed my heart more is how she reacted to Avichay Adraee, the Arabic division of the Israeli military spokesperson's unit. He responded to her tweet by blaming Hamas for everything bad happening to Gaza. Elissa shot back by tweeting, "The only way to respond to this rudeness is to block him." Thousands of her 13.3 million followers shared her tweet, using her powerful hashtag: #محتل_وقح, which means #rude_occupier. I love that Elissa spoke out for Palestine. I am normally glum about the prospects for a just peace, if more prominent public figures like her stand up for us, we have a chance.

Meanwhile, though, I still was pretending nothing was happening that was out of the ordinary. I ignored the bee-like sound of low-flying drones and the thoughts of possible war that seeped their way into my brain.

I was relieved when Mom returned home. She had bought more bread and other groceries than usual, in case we were confined to the house tomorrow. I thought about how to convince her to allow me to go the gym in the evening. I hadn’t gone earlier because there had been no electricity to charge my phone. My mother almost begged me not to leave, but I was determined to go to the gym. It's one of those rare places in Gaza where I feel at home and can release my stress.

A walk under drones

Before I left, I opened the windows of our house slightly, so they wouldn’t shatter if there were explosions nearby. I decided to walk to the gym instead of hailing a shared car. As I walked, it was obvious that today was not a normal day. Everyone was rushing to their houses, bakeries were crowded, some shops were closing, and taxi drivers listened to news on the radio. I could see the fear and nervousness in people’s eyes. Younger kids, though, walked fast and laughed while trying to spot warplanes or drones in our occupied sky.

I stared at them. Their laughter broke my heart. Children outside Gaza stare at the sky searching for the moon, stars, clouds, birds and maybe an airplane–not warplanes or surveillance drones. Kids in Gaza grow up too early; what's fun for them is horrifying for kids elsewhere.

You can never really predict what will happen at times like this. We ask ourselves if this is just an escalation or the start of another war. It’s hard to plan our day, so we typically pretend everything is okay. My heart goes out to couples trying to plan a wedding, knowing disaster could happen to disrupt it. It would be hard to allow yourself to get excited. War may officially have ended in the fall of 2014, but really, it silently continues. Life in Gaza and even the entire Palestinian-Israeli conflict seem like a revolving swing to me. They are endless. They revolve alternately rapidly and slowly for no purpose. They make you feel dizzy, lost and confused, as if you must find your way out of a dark labyrinth.

I arrived at the gym after walking for 40 minutes. I was surprised that it was almost empty. At that moment, questions rushed to my mind: Why are people taking this particular escalation so seriously? Why have we come to depend on tension to feel alive? Why do we always predict the worst will happen? Is it because we have adapted to living in distress and pain?

Suddenly, an intense bomb exploded, startling me from my thoughts. A notification from a news WhatsApp group popped up, informing me that Israeli warplanes had targeted an insurance and investing company in central Gaza. I wasn’t upset at all. I was only disturbed by my pervasive sense of numbness.

As an act of self-protection, I put on my earphones and turned on workout music with the volume up. I didn't want to hear any bombs.

I left the gym at around 7:45 pm. and was stunned to see the streets empty and most of the stores closed. Only a few passersby and cars were my company. I struggled to find a taxi to go home. I walked quickly, hearing warplanes and looking at the sky from time to time to make sure I would be safe. Scary thoughts haunted me at that moment, because it is impossible to know where Israel will bomb from moment to moment. I asked myself, “What if they bombed a car or a home close to me?” I prayed to God that I’d either die or get home safe and sound. When there's an escalation, I always pray that it ends in a ceasefire quickly and peacefully, or my family and I die together. I envied those people whose entire families died at one time in previous assaults on Gaza. I envied them because they don't have to grieve for each other.

When I stepped out of the taxi, I faced seemingly bottomless darkness accompanied by the sound of warplanes and drones. According to the schedule, we were supposed to have electricity. Yet every single store on the unpaved, muddy street that leads to my home was closed. I couldn't even see my fingers in front of my eyes and started to feel terrified. I turned on the flashlight on my phone, even though this is not good practice when you’re under attack. I rushed to the house and began reciting a few Quran verses and zikr [a form of devotion in which short phrases or prayers are repeatedly recited silently or aloud] for safety and protection. Thankfully, the electricity came on while I was opening our door.

I was so happy to see my family safe and having dinner. I washed my hands, put some food on a tray and headed to the living room to eat with them. Then, I prepared to take a shower. I hoped the sound of bombs wouldn’t make me break plates or fall down in the tub. I headed to my bed to read the news and continue writing this essay. I felt tired but wasn’t able to fall asleep due to the fear of waking up to the sound of bombs shaking my body and the whole house.

At night, people outside of Gaza fear ghosts, while we fear bombs. They look at the sky to enjoy the view of stars and clouds, while we reluctantly look at it to check if we will be safe. Life is not normal here, but we normalize it.