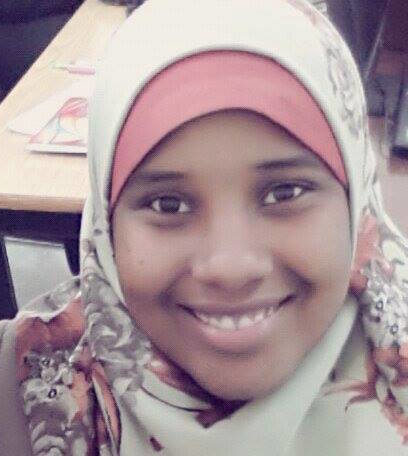 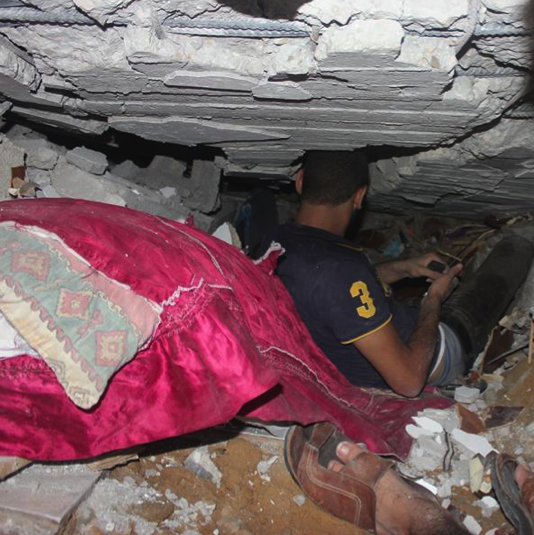 There is a long, vertical scar on the back of Amal's right arm. It extends from her wrist to just above her middle finger. Her left hand bears two or three scars as well. When a mutual friend introduced us and I shook her hand, I noticed her hand was a bit swollen as well. The scars seemed old but recent at the same time. They looked excruciatingly painful, but Amal's face showed no signs of pain or discomfort. I didn't shake her hand for long. I was terrified I'd hurt her if I pressed too hard. We quickly became close friends and when I asked about the scars, she told me the story of how the F-16s raided her home.

When the Israelis launched the first F-16 missile at Amal’s house, it hit the staircase. Half of the house, along with Amal’s mother-in-law, immediately exploded to pieces. Amal was in the other half of the house. She doesn't remember what she was doing when the bombs hits. A lot of memories of the assault were buried with the house. What she does remember vividly is that the place smelled like death. Amal's mother and brother-in-law were lying elsewhere in the house, lifeless. She couldn't see where they were, but when you know someone is dead nearby, you just feel them. All she could do was pray that she would be found soon.

"Pull back. Pull back. Someone is under there. Someone is still alive under there. Stop digging," the man kept screaming at the other who was operating the bulldozer. That man, who had bat-like ears, was able to hear Amal's voice from under the rubble of what was once her home. Amal was screaming, "Help, help, I'm down here! Please help." Somehow, Amal was finally able to make someone notice that she was there—alive, brutally battered, but very much alive. The man kneeled down and told her not to worry. "I'll get you out," he said and she clung to that promise like a baby clinging to her mother.

"I don't want to die from this big, ugly metal thing"; that was the only thing Amal could think of while hearing the bulldozers digging above. A metal beam from the roof, now inches from her heart, pinned her down. The weight of two-story concrete building was crushing her. She feared that if the weight didn't kill her, or the bulldozer, then the digging would destabilize the beam and it would puncture her heart. She had no sense of time. She tried to remember whether it was day or night when the bombing first started but couldn't.

Later, Amal didn't believe her husband when he told her she was under the rubble for three hours. To her, it seemed much longer. She keeps playing that day over and over in her head. She was alone in the house with her mother-in-law and her youngest brother-in-law. Her daughter was playing next door at her uncle's house. Amal's husband, his father and brothers had left for a friend's funeral just an hour before. Looking back now, Amal prays for the soul of that friend every day. If he had not died that day, then the whole family could have died. There were so many possibilities and Amal had thought of them all.

She may have physically survived, if we could call her family's loss and her excruciating injuries survival, but a huge part of her is still helplessly screaming under the rubble. It took her a very long time not to let those dreadful three hours consume every second of her daily life.

A day after the assault, Amal woke up to find herself in the hospital. Amal was conscious the entire time she was underground, but the minute she was pulled out, she fainted. The sudden change in pressure sent her body into shock and she fell into a deep sleep. She stayed in the hospital for 15 days. In addition to the injuries to her hands, she suffered minor burns on the left side of her body. She still hasn't fully recovered and she's in pain most of the time.

It took Amal and her husband a while to find a good apartment to rent. They stayed with relatives for a month before moving to their new place. A week later, Amal and her husband were sitting at the kitchen table having lunch when Mera, their 4-year-old daughter, came in to ask for her grandmother. At her age, she wasn't able to comprehend that her grandmother was gone for good. Mera was very attached to her grandmother, since the older woman used to babysit the girl when Amal was at school.

Amal tried to explain to her one more time that grandma was now happy in heaven. She stood up, kneeled down on one knee and grasped her daughter's shoulder gently, but her speech was interrupted by the loud and horrifying sobs of her husband. He was crying so hard she feared he might choke. She'd never seen her husband like this before. Yes, he had cried at the funeral and while they carried his mother's and brother's bodies to the cemetery, but it was only silent tears running down his cheeks. Amal was torn between comforting her child who had now started crying as well or soothing her husband. She was reminded once again of how strong she had to be for everyone around her. There was still life after all that death and she needed to live, at least for them.

One day, almost two months later, Amal and her husband came home from a doctor's appointment and decided to leave Gaza for good. They had had enough misery for a lifetime. Where to go is a major issue, but the truth is that it doesn’t matter. Anywhere is better than here, than Gaza. The decision to leave was inevitable because Amal still needs medical treatment that is not available in Gaza. But they also never want to come back. F-16s have that affect on people.

“My child shouldn't wake up to the sounds of drones every night,” says Amal. She and her family are leaving with the help of relatives to find a chance for peace and quiet for once. Huge parts of them will always be in Gaza but their future will be somewhere else.

Author's note: This story was inspired by a friend of mine who was indeed trapped under the rubble of her house for three hours during last year's Israeli assault on Gaza. It is 90 percent true, but I added some detail from my own imagination (based on the situation here) to fill in some gaps. One overall fact that is true: Virtually everyone in Gaza right now dreams of being able to leave, at least for a break.