They Ask Me About Palestine

Home » They Ask Me About Palestine 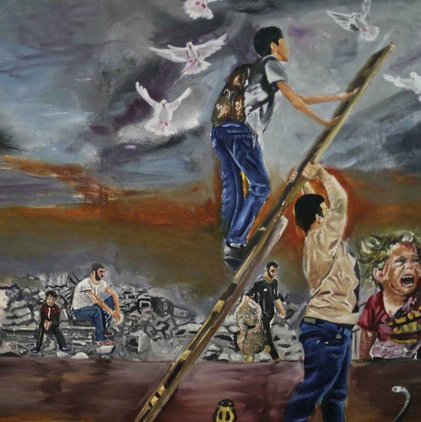 They ask me about Palestine,
what we have there,
what we live for,
and why it’s so special?

I shake my head,
looking for the words to explain:
We have both the bad and the good.

We have an occupation to oppose,
and to end.
We have checkpoints restricting our movement,
armed soldiers ready to shoot.
Armless citizens
trying to avoid being shot
while protesting the decade-long siege.

We have fighting factions—
brothers, uncles and fathers—
who warn us to keep our mouths shut.
Jails and jailers waiting for us,
if we speak up.
We have users, abusers and losers.
Corruption and patronage.

Hate has invaded us,
but we still have love.

We have an endless, azure sea
that gives us at least an illusion of freedom.
Fields of the world’s brightest red strawberries
and ancient buildings whispering
about a history once noble and proud.
Close-knit families, with faces of children still hopeful and proud.

We have a beautiful capital with a golden dome
that lights with the sun when it appears from the east,
where worshippers gather from everywhere.
Friday’s call for prayers merge into Sunday’s church bells.
In the same capital, we have Muslims, Christians and Jews
who drink the same carob, eat the same hummus,
speak the same Arabic.
White, black and brown tourists come and go,
Smiling and buying from the elders of Jerusalem.
In it, we have mosques, churches and temples,
where those with righteous hearts
kneel to God at dawn and pray
that hate one day will end.