Home » The return of the Apache 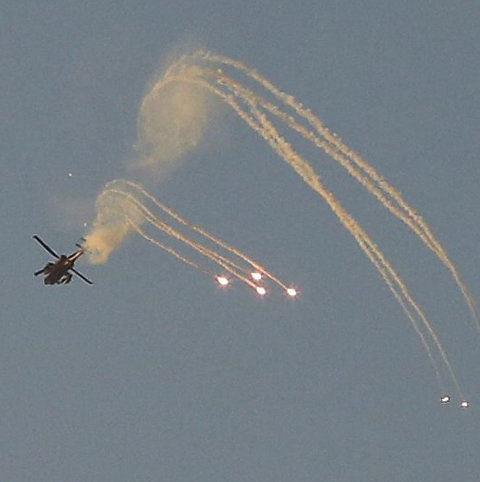 Like most children everywhere, I had a rich imagination, befriending everything from baby birds to characters that existed only in my mind. But what’s different about children in Gaza is that we have an intimate knowledge of Israeli missiles, tanks, Apache helicopters and F16s, which often made our fantasy worlds a bit sinister.

Drones are relatively new in our world, first invading my imagination during Israel’s 2008 war on Gaza, when I was 14. Before that, the Apache helicopter dominated both our play and our nightmares. During the Second Intifada, most of the assassinations of Palestinian leaders in Gaza were carried out by Apaches. I was in the first grade when the intifada began, and they were used to shoot at protesters. Apaches hovering in the sky over Gaza became a routine sight as I walked to school.

I still remember my first exposure to those killing machines. One day, just as I reached home after school, my older brother, Ayman, ran into the house, shocked by something he had witnessed. Ayman was 10 years old and I was only six. Protests were our routine during the intifada, but that time, the demonstrators ventured too close to the nearest Israeli settlement in my town of Dair Albalah—Kfat Daroom. (The 8,000 Israeli settlers were pulled out of Gaza later, in 2005.) Ayman described the grisly sight when an Israeli helicopter shot two of the men, amputating their arms and legs. During the rest of the Intifada, which lasted five years, seeing Apaches in the sky became a daily affair.

Seeing and hearing the buzz of the aircraft began to seem normal. I didn't really know fear yet; I was young. I liked how the Apache seemed to float in the air without falling. It reminded me of my dream of flying. I asked my parents and other adults how such a big, heavy machine could fly. I never received a satisfactory answer, until I studied physics in the 10th grade. I was amazed to learn how flight was possible and I earned a 100 percent in my class. The teacher thought I was a genius. I wasn't. I just was fascinated by planes.

We saw the Apache in our skies so much it lost its ability to terrify. Abdulaziz al-Rantisi, a leader of the Hamas resistance movement, told the media after an Apache assassinated his predecessor: "Are we afraid to die? It's death, it's the same thing. We are all waiting for the last day of our life, either by Apache or by cardiac arrest. I prefer to die by Apache." A few months later, he was assassinated by one. His near-prediction echoed in our minds for some time.

When the first Israeli war on Gaza began in 2008, it was the first time I felt truly scared of Apaches. It was on a Saturday in December of that year, and I was at school when an Apache flew very close by and targeted a site with multiple missiles. Fragments flew everywhere and we all ran home. That day, 300 Palestinians were killed, and the war was on.

It’s been 17 years since I first heard of the Apache, and five years since I heard or saw one. The resistance fighters learned how to shoot them down, so drones and F-35s took over—although now I hear the Israelis know Hamas can’t withstand another war and are getting bolder.

Yesterday, I was home in my bed, at 2 a.m., when I heard a familiar buzzing. I ran into the street and looked around, but couldn’t find it. I was joined by one of my friends, fearless and peering around. "Will it be war?" I asked. “No, it won't," he replied. "They will just target some sites and go away."

We talked a bit in the cold breeze, chatting about the attempted reconciliation between our two political parties. I shared my pessimism about the chances for success and he agreed. Then we looked up at the sky and the stars were too many and too bright. There appeared to be many meteors and shooting stars. I remembered the fairytale from childhood and said jokingly, "Let's wish for a safe sleep and a peaceful night." My friend smiled and said, "You’re such a child."

Then there was another shooting star, and another—this time bigger and faster. Except now I knew they weren’t meteors. A blast deafened me and the sky exploded into red. I felt a deep vibration, as if in my heart. The Apaches are back.