The female fisher of Gaza

Home » The female fisher of Gaza 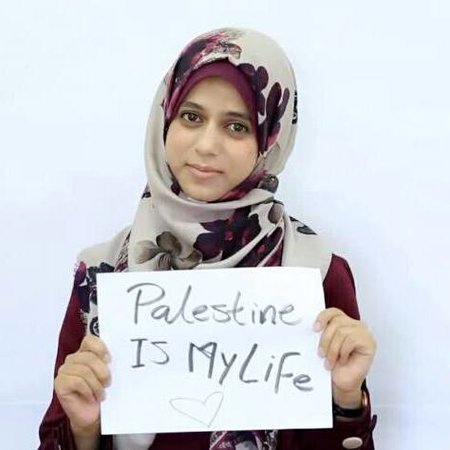 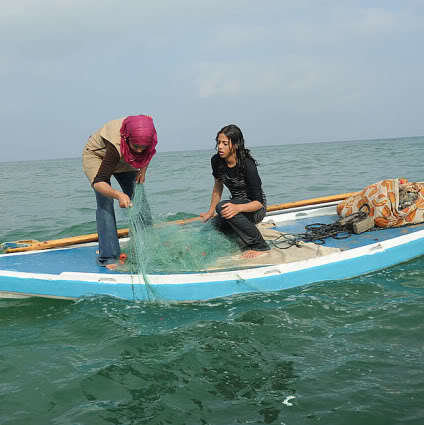 "The fishermen know that the sea is dangerous and the storm terrible, but they have never found these dangers sufficient reason for remaining ashore."— Vincent Van Gogh

I believe, if Van Gogh was alive and to say that today, he'd be describing Gazan fishermen.

If you visit the Gaza seaport, you will see a variety of young and old, black and white, and injured and disabled fishermen who come from all areas of the Strip, forming a large and lively community despite an Israeli blockade that limits how far boats may sail. And you'd probably be surprised to see a lone female fisher among the roughly 2,000 men, because in Gaza it’s a male-dominated profession.

This is Madline Kullab, the 21-year-old female fisher from Gaza. Because we are the same age, and since life on the sea interests me intensely, I interviewed her recently to find out more about life as a female fisher in Gaza. Madline took me to her favorite place on the seaport to talk—the rocks by the shore. Colorful walls and blocks, decorated with graffiti by painters from some youth initiatives, were behind us and the tranquil sea was in front. A group of fishermen were chatting with each other to our left.

"Fishing is an inherited job,” explained Madline. “My involvement started with my father. When I was a kid, he used to take me with him to the sea to help him. He was suffering from a disease since 1990, and it intensified when I was 13. He had to stop working, and because I am the eldest, and the one with some experience in fishing, I took his place."

When she first started, she said, “I faced some difficulties with people who didn't know me when I was a kid. Most of the young fishermen, policemen and others didn't accept me, since I was the first, and only, girl to occupy such a job. I had to prove myself and hold on until I earned respect. With the flow of time, they came to know me and things got easier. Nowadays, the relationship between me and my co-workers is very fraternal. We're one strong and loving family."

Madline pointed at a man sitting next to her. He had sharp eyes, a dark tanand black hair, and he looked to be in his 40s. She said, "Mr. Zakariyya is one of the people who helped me the most to endure all the hardships I faced." I looked at him curiously so he smiled and said, "I'm a father more than a friend of hers."

Zakariyya, or Abu Ayed, as everyone he knows calls him, is the coordinator of the fishermen's committees, a member of the Union of Agricultural Work Committees and a friend of Madline’s father. He stood by her side during all of the hardships and taught her the fishing process step by step. "I used to take her with me when I went fishing to teach her how to be a professional fisher,” he recalled. “We mostly depend on the fishing nets in this job. We first prepare the nets and make sure of their quality before throwing them into the sea, often with the help of other fishermen. The steps seem pretty simple, yet the process is difficult. It takes as long as 48 hours to collect a good catch, and it requires patience and physical strength."

Abu Ayed added that although Israel’s blockade on the Strip allows fishing only six nautical miles offshore, when the best fish are 12 or more miles out, the fishermen still manage to catchsardines, shrimp and different types of mullet. And they add a unique touch to the fishing process with their folk songs and chants, often invented by the fishermen themselves. When they throw their nets into the sea, or when the harvest is large, they start cheering or singing songs like, "Wele'dda? Bedhasardeen. Weldar? Walamalleen. WeljebaBedhadananeer" (What about equipment? It lacks sardines. And the house? It lacks money. And the pocket? It lacks pocks].Another goes like this: "Sallisalli, 'ala el-nabi, salli w soom, el-rezqydoom…" [Say peace be upon the prophet, pray and fast, so that the profit may forever last.]

Abu Ayed looked at Madline and said, "Madline herself is a story of struggle. From the beginning of the job she was one of the most professional in using a rowboat. She was just 8 years old when she tried it the first time."

Of all the difficulties with which Madline dealt , whether on her own or with the help of her family and Abu Ayed, there was one she could not solve: the Israeli occupation. "I can't recall all the dangerous situations I've been through while fishing,” she recounted.“Every fisherman [who] gets close to the border region [will] have his fishing nets or boat confiscated, and be shot or even detained by the Israeli naval forces. Personally, I had my fishing nets confiscated once and I have been fired at many times. So I try to avoid sailing near the six-mile mark."

Abu Ayed continued, saying, “During the last war, all the fishermen collected their boats and other materials on the shore and hid them in their rooms [a group of rooms built beside each other in a building, where each fisherman keeps his fishing equipment and other personal belongings]. But the Israeli navy targeted the rooms and caused great losses to all the fishermen. Madline lost her two boats."

There's a lot about Madline people don't know. Behind her tough and stubborn personality, there is a girl who likes to embroider, design clothes and swim. In fact, she was chosen as the representative of Palestine for a swimming championship held in South Africa. However, the blockade of Gaza prevented her from travelling to participate in the contest. Madline also is an activist who has met with a number of national and international notables who have visited the Strip.

As I got ready to leave, I asked Madline how she sees her relationship with the sea. Both she and Abu Ayed agreed that, "a true fisherman is like a fish. If you take him away from the sea, you're taking his life out of his body." As for the future, she said, " I wish I can stay here with the sea. No matter how much I have endured, and how much I will, I'm always ready for more."