Everything but a Homeland

Home » Everything but a Homeland 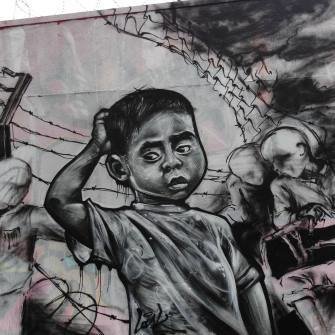 I left Gaza for Chile, and I love it here. It's safe and free. But it will never be Palestine.

I am in a geography class,
in a country to which my parents immigrated years ago,
from a city I never knew,
after a war waged.
My classmates come from the Far East and Africa,
others from South and Central America.
They are brown, black and white.
They are Muslims, Christians and Jews.
Most are documented,
but others aren’t.

My teacher, balding and wizened,
was ordered to leave his homeland
after he opposed the government with his writing.
I thought he was so happy after coming here by boat,
but I later learned he was so sad.
He had everything but a life in his homeland.

We open the book for a lesson
called “the crises of the world.”
The teacher asks,
“Where are the crises?”
I raise my hand and point at the map on the wall.
They are in the east and the west,
in the north and the south.
The crises are everywhere…