Peace is a luxury

Home » Peace is a luxury 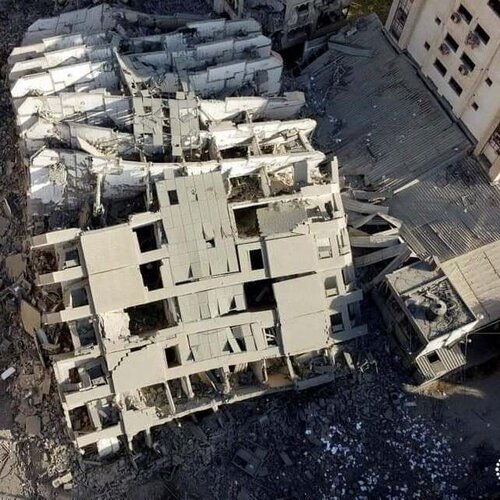 Last night, I went to a shop owned by a friend to purchase a keyboard for my computer. The shop is also an internet café equipped with about 30 computers on which kids play games, especially the widely known PUBG (playerunknown’s battleground). Because electricity is off most of the time in Gaza, unemployed, tech-savvy youth make a bit of money by opening such spots, where the computers run using solar power that isn’t affordable for most Gazans. During Ramadan's hot daylight fasting hours, kids gravitate to these oases of entertainment.

My friend, Alaa, was busy servicing his store’s internet network, and children were loud, so he asked me to wait a bit. As I waited, I eavesdropped on the kids playing video games. One child jokingly said to his fellow player, “We don’t need to worry about waking up for suhoor (the early morning meal during Ramadan, before fasting begins). Israel will keep us awake.” Heavy Israeli airstrikes had hit the Strip all day, in response to our own protest of the brutal treatment of our fellow Palestinians in East Jerusalem. Another kid laughed and replied,
“Ramadan is almost over. You mean it’s Israel’s time to give us Eyiddya (money given as a gift at the end of the Muslim holiday).”

Over half an hour passed and I was still sitting at a wooden bench in the store when a father came in looking for his son, who was playing a game. The father approached the child, about to scold him for staying out that long at such a dangerous time. Alaa tried to stop him, but the worried father started yelling at him for remaining open in the midst of the attacks: “Are you crazy? You’re still open? Aren’t you human?” Alaa replied, “I’m human, and I have three kids myself. Just as you’re worried about your kid, I’m worried about mine too. But this store is my only source of income. You want me to go home and then what?” This short dialogue sums up a lot of what’s happening in Gaza right now.

Here we go again in Gaza: another escalation that seems to on the verge of escalating into a broad military confrontation no one desires. So far, over 28 Palestinians have been killed in Gaza, including nine children. And no one is winning. To say I'm shocked or surprised would be both delusional and dishonest. This is how wars happen, or at least that's how they start.

For weeks now, Israel has been broadening its colonial enterprise by preparing to evict the Palestinians of the Sheikh Jarrah neighborhood in East Jerusalem, then replace them with Israeli settlers. This is all backed by the Israeli judicial system and is conducted in a highly organized, democratic-looking manner. But it's not. It's outrageous. It's unacceptable. It's unjust. It's inhumane.

It seems that Israel is not satisfied with the below-the-radar war it constantly wages against Gaza—including a sea, land and air blockade—and the West Bank. In front of the media’s cameras, Israel rushes to say that all it wants is peace, that it is merely defending itself against our attacks. Yet at the same time, it kills every chance of hope on the ground. It's so easy to claim you want peace when you're a strong occupying power with nukes and a robust economy. We, however, are trying to eke out an existence with very limited resources. Still, we are not willing to give up our dignity. And Jerusalem is at the center of our culture and identity.

Afaf, a 19-year-old who studies English literature at Al-Aqsa University in Gaza, tells me: “Jerusalem is the only place that I feel I belong to. It's home. My heart clings to it like an olive tree rooted in the sand. In my art classes, I always draw Jerusalem and Dome of the Rock surrounded by barbed wire. When my family and I go to the beach, our sandcastle is the Al-Aqsa Mosque."

Personally, I share a lot of her sentiments. But I do not fully understand what attaches me to Jerusalem. I was only able to visit Jerusalem once, about three years ago, when I traveled there for a visa interview at the U.S. Consulate. I was required to remain in a shuttle bus that took us from the Israeli Erez crossing to the U.S. embassy. We waited for our turn for the interview and we were not allowed to go anywhere else once we finished.

Still, the brief moments I had felt unique and special. The Jerusalemite bus driver seemed to relate to what I was feeling and told me I could stand outside the vehicle for a few minutes until the other passengers finished their interviews. I laid my elbows on the handrail surrounding the embassy building and felt like I was in paradise. I wanted more. Later, when I was able to travel to the United States, I lived in New York City, D.C., as well as cities in Virginia and Ohio. But none felt like Jerusalem.

That’s why when I see Jerusalem attacked, I feel outrage like other Palestinians. It’s like seeing my mother be assaulted in front of my eyes. Jerusalem is a symbol for Palestinians.  It’s an icon that embodies our culture, our identity, our rights. Yes, Israel has separated and divided us, politically and geographically. We’re scattered all over the world. We differ on various issues and we are often hard-headed in our division, but Jerusalem will always unite us.

Where will this current conflict go? Perhaps to a situation neither Israel nor Gaza actually wants. Certainly no one in Gaza genuinely wants a war in which Israel flexes its muscles and creates thousands of victims, like in 2014. But perhaps Israel will only be forced to reckon with our needs when peace becomes a luxury to Israel as well. Maybe.